The Reserve Bank Act of 1959 is not the most riveting piece of legislation. But it does set out in pretty clear detail the key jobs of the RBA.

There are three of them. They are the stability of the currency, "the maintenance of full employment" and "the economic prosperity and welfare of the people of Australia".

In more-layman's terms, this means ensuring inflation is under control (between 2 and 3 per cent over the economic cycle), an unemployment rate that doesn't drive up the inflation rate above that 2-3 per cent target but which also means people can get a job, and generally steering clear of economic disasters. 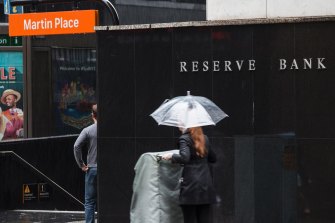 There’s only so much the central bank can do in the face of a massive epidemic.Credit:Louie Douvis

Globally, central banks have similar types of missions (although Australia is rare in having an inflation and jobs target).

All of them use a variety of measures to achieve these goals. The most obvious is the movement in official interest rates but, as the global financial crisis showed, they can also engage in unusual measures such as the the purchase of government debt.

Another avenue is known as "jawboning". This could be talking up a particular point or signalling what the bank thinks about a particular issue.

For instance, former chair of the United States Federal Reserve Alan Greenspan famously talked about "irrational exuberance" in a public speech in 1996 that was aimed at dampening the then sharp lift in asset prices that culminated in the dot.com bust of 2000.

But what happens when key elements of a central bank's toolbox are useless? We are now finding out.

In the wake of the global financial crisis, central banks slashed official interest rates and engaged in various forms of quantitative easing – pumping money into economies by buying government or commercial debt – to prevent the economy from seizing up.

Almost 12 years on from when American investment bank Bear Stearns collapsed, central banks are facing a different type of crisis that is threatening the same sort of financial disaster.

Most central banks are in a far weaker position than they were in 2008.

The Reserve Bank had official interest rates in this country at 7.25 per cent when Bear Stears collapsed. By April the following year it had cut them to 3 per cent.

This time around, the RBA was cutting rates in June last year in a bid to get the unemployment rate down in a move designed to put upward pressure on wages. When the World Health Organisation first noted a coronavirus "cluster" in Wuhan, China on January 9, the official cash rate was 0.75 per cent.

The bank believes it cannot take the cash rate below 0.25 per cent. There's really no interest rate ammunition left in the clip.

And that's predicated on the assumption that a further cut in interest rates will do any good.

Making it easier to borrow won't help a business or a prospective home buyer if the entire economic system isn't working on account of supply and demand issues.

The decision at the weekend by the Morrison government to effectively shut down the international tourism market by forcing people coming into Australia to self-isolate for 14 days is a health measure with very real economic implications.

More cuts in interest rates won't encourage people to travel if that travel amounts to being stuck in a hotel room for a fortnight. They won't encourage the operator of Wally World to develop a new ride if there aren't any visitors.

This is all before a suite of even more draconian measures aimed at preventing the spread of coronavirus hits other parts of the economy.

For the past 30 years, politicians and central bankers have believed institutions like the RBA can run the economy. Nips and tucks to interest rates were all that were needed, with fiscal policy treated like some sort of financial black sheep.

Central bankers were masters of the economic universe – the He-Man and She-Ra of financial control.

But there's no magical power that can solve a shutdown in travel or help maintain spending patterns when hundreds of thousands of people are confined to their homes for fear of passing on a virus.

The limitations of a central bank are now on full display. The RBA on Monday did what it could (announcing plans to engage in quantitative easing) but it – like most of us – must wait for the coronavirus outbreak to come to an end.

This is a crisis that won't be solved in Martin Place. More likely, the answers will come out of a laboratory.

Normal operating procedure for the RBA is now tied to the fortunes of self-isolation, economic shutdown and the ability of people to sneeze into their elbow.