Film actors are judged in so many ways: the box-office take of their movies, the possibility of awards nominations, the scale of their luxury endorsements, or whether you forgot to eat your popcorn because you’re so utterly entranced by what they’re doing on the giant screen in front of you. But sometimes success simply means they made the ludicrous appear plausible.

In other words, take a bow, Lupita Nyong’o. In the new espionage thriller The 355, the Kenyan-Mexican actor plays one of a stacked deck of covert female operatives fighting a doomsday scenario. Nyong’o goes full cyber-geek as Khadijah Adiyeme, a former MI5 agent who can not only throw a punch but run a complete spectrum of digital operations from her keyboard. Could you casually pull off the phrase “parallel infinity-bit encryption systems”? Lupita Nyong’o can. 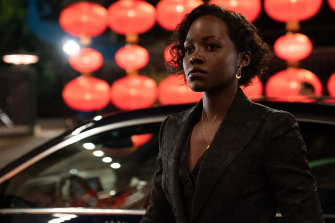 “You just gave me PTSD because those lines were not easy, my friend,” Nyong’o says. “That was the most difficult bit of the role – all this tech speak and acting like I knew what I was talking about. All of those words make sense on their own, but putting them together it was like, ‘Wait, what?’”

To be honest, I tell Nyong’o in our Zoom call, her frantic hacking-the-enemy’s-hard-drive typing also looked quite authoritative.

“No hand doubles – just me,” she declares, laughing at the memory of being on-set and on the spot. “I just remember feeling very self-conscious because when you’re filming you can’t see the screen. If you’re lucky, you’ve seen a mock-up of what it might look like. You’re making it up as you go and it can feel silly.”

The 38-year-old Academy Award winner, whose previous credits include 12 Years a Slave, Black Panther, Us and the last Star Wars trilogy, looks impeccably well put together. She’s wearing a vivid floral patterned shirt that has a Jackson Pollock botany vibe and royal blue detail that matches her nails. But Nyong’o is not afraid of self-deprecation and her laugh has a gusting, inclusive enthusiasm. She is serious about the work, but quick to poke fun at herself. 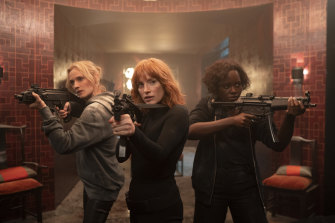 Somewhere, she says, there is video footage of her practising a stunt from The 355 where she had to wear a safety harness and leap from one platform down several metres to another – not an easy procedure when you have a fear of heights. During the first practice leap, Nyong’o admits, she screamed for dear life, but she kept climbing back up and jumping again. In the film she looks graceful and purposeful, a woman more than ready to do what the movie business has traditionally considered a man’s job.

“I got on board because I hadn’t seen a film like this and I wanted to see a film like this. I wasn’t even aware that it didn’t exist, but once it was bought to my attention I was like, ‘Of course!’” Nyong’o says. “We learn so much by example, right? We learn so much when we see ourselves mirrored. If you can’t see it you can’t be it. The fact that now you have these women as spies at the helm of a movie, I hope it gives people an epiphany.”

The idea for The 355 began at the 2017 Cannes Film Festival, where Nyong’o’s co-star and producer, Jessica Chastain, was serving on the jury. The French seaside city was plastered in promotional posters for upcoming blockbusters, including action franchises and spy thrillers headlined by men. Where was the female equivalent, Chastain wondered, and who would fill the lead roles in this sharp-as squad?

A conversation between Chastain and frequent collaborator Simon Kinberg, a writer and producer turned director whose blockbuster credits included The Martian, Mr & Mrs Smith and numerous X-Men instalments, swiftly moved the idea from concept to creation. The pair reached out to women they’d long wanted to work with: Penelope Cruz, Diane Kruger, Bingbing Fan, and Nyong’o. Those names got them advance sales financing, while letting the actors have input to the scripting process between Kinberg and playwright Theresa Rebeck. 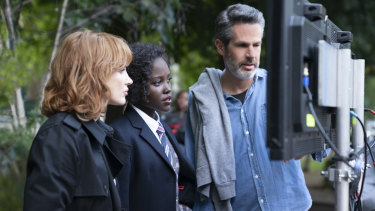 Jessica Chastain and Lupita Nyong’o on the set of The 355 with director Simon Kinberg.

“I was definitely interested in Khadijah as coming across as intelligently as she was written, because the people who hold these jobs have a large threshold for stress and are extremely focused and surgical in the way they move through the world. But I wanted to have glimpses of the other parts of her life because you’re not just your job. Her having a tenderness and vulnerability was important to me because we all do.”

The 355 marries Hollywood’s commercial instincts to a welcome act of female representation. It’s a slick first step, but there is added resonance for Nyong’o in that she brings a woman of colour to this star-studded project. Having been part of Black Panther, which used an African lens to broaden the Marvel template, Nyong’o knows how audiences respond to seeing themselves on the screen in new ways. 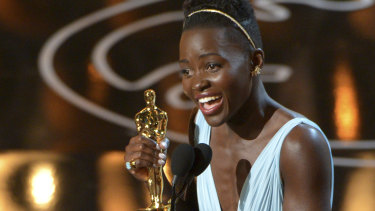 Lupita Nyong’o receives an Oscar for best actress in a supporting role for 12 Years a Slave. Credit:AP

“It’s fresh, but the truth is I think our entertainment industry is behind reality. We’re trying to catch up with reality because black people are doing all sorts of things in all sorts of arenas,” Nyong’o says. “There’s a morphed sense of what reality looks like when it comes to entertainment. Everyone is doing everything! This world is growing more and more global and multicultural. The old rules do not apply.”

While there are harried chase scenes and high velocity fire-fights, the film also weaves in some subtle thrusts. It’s not coincidental that it’s a group of female spies who take responsibility for fixing a disastrous situation, and that in turn makes them outcasts in their institutions. Note also how one woman tells another to stop apologising for the wrongs committed by a male colleague she trusted.

“No good deed goes unpunished, isn’t that what they say?” Nyong’o says. “When a film is doing the job of lending itself to the world we live in, it’s shedding a light on what we take for granted or haven’t examined. We have the opportunity with film to shape the societies we want to live in. It’s a soft power, and we have to use it to our advantage.”

Nyong’o has always had a clear perspective on herself and the world. She was born in Mexico because her parents had left Kenya due to political unrest, and her politician father was teaching in Mexico City. Her family returned to Kenya before Lupita turned one, and she grew up in the suburbs of Nairobi amidst artistic endeavours. School plays turned into professional acting roles, but in her twenties after she felt lost trying to build a character for an acting showcase, Nyong’o decided she needed to address her shortcoming as a performer.

“I was bad. I didn’t have the tools to get better,” Nyong’o readily admits. She enrolled at the Yale School of Drama, winning awards for student excellence before graduating in 2012. The following year the British filmmaker Steve McQueen would cast Nyong’o as Patsy, a slave tortured to the point of self-destruction on an antebellum plantation in his coruscating period drama 12 Years a Slave. She starred alongside Chiwetel Ejiofor, Michael Fassbender and Brad Pitt, and the role won her the Academy Award for Best Supporting Actress.

True story: Nyong’o’s extended family is full of kin making their mark. Her father went on to become a senior Kenyan politician while her mother runs a communications company. There are scholars, medical specialists and entrepreneurs. Sometimes Nyong’o feels like an underachiever – “my cousins will be like, ‘She’s just doing that thing on TV’,” she says.

Familial self-doubt aside, her career since has been a deft mix of event movies and independent releases. In 2018 Nyong’o spent time in Sydney shooting Abe Forsythe’s zombie comedy Little Monsters, in which she earned an AACTA nomination for her performance as a truly committed kindergarten teacher. She began every day with the Bondi to Bronte cliff walk and finished it with “amazing food”.

“Sydney did its job,” Nyong’o notes admiringly, and she’s done likewise in recent years. Nyong’o has learnt how to use her acting role and media profile – in consecutive months in 2020 she was on the cover of British Vogue and in the Forbes list of the 50 Most Powerful Women in Africa – to enhance her advocacy for those dealing with sexual harassment and anti-poaching initiatives. She’s written a children’s book, Sulwe, about understanding skin complexion, as well as producing and narrating documentaries. Just don’t tell Lupita Nyong’o she’s found her balance.

“Balance is a really generous term. I don’t think I could claim that,” she says. “I was reading Gabrielle Union’s book recently and she was saying balance doesn’t exist – it’s a fallacy, a fabrication. It’s more like a see-saw and you have to learn how to be comfortable on it. So just stay on the see-saw is my new modus operandi.”