In the lush subtropical hinterlands behind Noosa Heads, 90 minutes north of Brisbane, a short dirt road takes you to the home of one of the pre-eminent artists of the last century. 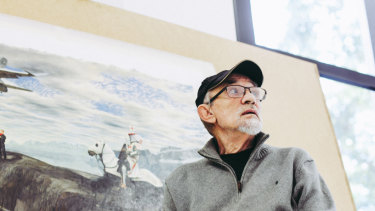 Peter Phillips in his Noosa studio.

In a large, bright studio, down a short incline from the home he shares with daughter Zoe and her partner, Peter Phillips – who made his name in the early 60s in the vanguard of British pop artists along with Derek Boshier, Allen Jones and David Hockney – continues to paint.

Along with large, more abstract recent works and some of his earliest sketches, a few of his most famous pieces are here, including the giant Art-O-Matic Loop-di-Loop, which featured on the cover of a 1984 album by the Cars called Heartbeat City.

But Phillips left behind the style which made him famous, and which he helped pioneer, a long time ago. “I definitely don’t favour the early work,” he says. “I am excited about some of the newest pieces, possibly because it is what interests me most at the moment.”

This weekend (May 18–19), Phillips, who is celebrating his 80th birthday, will open his studio to the public as part of the Noosa Food and Wine Festival. And despite whatever misgivings he may have, the event is called POP!, even though the work on display spans his entire career.

Phillips will always be associated with his early work, even if he refuses to be defined by it. But that’s not his concern. “I’ve continuously evolved and done what I wanted to do, not what other people wanted of me,” he says.

Phillips grew up in Birmingham during the Blitz. “I still get chills when I hear the resemblance of an air raid siren,” he says. “I don’t recall much detail from those early years, but I do recollect burning houses.”

Militaristic themes appear in his latest work. On an easel in the studio, a new painting depicts a fighter jet being loaded with ammunition on one side. On the other, a grinning Ronald McDonald holds a microphone; in between, a young woman poses for a selfie. Two men in overalls carry a crucifix; a piglet suckles from its mother; small explosions erupt in the background.

In work like this, Phillips appears to be exorcising old fears. In 1980, he says, “I composed a painting called Mediator 3 which features a rather large python, the taxidermy model of which was in my studio at the time. I had a profound fear of snakes, and thought if I painted one in detail, it would help. It didn’t help. In that same piece, I also painted a burning house. That didn’t help either.”

His early work wasn’t so grim. In the late 1950s, he attended the Birmingham School of Art, where he learned to paint, before moving to London and the Royal College of Art. There, he says, he was told how not to paint.

He rebelled. So did many of his peers. Allen Jones was thrown out, and Phillips came close. “If you were a talented artist at the time, you were expected to paint landscapes, still life, portraits, and so on,” he says.

Instead, Phillips and his friends he paintings began creating work that was vibrant, eye-catching and obsessed with popular culture and commercial iconography – a reaction to the stuffiness of the times.

His teachers were aghast. “They couldn’t believe people would be concerned with this stuff. Some were irrationally angry,” he says. Lawrence Alloway, the art critic who Phillips met after winning a Harkness Fellowship to New York in 1964, dubbed it pop art “because it was popping off the walls”.

Phillips says “I was very stubborn – still am. I knew what I wanted to do, but I also knew I needed to be a good boy and play the game. If you win, you get to make up your own rules.”

By that definition, Phillips has won. In Australia courtesy of a Distinguished Talent visa from the federal government, he ironically now works on large landscapes with abstract features, as though rebelling against his past, even if some of the old obsessions still feature.

Don’t ask him what any of it means, though. “What you see is what you get. Don’t even try,” he advises. Much of its power, though, lies in its ambiguity and juxtapositions of contradictory imagery and information.

Everything on display in Phillips’ gallery is from his own personal collection. Some of it, he says, is sentimental, while other pieces are unfinished. The rest is in galleries and private collections in Europe and America. “This is the first time so much of my art is in Australia.”

Previously, he’s lived in Majorca, Costa Rica and Switzerland. Why Noosa? “The weather. The people. The nature. The food. The clarity of light,” he says. “The older I get the more I like the quiet and prefer nature over cities. And I don’t like neighbours.”

Pop! opens at the Noosa Food and Wine Festival on 18 May.