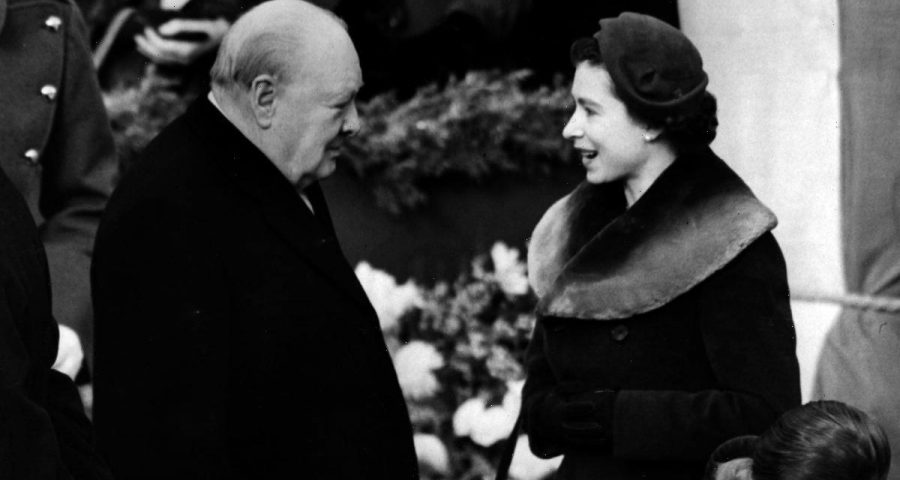 They are two of the most famous British families of the 20th century: the House of Windsor and the House of Churchill. And they have been inextricably linked for an incredible three centuries. Earlier this week, Sir Nicholas Soames told the BBC his grandfather Winston Churchill had not only revered, but adored, the Queen.

The Second World War leader, who had returned to power in 1951 aged 76, was there to greet Her Majesty when she landed at Heathrow Airport having returned from a royal tour of Kenya with Prince Philip where she had learnt of her father’s death.

In the first years of her reign, the ageing statesman became someone the youthful Queen could trust, taking a paternal interest and advising her in their regular audiences.

During these meetings, there is no doubt they grew genuinely fond of one another.

Winston was one of the few people the young monarch could relax with; although courtiers could not hear what was being said, they recalled peals of laughter coming from the room.

The attractive young woman brought out the mature politician’s chivalrous side.

He once told his doctor: “All the film people in all the world, if they had scoured the globe, could not have found anyone so suited to the part [of monarch].” 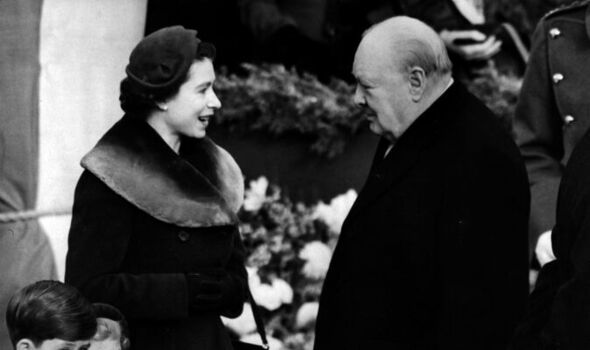 Showing how highly she valued her first premier, when he was leaving Downing Street for the last time in 1955, the Queen and Prince Philip came to dinner at No 10 – an unprecedented mark of her esteem for the ageing statesman.

Similarly, when Winston died 10 years later aged 90, Her Majesty attended his state funeral at St Paul’s Cathedral. It was a rare honour because the Sovereign by tradition did not attend non-family funerals.

Breaking the precedent for her old friend and mentor, as Winston’s family arrived at St Paul’s, she was already in her pew, waiting quietly to pay her final respects to Britain’s best-loved statesman. But the bond between the Royal Family and the Churchills did not begin or end with Winston’s death.

Three centuries earlier, the family’s rise to a dynasty began when courtier Sarah Churchill became the favourite of Queen

Anne and subsequently one of the most influential women of the age. Sarah and her military hero husband John – his string of victories beginning with Blenheim in 1704 – were created Duke and Duchess of Marlborough in 1702.

Two centuries later, Winston’s beautiful American mother Jennie became a mistress of King Edward VII. While he was still Prince of Wales, it was rumoured she had a lift installed in her London house to take her plump lover from the ground floor up to her boudoir.

As the baton passed to the next generation, Winston became a trusted ally of Edward VIII and one of his loudest cheerleaders in Parliament and a staunch supporter, especially during the Abdication crisis.

Winston lunched with the King on the day of the Abdication when Edward finally gave up the throne to marry Wallis Simpson, and inserted at least two phrases into the departing King’s final broadcast. However, while their closeness might have poisoned his relations with the King’s successor, George VI, the pair would forge a firm friendship.

During the Second World War, Winston’s allegiances changed, as he swung behind George and his wife Queen Elizabeth, the future Queen Mother.

The triumvirate formed an enduring bond as they rallied Britons from the balcony at Buckingham Palace through tragedies to ultimate triumph. And following the King’sdeath in 1952 aged just 56, Winston began a close relationship with Elizabeth.

Perhaps one of the reasons the wartime leader was so fond of the Queen was that she was just a few years younger than his youngest daughter, Mary. She also showed a similar sunny, equable temperament.

Born in 1922, Mary had a regal air and was a source of stability within her family. Like the Queen, she had wanted to do her duty in the Second World War.

While the Queen was driving trucks, Mary had a stellar career as an Auxiliary Territorial Service gunner girl. They married in the same year and both had long loving marriages. Mary wed Christopher Soames at St Margaret’s, Westminster in February, 1947, while the Queen married Prince Philip at Westminster Abbey in November.

The following year they became mothers, as Princess Elizabeth’s first son, Prince Charles and Mary’s eldest child, Nicholas were born in 1948. It was hardly surprising that as they grew older not just Mary and Elizabeth, but Charles and Nicholas developed a strong friendship that endures.

The relationship between the Queen and Churchill’s daughter grew closer when Christopher Soames was made Britain’s ambassador in Paris in 1968. Before taking up the posting, the Soameses were invited to stay at Sandringham and Balmoral. Surrounded by members of the Royal Family and corgis, Mary found the atmosphere surprisingly relaxed.

At Balmoral she played the card game “Racing Demon” with Charles and visited Queen Elizabeth, the Queen Mother, at her neighbouring estate, Birkhall.

The Queen Mother was particularly fond of her. After spending the afternoon together, they both nearly cried when the Queen Mother played “Auld Lang Syne” on the gramophone before they said goodbye.

During their time as Britain’s diplomatic first couple in Paris, the Soames reciprocated by hosting the Queen when she made a state visit to France in May 1972.

The ambassador and his wife were determined to put on a spectacular show for their monarch. Not to be outdone by the splendour of French President Georges Pompidou’s dinner for the Queen at the Palace of Versailles, Mary and Christopher staged one of the grandest occasions in the British Embassy’s history.

The white-tie ball for 1,200 guests mixed the great and the good, the old and the young, with Prince Charles acting as host to the jeunesse dorée.

There was absolute silence as the Queen, in full evening dress, entered the ball.

Everyone wanted to be introduced to her, but Christopher Soames skilfully steered her down the long line of guests. After the formalities were over, music played by the band filled the huge marquee and shortly after midnight, the Queen suggested to President Pompidou that they might lead the dancing. Perhaps the one disappointment of the memorable evening was when he blushingly declined.

The friendship between the two families was not just during good times. In times of loss they supported each other.

When Mary’s beloved husband died in 1987, Prince Charles attended his funeral. The heir to the throne’s kindness at this time meant a great deal to her.

Mary had first met Prince Charles when he was a schoolboy and, as he became a close friend of her son Nicholas, she felt she had got to know him as a “real person”.

Marking the deep respect the Queen had for her fellow matriarch, in 2005, Her Majesty made Mary Soames a Lady Companion of the Order of the Garter.

It was the culmination of Mary’s distinguished public life, and by bestowing the oldest order of chivalry in the country on her contemporary, Her Majesty revealed how much she valued her.

Looking regal in a midnight blue velvet mantle displaying the heraldic shield of St George’s Cross encircled by the Garter, Mary walked in the prestigious procession from Windsor Castle to St George’s Chapel for the service of thanksgiving.

She was becoming a member of an elite group that included former prime ministers, dukes and generals. Winston had been a Knight of the Garter and so, when Mary was appointed, the Churchills became the first non-royal father and daughter ever to have held the honour.

With so much shared history, it is highly fitting Sir Nicholas Soames should be taking to the airwaves at this sad time to champion his old friend as our new King.

It is what both his mother and grandfather would have done and, by doing so, he is continuing a long family tradition of loyalty to the Crown.

As Sir Nicholas poignantly recalled his moments with the Queen, perhaps it also made him think of his own outstanding mother, who also died after a long and fulfilled life at the age of 91 in 2014.