Some might be confounded by FX's hit mockuseries What We Do in the Shadows, a surprise Emmy nominee for comedy series. But its brains trust insists there's nothing to be confused about – at least nothing a toothpick and a pair of jeans can't fix.

"My parents watch a lot of TV, but when I asked them about the first season, they said, 'It took us a while to figure it out.' I was like, 'What is there to figure out?'" says co-showrunner and writer Paul Simms. 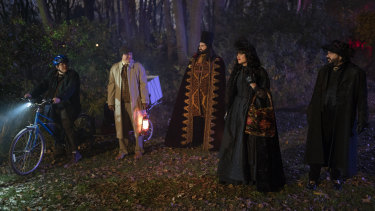 What We Do In The Shadows: Harvey Guillén as Guillermo, Mark Proksch as Colin Robinson, Kayvan Novak as Nandor, Natasia Demetriou as Nadja, Matt Berry as LaszloCredit:Russ Martin/FX

He and fellow writer Stefani Robinson both chuckle from the safety of their respective homes via a Zoom call.

"There's nothing underneath," Simms says, laughing again. "This is about vampires living in the real world and it's silliness and for better or worse, there's no social commentary or homework or anything like that."

Robinson, who is also an executive producer, sums up the show succinctly. "The easiest way that I've been able to describe it is, The Office with vampires. It was a documentary but it wasn't – it's that, but with vampires."

Shadows emanates from the 2014 indie fave feature written and directed by Flight of the Conchords' Jemaine Clement (who developed the television series and serves as co-showrunner) and Taika Waititi. Following that film's mockumentary format, the show hangs around with a new set of low-key vampires hilariously embodied by Matt Berry (the libidinous Laszlo), Natasia Demetriou (Nadja, the most arcane of the three), Kayvan Novak (Nandor, with a hilarious Eastern European accent) and Mark Proksch (as office-worker-type "energy vampire" Colin Robinson, whose very dullness sucks the energy from others). They are cared for by their frustrated human familiar, Guillermo (Harvey Guillen), who wants to be a vampire but may actually be a vampire slayer.

The show is nominated for eight 2020 Emmys, including three writing nods, one each for Robinson and Simms, and a third to their colleagues Sam Johnson and Chris Marcil.

Though Guillermo is on a journey of self-discovery, the vampires, having had their formative periods hundreds of years ago, change at a glacial pace. It's one sitcom set-up after another, but the solutions are unique because the bloodsuckers are super-powered undead and have no regard for human life. Stylistically, Robinson nails it with the Office comparison, but it's also like Seinfeld with vampires.

Simms says: "They've each had more time than any of us will have in our lifetimes to grow, to learn new things, and they've completely squandered all those opportunities. Just sort of sat around."

Regarding Robinson's nominated episode, On the Run, Simms feigns resignation: "Even I'll admit Stefani's was the episode of the season." 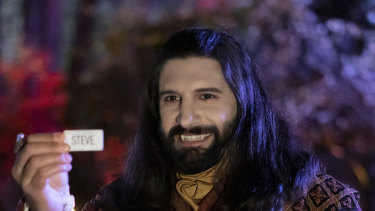 Vampire Nandor (Kayvan Novak) in the spoof What We Do In The Shadows.Credit:Fox Showcase

In it, Laszlo escapes an old enemy (Jim the Vampire – played by Mark Hamill, with an ace Transylvania-ish accent) by fleeing to a small town. From there, it's the familiar story of a mysterious loner who comes to town and becomes a local hero. But he's a vampire. In the episode, Laszlo boasts of being able to escape detection with his foolproof disguise – a toothpick and a pair of blue jeans – and a new identity: Jackie Daytona.

Simms says: "I remember laughing a lot in the writers' room about Jim saying, 'I'll have a normal martini' (mimes tossing it over his shoulder) and (people) not recognising Laszlo. Sticking to the idea that that disguise works was really key."

One of the episode's most memorable moments came from working out Berry and Hamill's fight choreography around a pool table – when Luke Skywalker himself picked up a pool cue and held it like a light saber. "When Mark picked up the pool cue, everybody gasped in the room," Robinson says. "And Matt said something like, 'You've got to be … kidding me,' and started giggling. I've never seen Matt Berry so flustered before."

Simms, meanwhile, is nominated for writing Ghosts, one of several episodes in which the "rules" of supernatural creatures lead to comedic situations – in this case, since the vampires were once humans who died, their spirits should be wandering around.

He says: "My favourite part was Nandor having forgotten his own language so he can't communicate with his ghost, then them being united in their affection for the horse. Then Nandor being a little sad that his ghost self is reunited with the ghost horse – it was a sad moment without being maudlin."

"Can I tell you when I think you nailed the episode? It was all the 'Updog' stuff," Robinson says of a long-gestating joke in which Colin keeps trying to trick people into saying, "What's up, dog?" The silly gag still amuses her (she confesses Austin Powers formed her sensibilities from a "too young" age), laughing as she remembers "Colin summoning his grandmother's ghost just for an 'Updog' joke".

"There are details in Paul's scripts," she says, "you can tell someone very smart wrote it, someone who's well read and aware of their surroundings and is educated, but is also stupid and funny and silly. It feels like this person is observant, has a real point of view about what's going on in the world and within themselves. It's a hard thing to pull off, I think."

Simms smiles: "Yeah. I like some stupid, silly stuff."

Robinson says, "A Paul joke that made it into On the Run that I love was the 'mechanical Turk' joke. It's about the singing (Big Mouth) Billy Bass; it's something so specific that only a very small group of people would understand what this is and why it's funny, but at the same time … "

Simms completes the thought: " … it's talking about a singing Billy Bass." And both laugh.

For his part, Simms names a surprisingly emotional scene between Nandor and Guillermo as his favorite moment of the season – "That and the first time I read Stefani's outline and it said, 'toothpick and a pair of blue jeans'."

What We Do In The Shadows is on Fox Showcase, Thursday, 8.30pm.