If Kris Jenner or Kourtney Kardashian ever need to be in two places at the same time, it’s good to know they now have options. The Kar-Jenner Momager and her oldest daughter are the latest two members of the famous fam to be turned into wax works of art! That’s right, dolls — the Keeping Up With The Kardashian stars will officially have their own wax figures on display at Madame Tussauds in New York City along with Kim Kardashian West, Khloé Kardashian, Kendall Jenner, and Kylie Jenner. And you really need to see the photos of Kris Jenner and Kourtney Kardashian’s new wax figures because they are accurate AF.

As any good KUWTK fan knows, Kourt’s wanted her own wax figure for quite some time since, until now, she was the only one of her sisters not to have one. I mean, Kim has three, you guys! Three — including one where she’s taking a selfie while standing next to Kanye. So yeah, I think Kourt’s version was pretty overdue. And Kris’ reaction to seeing her daughter’s likeness for the very first time is actually so adorable!

Mama Bear hit up her Instagram feed on May 9 to share a three-picture slideshow of the figures, plus a clip of the big unveiling on her Insta Story.

Here’s the slideshow. Be sure to swipe through because the last pic is all kinds of awesome:

How amazing is this!? Our new wax figures at @nycwax #madametussaudsnewyork, opening Tuesday! Me, Kourtney, Kim, Kylie, Khloé and Kendall will all have our wax figures together for the first time. #DoubleTrouble #MadameTussauds @kourtneykardash @coreygamble

"How amazing is this!?" Kris wrote in the caption. "Our new wax figures at #madametussaudsnewyork, opening Tuesday! Kourtney, Kim, Kylie, Khloé and Kendall will all have our wax figures together for the first time. #DoubleTrouble #MadameTussauds."

They really are so dope. Like, I would wait in an hours-long line to take pictures with these babies. You know, probably.

But let’s take a closer look at that last pic — which Madame Tussauds New York reposted — because TBH, it took me a minute to figure out which one was the real Kris and which was the wax Kris, and I totally blame that on Corey Gamble’s sneaky pose so well done, sir!

Now, let’s check out at that sweet video I told you about. Because Kris is total #MomGoals as she freaks out not over her own likeness, but over Kourtney’s.

"Kourtney, we look so real!" she exclaims in the video on her Insta story. "I actually thought you were gonna start talking."

#PressPlay #KourtneyKardashian and #KrisJenner’s wax figures at #MadameTussauds in #NYC are spot on ??? #Socialites, what do you think? ?? (Swipe Left) – #wellbadent 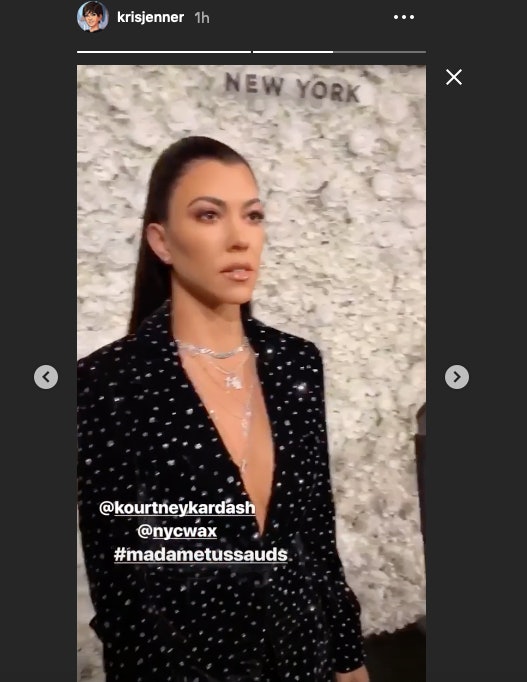 So freaking real. Sorry, Kim. But I think Kourtney is now officially the most interesting to look at.

Anyway, I think it’s pretty safe to say that these two wax figures are so realistic that they’re on a whole new level. Which means Kim is probs gonna be mad shook and demand that they make her a fourth one.

For the record, I’d be totally fine with that — as long as we get one of Queen North in full meltdown mode, too.

I called Jada and was unable to get booked at the Red Table due to scheduling conflicts, so I guess I’ll have to address this here. I want to start off by apologizing to the many, many, many people that look up to me: I’m sorry Penelope, Reign, Mason, Dream, True, Stormi, Chi, Saint, and Larsa. I have gone to great lengths to work on myself, yet I let a pair of boots trigger me. I am a work in progress, God’s not done with me yet. I hope you all understand. My personal progress was challenged when Mommy saw how good I looked in her boots and she decided to ban me from wearing them. My first instinct was to blame her for my embarrassment, but she can’t help that she is driven by jealousy and envy. Blaming her, would be blaming the victim. It’s just disappointing she feels the need publicly shame me because her sunglasses aren’t selling (I’m assuming). In the future, I hope that we can resolve our conflicts not on social media, but in private or on an episode of KUWTK like a normal family.