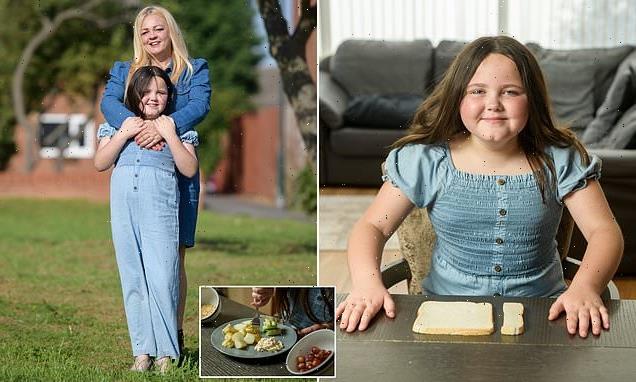 A life without meat, dairy or nuts: Mother reveals how her daughter, eight, can only eat FOUR GRAMS of protein a day due to rare genetic disorder that severely restricts her diet

A mother has revealed how her eight-year-old daughter can only eat fruit and veg because having too much protein in her diet could leave her with irreversible brain damage.

Lilly-Ann Woolliss, from Immingham in Lincolnshire, was born with phenylketonuria (PKU), a rare genetic disorder that severely limits how much protein the she can eat in a day.

PKU is a recessive condition in which the body cannot break down an amino acid found in protein that is known as phenylalanine.

Speaking about her daughter’s condition, Carmen Wilkie, 43, explained: ‘She’s amazing, she just cracks on. She does have the odd day where she feels down and says “PKU sucks mum, why did it have to happen to me?” But she knows what she has to do and accepts it.’ 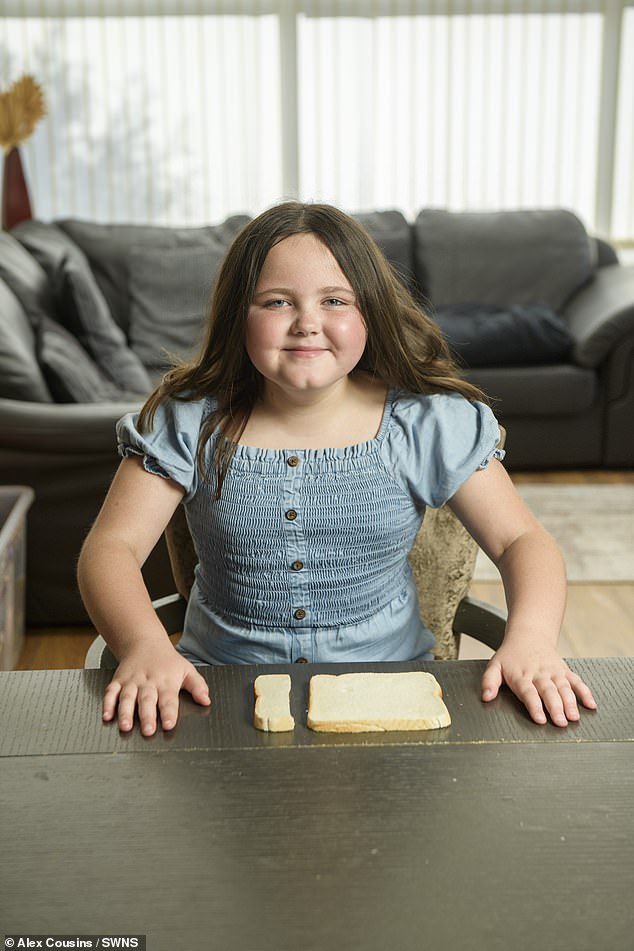 Lilly-Ann Woolliss, 8, from Lincolnshire, has phenylketonuria (PKU), which means that she can only eat 4g of protein every day 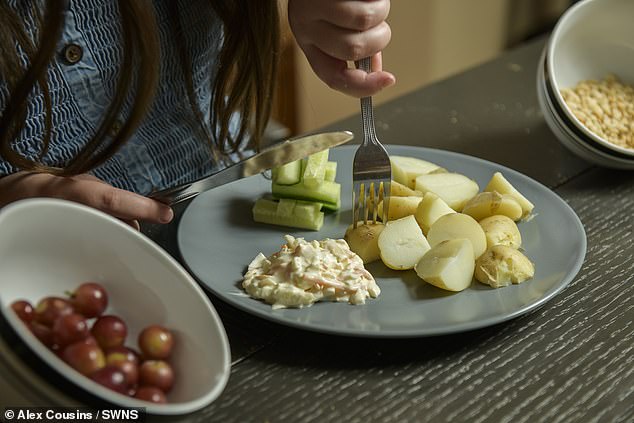 The youngster’s diet has to be specially prepared, with her mother Caren cooking every meal from scratch and making meals for Lilly-Ann to take to school

The eight-year-old has to avoid foods with aspartame, a sweetener often found in fizzy drinks.

Lilly-Ann must take daily supplements to get all the nutrients she needs to make her grow and keep her alive.

But her diet consists mainly of fruit and veg and she has to have specially prescribed milk and bread from the NHS.

She rarely eats out at restaurants or goes to friends’ houses for tea. 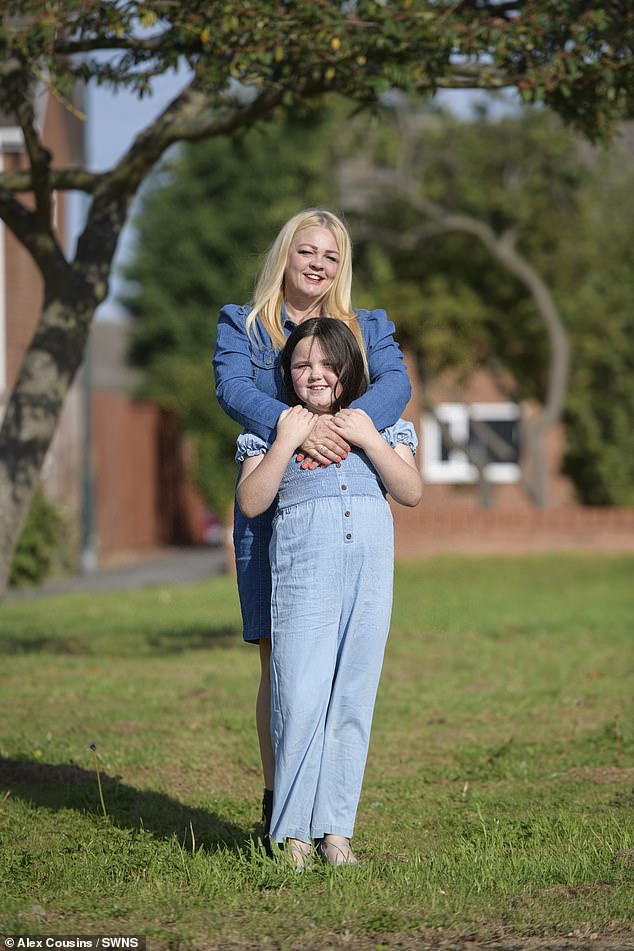 According to Lilly-Ann’s mother Caren Wilkie (pictured), her daughter rarely eats out at restaurants or goes to friends’ houses for tea

Caren, who quit work as a hairdresser to care for Lilly-Ann, must cook every meal from scratch and take her specially-prepared food into school for her.

Caren said: ‘I’m always weighing food, organising prescriptions, monitoring what she’s eating. All her meals have to be cooked from scratch.

‘She can’t go to the shop like we can and grab a sandwich or a bottle of pop.

‘Picnics are out of the question and only one of our friends will have her round for tea because it’s so hard to prepare her meals. 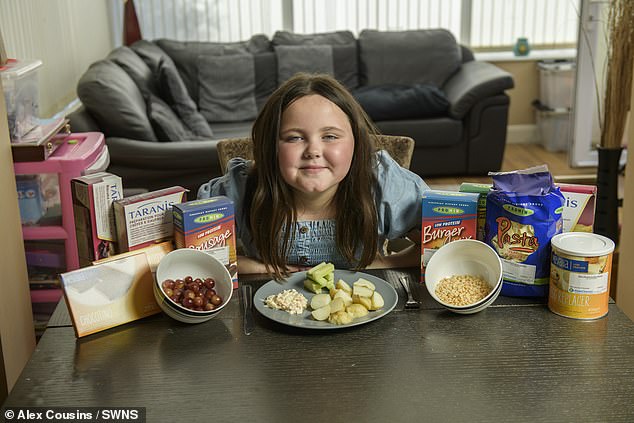 Lilly-Ann can only eat a small range of foods, to ensure that she doesn’t consume too much protein (pictured) 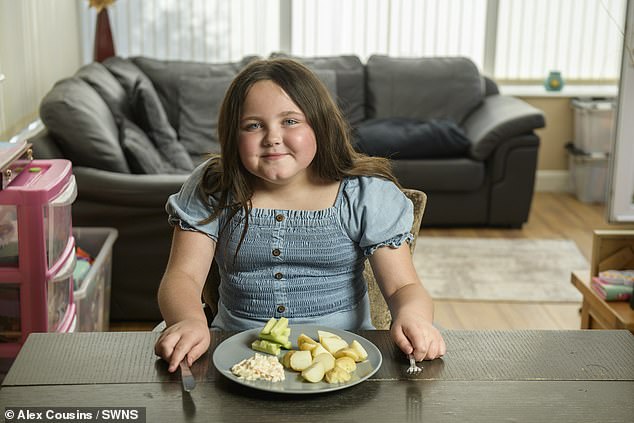 ‘We don’t go out for meals very often, just for birthdays and special occasions and I’ll make sure to take her somewhere with a play area so the focus isn’t on the food.

‘I don’t even show her the menu, there’s no point. I’ll order her a bowl of chips and let her play.’

The body is unable to break down a substance called phenylalanine, which builds up in the blood and brain.

High levels of phenylalanine can damage the brain.

PKU is treated with a special low-protein diet, which reduces the levels of phenylalanine in the body and prevents brain damage.

The condition doesn’t usually cause any symptoms if treatment is started early.

If PKU isn’t treated, damage to the brain and nervous system can lead to learning difficulties, behavioural difficulties and epilepsy.

Symptoms of untreated PKU include:

The chances of catching the rare metabolic disease are believed to be around one in a million because it is a combination of defective genes from both parents.

Caren must carefully measure out everything Lilly-Ann eats and take her blood tests every week.

Levels of phenylalanine must be between 120 and 360 micromoles per litre of blood for her to stay healthy.

Caren limits Lilly-Ann to four grams of protein to maintain it at around 200 micromoles per litre.

Even a slight increase to five grams of protein can cause Lilly-Ann’s pupils to become wide and see her become ‘drunk like’.

Caren added: ‘To catch PKU, she inherited a mutated gene from me and from her dad. If she’d only inherited one defective enzyme, she would not have had it.

‘If her levels of phenylalanine get too high over more than three weeks, it can cause irreversible brain damage.

‘When I’ve given her an extra few peas on her plate it can make such a difference. It’s like she’s drunk, it’s just not worth it.’

To keep her levels in check, Lilly-Ann eats fruit for breakfast and occasionally a tiny 15g serving of rice krispies which contains a gram of protein.

She eats mash potatoes with white cabbage for her lunch almost every day and will eat chips or new potatoes for her dinner.

The schoolgirl must also take her supplements – a mixture of 30g of powder and 100ml of water – four times a day.

Caren added: ‘The supplements she takes keep her alive, but they bring their own issues.

‘People have noted that she doesn’t look starving, but they are full of calories.

‘They also stink so we put them in a baby’s bottle.

‘But then when we’re out, people will look at her funny and that’s hard.

‘Sometimes I will drain beans and give her some bean juice so her food has a bit more flavour.’

The youngster was diagnosed with condition, which affects around 1 in 10,000 babies, during the heel prick test when she was just five days old and put on a special diet.

There is no cure on the NHS for phenylketonuria so Lilly-Ann will have to deal with her illness for the rest of her life.

Brave Lilly-Ann was named the ‘unsung hero of the year’ by local radio station Lincs FM at a glitzy ceremony. 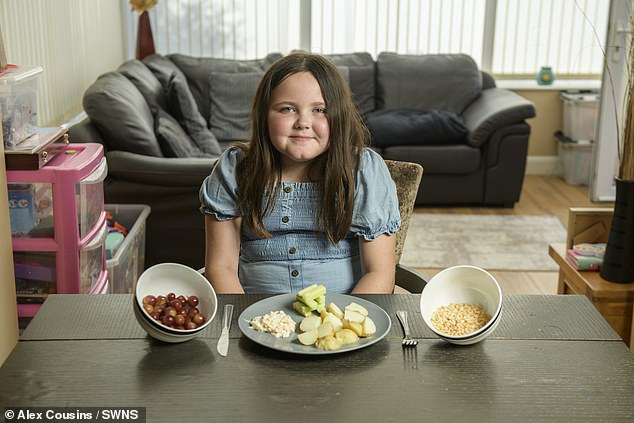 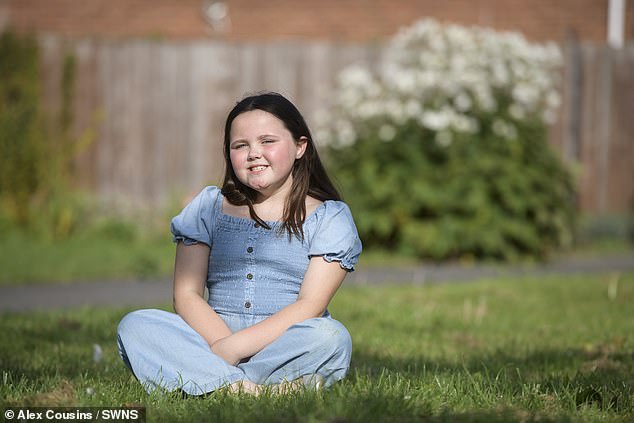 Caren added: ‘When she’s older, she’ll have to be very careful and plan her pregnancy well because high levels of phenylalanine can damage unborn babies in PKU sufferers.

‘Also when she gets a common cold, her body will naturally make its own protein to fight the bug and that is dangerous too.

‘My dream is to take her to Disney World Resort in Florida because they actually have a PKU menu.

‘That would be amazing to take her somewhere and let her order from a menu while having fun.

‘Just a little thing we all take for granted, but it’s something she’s never been able to do.’ 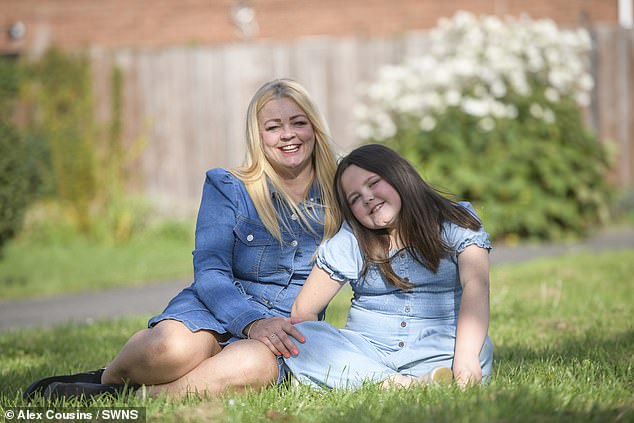 The supplements Lilly-Ann has to take to control her illness are high in calories, and also have an unpleasant smell