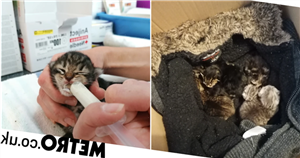 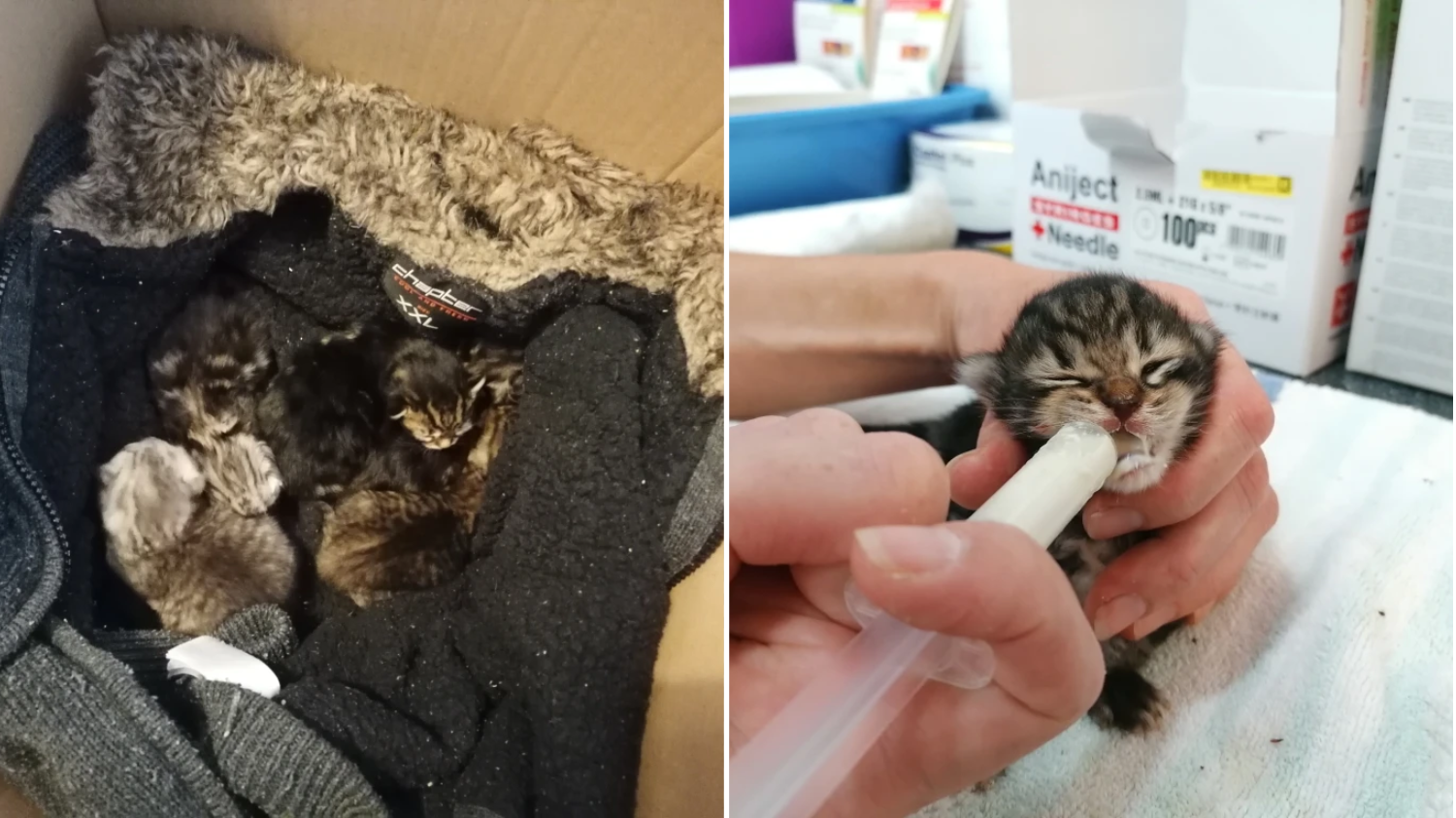 A box of five nine-day-old kittens was found dumped on the drive of a Surrey RSPCA rescue centre, with nothing but a fleece and a note.

The note was taped to the top of the cardboard box the poor flea-bitten cats were left in that read: ‘Please help them! They were born on 24/08. God bless you.’

They were found on the morning of September 2, and staff think they can’t have been away from their mother for long.

The babies will now have to be carefully and painstakingly hand-reared by staff, and will remain extremely vulnerable for some time after having been taken from their mum so young.

Millbrook Animal Centre deputy manager Liz Wood said: ‘When we found the kittens we brought them into the centre to check them over. They’d clearly just been taken from their mum as their tummies were full of milk.

‘They are covered in fleas and are clearly very vulnerable being away from their mum at such a young age, so we’ll be keeping a close eye on them and doing our best to hand-rear them all which isn’t an easy task, especially at a time when the centre is full of animals who all need our attention.’

This comes just a week after a mother cat and her kittens were left abandoned on the driveway of another rescue centre in Coventry by a mystery owner.

There’s been an increase in demand for space in rescue centres, with figures released by the charity showing that the number of animals given up rose by 17% from 2020 to 2021, and by a further 24% in the first part of 2022.

Liz said: ‘Unfortunately we see lots of kittens coming into our care because they were unplanned litters and their owners simply can’t take care of them.

‘We would urge cat owners to get their pets neutered to avoid situations like this.

‘We’d also plead with people who are struggling to ask for help; don’t be embarrassed or ashamed. These are difficult times and there are lots of resources out there to help anyone who is struggling.

‘It is never acceptable to abandon pets like this – especially such vulnerable babies – and although we understand why someone would leave animals with us, we’re stretched to the limits right now and just don’t have the space to take animals in if they’re left on our doorstep.’

The RSPCA Animal Kindness Index found that 68% of people were concerned that the cost of care was increasing, while 19% were worried about how they’ll afford to feed their pets.

For anyone who finds themselves in a position whereby they can no longer afford their pets, the RSPCA has information about ethically giving up your animal.

The answer is never to abandon them in the street.