Universities say a plan to legislate the definition of academic freedom is unnecessary, practically difficult to regulate, and risked conflating the need to protect academic inquiry with broader issues of free speech.

The University of Melbourne was among the institutions to publicly oppose the move, after The Sydney Morning Herald and The Age revealed on Tuesday the Morrison government had struck a deal with One Nation to create a legal definition of academic freedom. 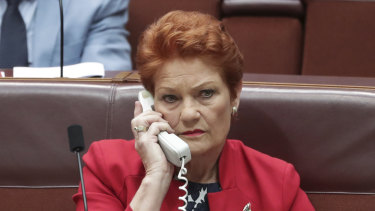 Pauline Hanson is pushing to insert a definition of academic freedom into the Higher Education Support Act.Credit:AFR

Acting Provost Richard James said the university was concerned "with the challenge of appropriately defining the terms academic freedom and freedom of speech" as well as the "practical problems" of regulating compliance.

Western Sydney University vice chancellor Barney Glover said the legal definition was "unnecessary", as the sector was already implementing a model code on freedom of speech and academic freedom.

"For my university, we are satisfied with our policy on freedom of speech on campus and our charter of academic freedom," Professor Glover said. 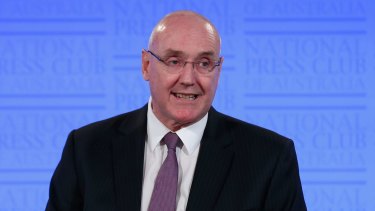 Under the deal, the Morrison government will insert a definition of academic freedom into the Higher Education Support Act, in exchange for One Nation's support for its controversial university funding reforms.

The exact definition has not been made public, but One Nation Senator Pauline Hanson wants it to reflect the definition proposed by High Court Chief Justice Robert French in his government-commissioned review of free speech at Australian universities.

Mr French's definition encompasses a broad freedom for academic staff to teach, discuss and disseminate their research, but extends this to include the freedom to "make lawful public comment on any issue in their personal capacities".

Group of Eight chief executive Vicki Thomson said the French definition was "more about free speech than academic freedom – and the two are different".

"We are also concerned if the discussion on this issue is part of the political horse-trading to secure passage of the job-ready graduate legislation – the two are unrelated and should be treated in that way," Ms Thomson said.

Andrew Norton, a higher education professor at the Australian National University, said there was a case for clarifying the definition in law, but there should be no "special protections" for academics "freelancing on issues in which they've got no expertise".

He said it was not clear what legal effect legislating the definition would have.

"My understanding is it would not create a right for individual academics to take action against universities, but it would provide some grounds for the government to intervene if it saw the issue as serious enough," Professor Norton said.

The government's job-ready graduate legislation proposes a major restructuring of university funding by hiking fees for some courses, including by 113 per cent for humanities, in order to pay for cuts to STEM, nursing and teaching courses.

Modelling by the Centre for the Study of Higher Education at Melbourne University, released on Tuesday, compared the estimated funding of universities in 2023 under the current policy settings against the impact of the reforms in 2023.

However, other universities' revenue would increase, including the University of Western Australia which would would receive $12.4 million a year more.

Researcher Mark Warburton said the University of the Sunshine Coast stood to lose more revenue than any other university, as much as $31 million a year or 12 per cent of its estimated 2023 student place revenue.

"It is far from clear that the reforms will produce the benefits for our economy or rural and regional higher eduction provision the government is claiming," Mr Warburton said.

University of the Sunshine Coast vice chancellor Helen Bartlett has been a strong supporter of the reforms, saying they would "have a positive impact in the regions through funding for more places and regional research".

The most important news, analysis and insights delivered to your inbox at the start and end of each day. Sign up to The Sydney Morning Herald’s newsletter here and The Age’s newsletter here.