The chief executive of Victoria's regional train service has been immediately suspended amid an investigation by the Independent Broad-based Anti-corruption Commission (IBAC).

Public Transport Minister Ben Carroll said he had directed the V-Line board to suspend James Pinder after being was made aware of the IBAC investigation on Wednesday night. 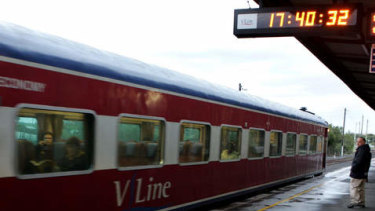 V-Line CEO James Pinder has been suspended amid an IBAC investigation.Credit:Leanne Pickett

"Nick Foa, currently the head of transport services at the Department of Transport, will act as V-Line CEO while a longer term arrangement is put in place," Mr Caroll said in a statement.

"This is an ongoing investigation, it would be inappropriate to comment further."

Regional train services would not be affected, Mr Carroll said.

Mr Pinder was appointed as chief executive of V/Line in late 2016. Prior to that he also worked for three years as general manager rolling stock at Metro Trains Melbourne, according to his LinkedIN profile.