Ikea’s famous Swedish meatballs are getting a meatless makeover! The furniture chain recently announced that it plans to debut a vegetarian-friendly version of its popular dish allowing those who aren’t carnivores the opportunity to enjoy the beloved food.

According to a press release from the European company on Thursday, May 2, it is working on the development of a new meatball that “looks and tastes like meat but is made from plant-based alternative proteins.” The release notes that this upcoming food item is slated to be available in all Ikea restaurants across the globe in early 2020. 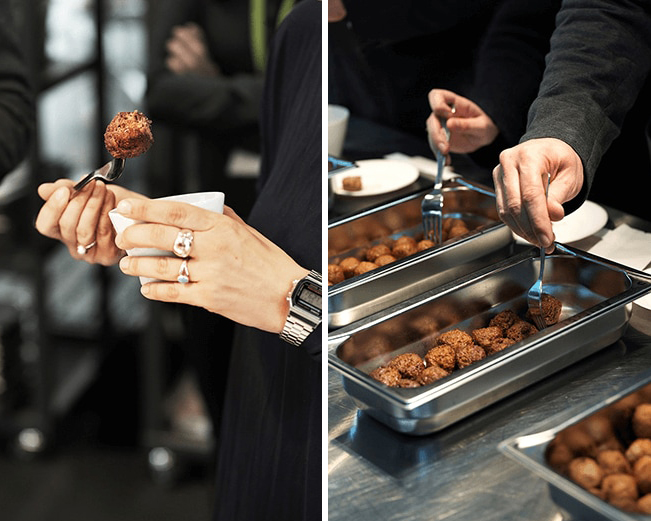 To create a meatball that is not only vegetarian but also tasty, Ikea is collaborating with some of the leading suppliers within the plant-based food industry and conducting its own taste tests. “Looking at the quality of the products that we have been tasting I am looking forward to serving a delicious plant-based meatball made from alternative protein at Ikea,” said Michael La Cour, managing director at Ikea Food Services AB. “I hope that the many meatball lovers out there will like it as well.”

The Netherlands-based brand has been dishing out its Swedish meatballs for 35 years, and the new alternative protein version will be the fifth member of the growing meatball family. In 2015, the chain added both veggie and chicken balls to the menu, and in 2018 the salmon and cod ball was introduced. It’s not clear how the newest addition will differ from the already existing veggie variety.

“We see a growing demand from our customers to have access to more sustainable food options and we want to meet that need,” La Cour explained. “Our ambition is to make healthier and more sustainable eating easy, desirable and affordable, without compromising on taste and texture.”

Ikea is the latest company to hop on the plant-based food wagon. Burger King recently announced plans to roll out its vegetarian Impossible Whopper nationwide after successful tests in certain locations, and White Castle has been serving Impossible burgers for months.