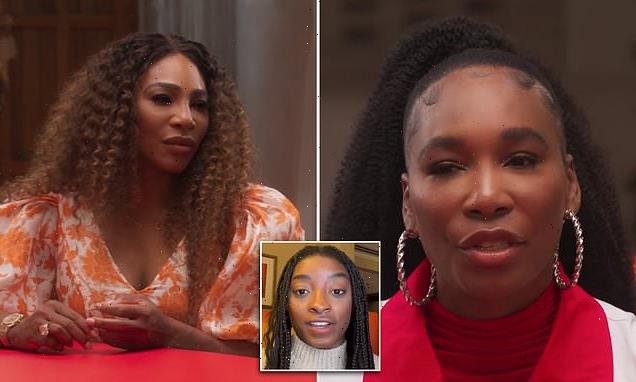 Serena and Venus Williams offer mental health advice to Simone Biles, revealing how they cope with pressure of elite competition – after gymnast’s own struggles saw her drop out of five Olympic finals

Venus and Serena Williams have shared their mental health advice for Simone Biles, who professed to being a ‘big fan’ of the sisters and wanted to know how they ‘keep going, especially when [they] need a mental health break.’

The tennis superstars sat down to chat with Will Smith for a new episode of the Facebook Watch series Red Table Talk ahead of the November 19 release of the film King Richard, in which Will, 53, plays their father.

While discussing host of series subjects including their faith as Jehovah’s Witnesses and the lessons they have learned from one another, the Williams sisters fielded a question in a prerecorded video from fellow superstar athlete Simone Biles.

Simone, 24, gushed about the ‘huge impact’ the Williams sisters have had on her, admitting she wishes they were ‘friends’ and asking for life advice when it comes to taking mental health breaks.

Venus and Serena shared their wisdom, with Serena admitting she simply took a whole year off when she needed one and Venus insisting it’s important not to get ‘too caught up’ in what other people think. 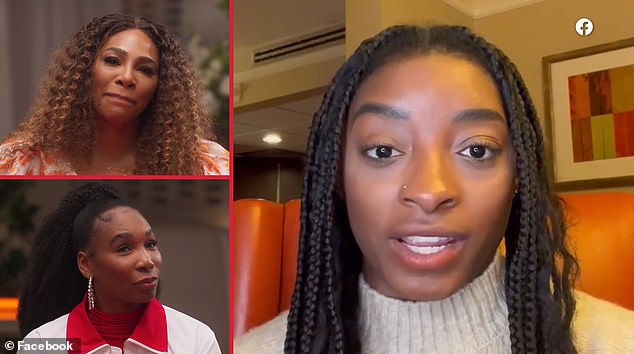 Venus and Serena Williams have shared their mental health advice for Simone Biles, who professed to being a ‘big fan’ of the sisters 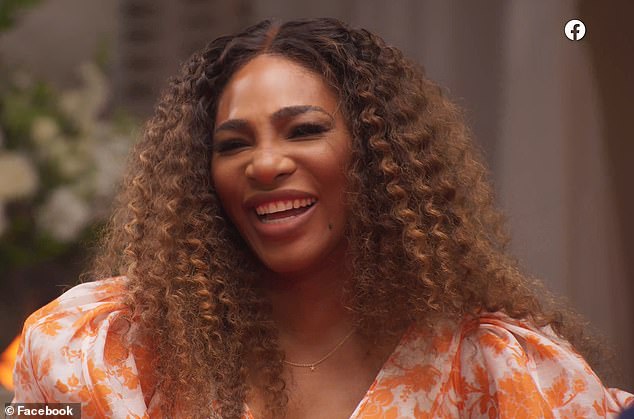 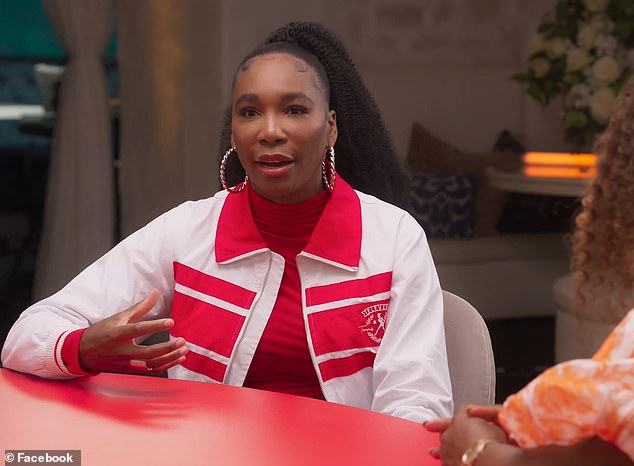 Surprising the sisters on screen, Simone said: ‘The impact that Venus and Serena have made, not only in sports but in life, have made a huge impact on my entire career.

‘They’ve paved the way for black athletes as well black women. I can’t thank them enough. And I’m really grateful that I have them to look up to. I wish we were friends but I’m pretty much just a big fan of them.

‘But I do remember meeting both Venus and Serena at separate times and I was just amazed how tall they were.

‘If I could have any life advice from Venus and Serena, it would be, how do you keep going, especially when you need a mental health break?’

Simone, considered the GOAT of gymnastics by many fans, famously dropped out of several events at the Olympics in Tokyo this year due to a mental health concern called ‘the twisties,’ in which gymnasts — often psyching themselves out — lose track of where they are while twisting in the air, risking serious injury.

She recently broke down in tears on the Today show as she discussed the issue, admitting she is ‘still scared of gymnastics.’

The tennis stars appeared to be flattered by Simone’s message, with Serena saying she’d like to ‘be besties’ and Venus saying: ‘I wanna be friends with her too.

They also shared their advice.

‘Simone, being in gymnastics, that huge moment is once every four years. Our huge moment is four times every year. So for us if we needed a break — I remember one time, in 2006, I just took the whole year off,’ Serena said.

‘For me, when it comes to Grand Slams, sometimes I push maybe too far. I just always keep going,’ she added.

Venus chimed in to say that ‘athletes live very unbalanced lives,’ so she likes to take time out for herself.

‘For me, having a moment alone and be watching something silly, just for like an hour, half an hour, that sort of balances me out. It’s a silly, simple thing, but it helps me get ready for the next day. That’s my prep for the next day,’ she said.

But she also tries to get perspective when she is feeling stressed. 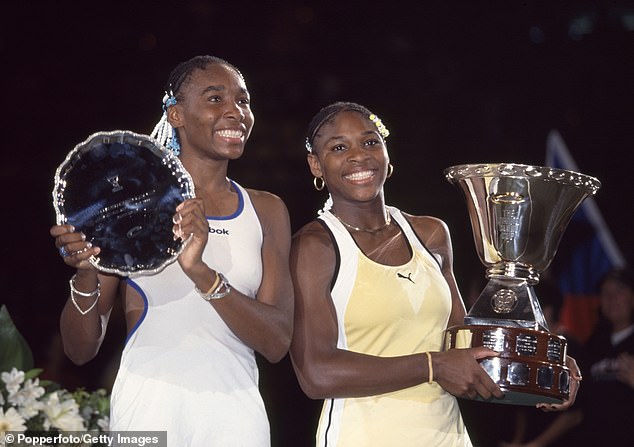 Both get perspective by asking how they’ll feel about a situation in ten years, and said their spirituality has ‘helped us to maintain our mental health’ as well (pictured in 1991) 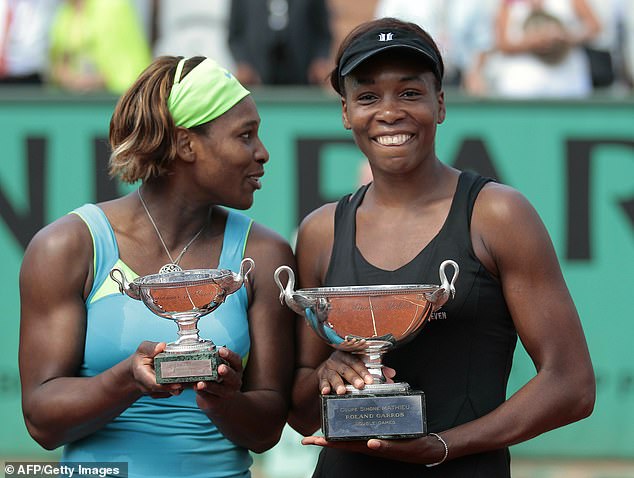 ‘For me, when it comes to Grand Slams, sometimes I push maybe too far. I just always keep going,’ Serena (pictured with Venus in 2010) admitted

The two also discussed not letting failures take up too much headspace.

‘Life is about failures,’ said Venus, who sported a jacket from her lifestyle brand EleVen’s new activewear collection, which was inspired by the film. ‘You just fail, and it’s OK. That acceptance of failure is fine because when you look back in those ten years, even if you fail, if you just gave it your all with what you had that day, that’s still perfect.’

‘I become my best player every time I lose,’ said Serena. ‘I learn from what happened in that loss, and I generally try to really makes leaps and bounds from that loss. And I think sometimes people are afraid to lose if they start winning, or they’re afraid to fail. Like, I know I was in that position. I don’t even like the word — it’s not a failure, you slipped and you’ll get back up.’

Finally, Venus insisted that putting too much stock in what other people think is never good.

‘I think a lot of it too is just taking out whatever the hell other people think. When you let go of that, you are free,’ she said.

‘You always have to check yourself and ask that question: ‘Am I getting too caught up in what Sally and Bobby and Billy think?’ 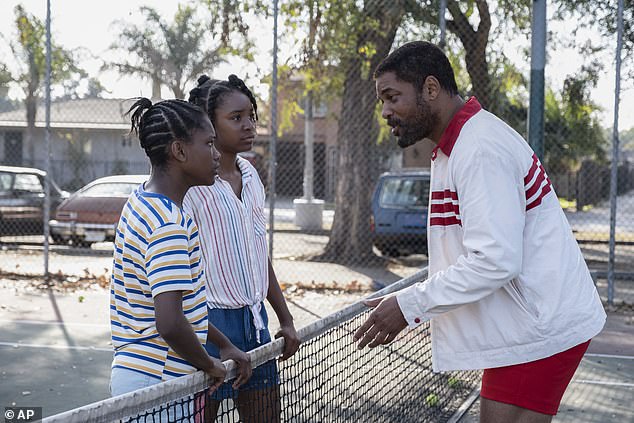 Will Smith stars in the film King Richard, as the Williams sisters’ father 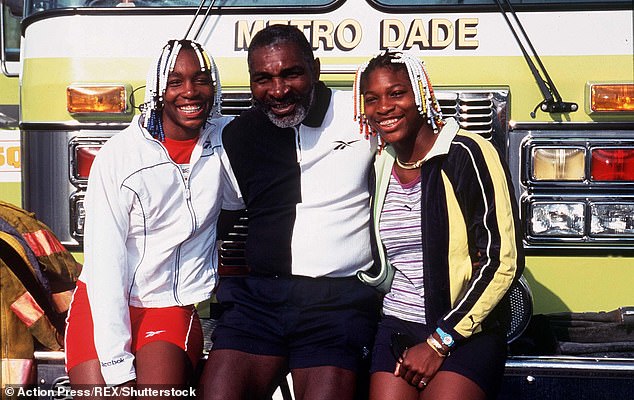 Venus and Serena are pictured with their father, who is the subject of a new movie out this week 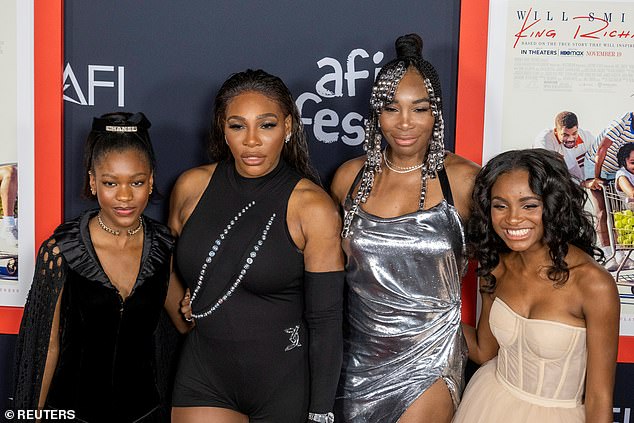 Venus and Serena attend the film’s premiere with Demi Singleton (left) and Saniyya Sidney (right), the actresses who play them

Earlier in the chat, the pair had also talked about the way their faith has helped them through hard times.

‘The first lesson [our dad taught us] was spirituality,’ Venus explained. ‘Put God first. And that gave us the opportunity to actually be better at what we do, because it allowed us to realize, as much as you want it, this is just work and a job, there is so much more, and bigger things in life.

‘That is the foundation and lesson that has literally helped us to maintain our mental health.

‘It really affects in every single decision you make,’ Serena added. ‘How do you treat this person, or how do you even approach a match? And almost it takes a little pressure off of you, because you know nobody wants to win this match more than me.

‘But for us there is something much bigger that we believe in that we know is true. So at the end of the day, as much as that moment means to us, we always have the giant, most biggest pillow to fall back on.’

Serena shared a moment that was particularly hard for her when she relied on prayer. 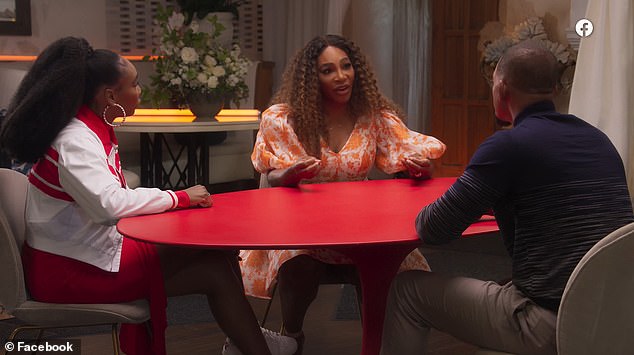 Earlier in the chat, the pair had also talked about the way their faith has helped them through hard times 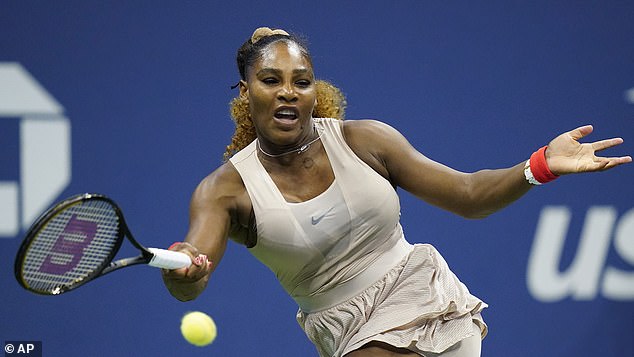 Serena said: ‘At the end of the day, as much as that moment means to us, we always have the giant, most biggest pillow to fall back on’

It was 2001, and Venus, then 20, and Serena, then 19, were set to play against each other in the semifinal at the Masters Series Tournament at Indian Wells. When Venus withdrew due to tendinitis, rumors flew that their father had pulled Venus out to help Serena win.

At the match, the stadium filled with boos.

‘It was hard,’ recalled Serena. ‘And I just remember I was losing and I didn’t even care. I was like, I don’t wanna win, I just wanna get out of this with dignity. And not just walk off the court, and not just start bawling right there at that moment.’

She said she prayed throughout the match, which made a difference.

‘I know that I got strength, and I somehow came back and won that match, and I was able to just get through that moment and it really has helped us in so many different ways in our career,’ she said.

Later, she admitted, she cried about what happened — and it was difficult to go back to Indian Wells, even years later.