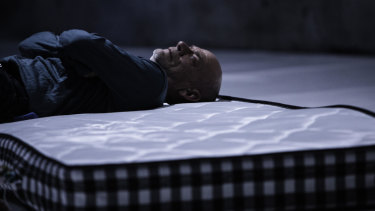 The subjugation of her people, Canadian Cree and Ojibwe tribes, provides the impetus for Lara Kramer’s Windigo.

This process includes cultural genocide carried out in residential schools whose mission was to “stamp out the Indian” in First Nations children.

Kramer is the first of four generations not subject to this desecration, and this work explores her reconnection to her ancestors’ country, including places of family significance.

The show begins with a long scene of silent despair – two men, lying disconsolately on, over and around two bare mattresses, accompanied by sounds like vermin in the eaves, nibbling  away at the modest shelter.

Knives emerge from pockets and the men gradually demolish the mattresses slash by slash. Revoltingly, this includes some of the cover fabric stuffed into a performer’s mouth, and masticated as perhaps the most indigestible food.

The stage is littered with found objects gathered in Kramer’s travels, all damaged and ugly, which performers engage with and discard repeatedly.

Windigo was hard to watch, reminding us most viscerally of much that Indigenous peoples have suffered. But I saw a little of what there is to celebrate, including events like the YIRRAMBOI festival, which offer audiences experiences to learn and share unfamiliar cultures.

The smallest glimmer of future possibilities is offered in a soundtrack, featuring voices of child and mother in lively attuned dialogue of childhood discovery. While this was definitely something, it was perhaps not enough hope or light to leaven the performance.