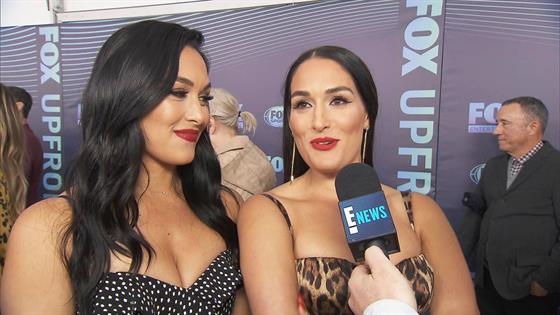 On Monday, Brie Bella was the epitome of this sentiment as she grilled sister Nikki Bella about her love life at the Fox 2019 Upfront. While the 35-year-old Bella Twin tried to stay coy about her “summer lovin'” with Artem Chigvintsev, Daniel Bryan‘s wife made it clear that the twosome act like a couple.

“She keeps saying she has no labels, but they’re together all the time like a boyfriend and girlfriend,” Birdie Danielson‘s mom shared exclusively with E! News.

Apparently, this isn’t the first time that Brie has called out Nikki and Artem. According to John Cena‘s ex, Brie put the casual couple on the “hot seat” while recording The Bellas Podcast.

“She literally asked him, ‘What do you think of Nicole…keeps telling people that you aren’t official?'” Nikki added. “And I was like…looked at her. ‘Cause, I don’t know, I’ve never had that talk with him.”

We can understand Brie’s confusion as Nikki earlier even stated that she and her beau have “a lot of sleepovers.”

“You sleep with the same person, you only post about him, it means you’re official,” Brie confidently noted.

“Wow! You just put my vagina on blast,” Nikki quipped in response. “Thank you.”

Nonetheless, the wrestling maven reiterated that she and Artem are “taking it day-by-day.”

“I think that’s what’s so fun about it,” Nikki relayed. “Every day is something new and fun and, I don’t know, I’m having a lot of fun.”

For Brie and Nikki’s candid conversation about Artem, watch the exclusive interview above!