Australians will be asked if they support an alteration to the Constitution to enshrine an Indigenous Voice to parliament, in a referendum question proposed by Prime Minister Anthony Albanese.

In the most significant speech on Indigenous affairs by a prime minister since Kevin Rudd’s 2008 National Apology, Albanese will also suggest the wording that could be added to the Constitution if the referendum were successful. 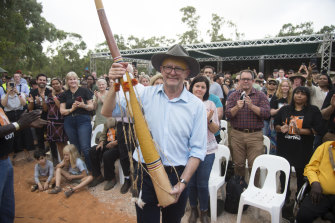 Prime Minister Anthony Albanese displays the yidaki, a digeridoo made by the Yolngu people, that was given to him when he arrived at the Garma festival. Credit:AAP

The prime minister has travelled to the Garma cultural festival in Arnhem Land, which has returned after a two-year hiatus, to call on Australians to unite behind the Labor government’s campaign to recognise First Nation peoples in the constitution.

“I believe there is room in Australian hearts, for the Statement from the Heart,” he will say. “We are seeking a momentous change – but it is also a very simple one.”

Albanese will propose this question be put to all Australians: “Do you support an alteration to the Constitution that establishes an Aboriginal and Torres Strait Islander Voice?”

The speech opens with the prime minister paying his respects in the local Yolngu Matha language of the Indigenous Australians of Arnhem Land.

On arriving at the festival on Friday afternoon, Albanese said Australians should recognise “the oldest civilisation on the planet” by recognising it “in our national birth certificate, the Constitution of Australia”.

While the prime minister will make clear that the final form of words is not yet settled, he will propose three sentences to be added to the constitution if the referendum succeeds: one that enshrines the Voice; one that sets out its responsibility to make representations to the parliament and executive government on matters relating to Aboriginal and Torres Strait Islander people; and one that empowers the parliament to make laws on how the Voice would be created and how it functions.

He does not specify when the referendum will be held but Labor’s plan is to hold the national vote well before the next election, which is due in 2025. 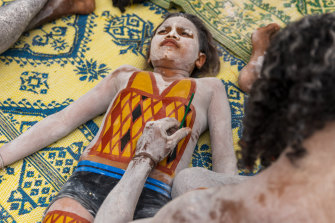 The Garma Festival has not been held since 2019 due to the pandemic. Credit:Getty Images Asia Pacific

Albanese also directly addresses critics of the proposed Voice, including new Country Liberal senator Jacinta Nampijinpa Price and Liberals Tony Pasin, Claire Chandler and Phillip Thompson, who have warned a Voice could divide Australia and demanded more detail about how it would operate.

In his speech, the prime minister criticises “the notion that this is a nice piece of symbolism – but it will have no practical benefit. Or that somehow advocating for a Voice comes at the expense of expanding economic opportunity, or improving community safety, or lifting education standards or helping people get the health care they deserve or find the housing they need”.

“Australia does not have to choose between improving peoples’ lives and amending the constitution. We can do both – and we have to. Because 121 years of Commonwealth governments arrogantly believing they know enough to impose their own solutions on Aboriginal people have brought us to this point. This torment of powerlessness.”

In a rallying cry to all Australians to support constitutional change, the prime minister will argue that “a Voice enshrined in the constitution cannot be silenced”, and cannot be wound back by a change of government.

“It recognises the centuries-old failure Paul Keating spoke of at Redfern, the failure to ask the most basic human question: how would I feel, if this were done to me?”

The Voice to parliament was proposed in the 2017 Uluru Statement from the Heart, which also proposed a Makarrata Commission to oversee treaty-making and truth-telling, and has been endorsed by hundreds of Indigenous leaders. It would provide advice on laws and policies that affect Aboriginal and Torres Strait Islanders. On election night, Albanese committed to enshrining the Voice in the Constitution.

The Coalition government supported the creation of such a body, but was opposed to holding a referendum.

Albanese will argue a constitutionally enshrined Voice will mean “will exist and endure outside of the ups and downs of election cycles and the weakness of short-term politics.”

A report by Indigenous leaders Marcia Langton and Tom Calma for the former government recommended a 24-member national Voice to parliament be created.

Langton on Friday dismissed arguments against the Voice, telling ABC Radio National that while there are now 11 Indigenous members of the federal parliament, “Indigenous peoples around the country will live in electorates where they don’t have an Aboriginal member of parliament”. 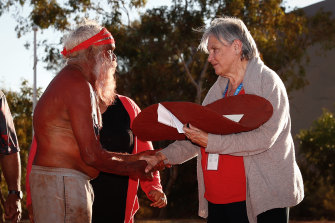 Mutitjulu elder Rolley Mintuma and Pat Anderson from the Referendum Council with a piti holding the Uluru Statement from the Heart in 2017 when the Voice to parliament was first proposed. Credit:Alex Ellinghausen

“They want a formal guarantee that the government will make decisions in conjunction with them over matters that affect their daily lives, such as essential services, potable drinking water, housing, schools, health clinics,” she said.

Just eight of 44 referendums have ever succeeded in Australia and, without a bipartisan consensus in favour of the Voice, the proposal faces an uphill battle.

Shadow minister for Indigenous Australians Julian Leeser has travelled with the prime minister to the Garma festival for the speech and Opposition Leader Peter Dutton has left open the possibility of bipartisan support for a Voice.

Acknowledging the importance of cross-party support, Albanese will point out that the entire parliament endorsed the 1967 referendum on whether the federal government should be able to make laws for Indigenous Australians, and whether they should be counted in the census.

“In the same spirit – I hope that the opposition and the crossbench will support the proposal, join the campaign for a Yes vote and bring their supporters to the cause.”