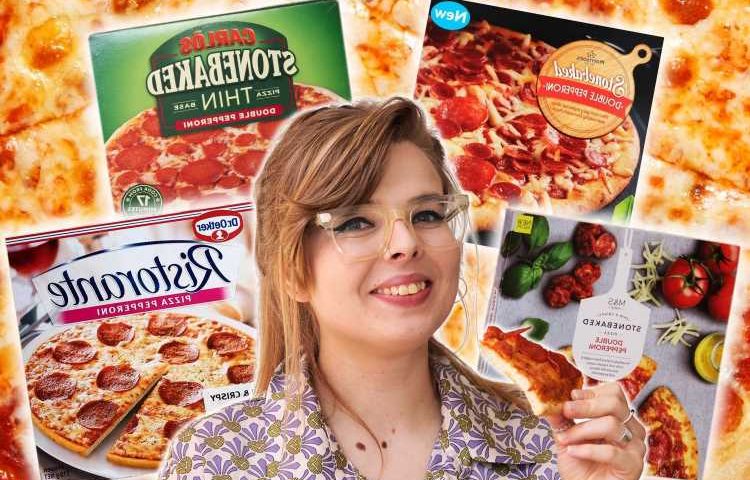 HOT melted cheese, lashings of tomato sauce and a generous helping of toppings…it's easy to see why pizza is one of the nation's favourite dishes.

They were one of the most in-demand freezer staples during the pandemic, according to the British Frozen Food Federation. 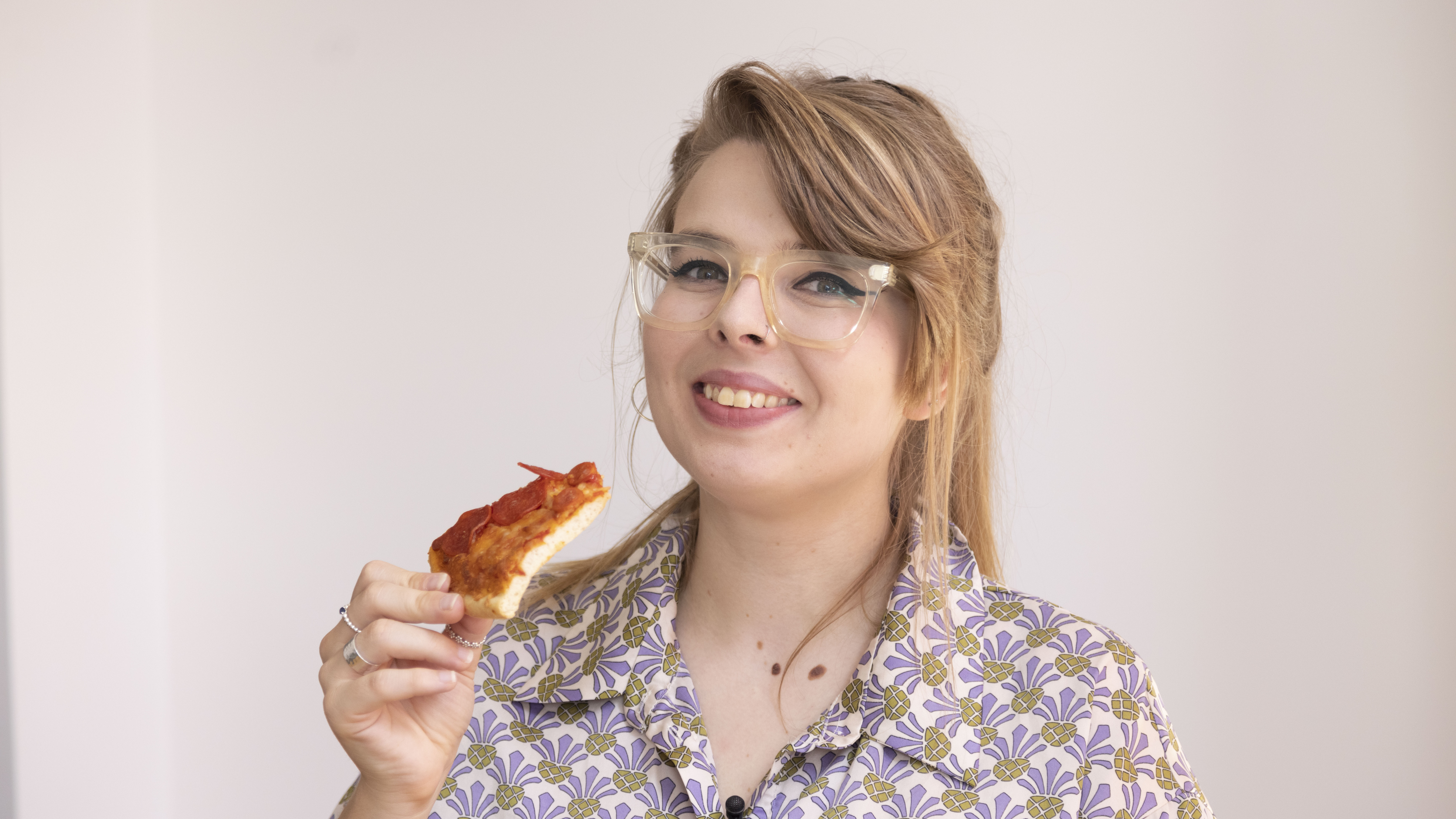 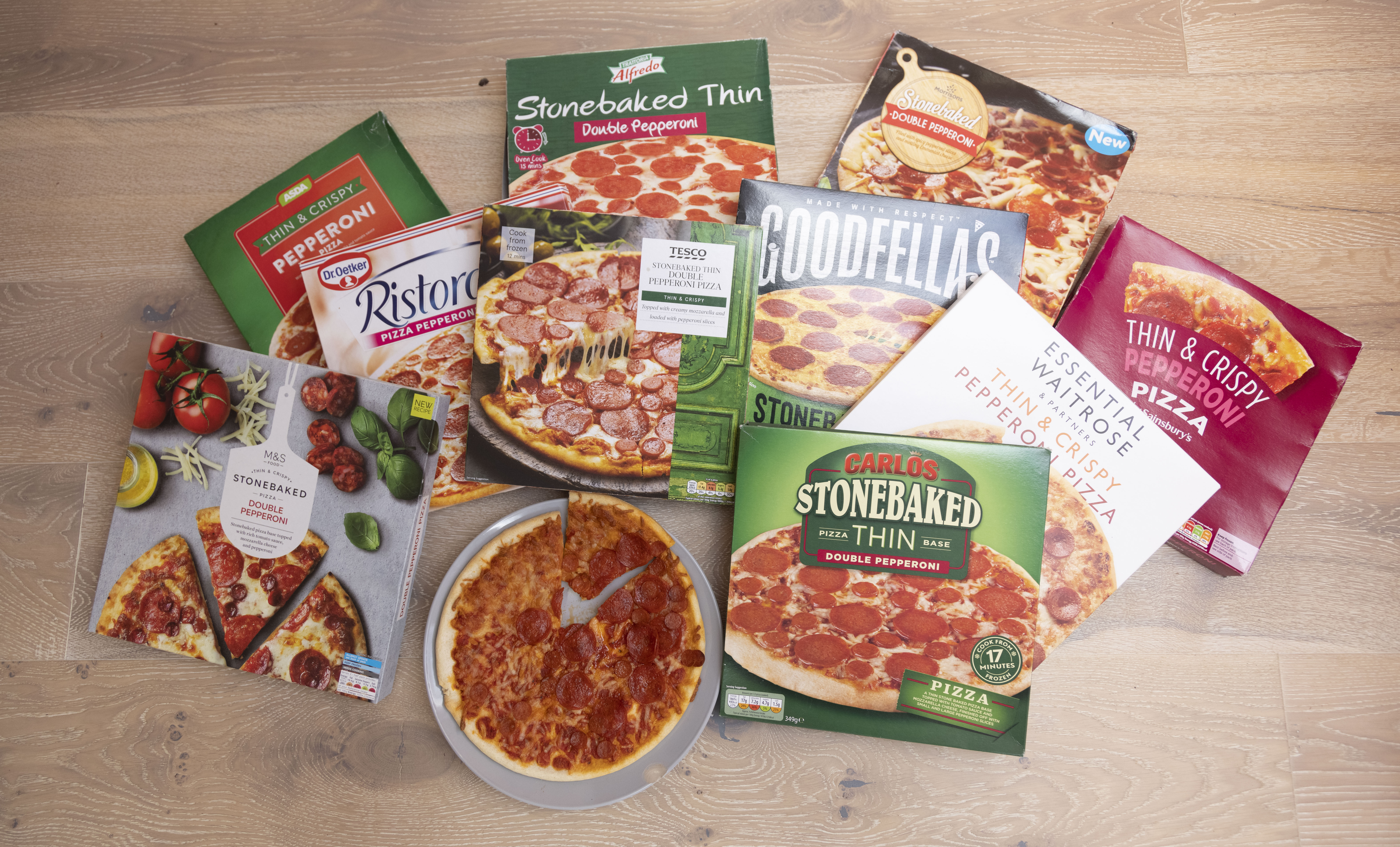 Supermarkets reported selling 9.5% more pizzas in 2020 compared to the year before.

But which one should you be stocking your freezer up with?

The Sun has put eight supermarket and two big brand pizzas head-to-head to see which one is the best.

We rated each pizza out of 10 in categories on appearance, taste, ease of cooking and value for money.

Most of the pizzas we tried were yummy and well worth a try.

But in some cases, the taste didn’t quite justify the price – for example, Dr Oetker’s pepperoni pizza was one of the lowest scorers on taste, but ranked highly on cost.

Aldi beat its rivals and bagged the top spot for the best pizza.

At 99p, we thought it was a bargain – and while it might not have been the most delicious of them all, we ranked it highly for its amazing value for money.

The discount supermarket scored a total of 38 out of 50.

While two of the more pricier options – Dr Oetker and M&S – came bottom of the leaderboard, as we felt the cheaper options tasted just as good or even better.

Below we round up the results of the taste test from best to worst.

Of course, the score for taste and quality is purely based on our opinion and prices could vary depending on where you buy your pizzas from.

A Ristorante spokesperson said: "While we’re naturally disappointed with the outcome, we know that everyone’s pizza tastes are different.

"Ristorante is an Italian inspired thin and crispy pizza range with a focus on delivering a delicious pizzeria taste.

"Popular as a mid-week pizza, we’re a little lighter and totally different to the more loaded style pizzas on the market.

"Ristorante fans love our carefully created pizzas and range of flavours, we know this because they tell us every day." 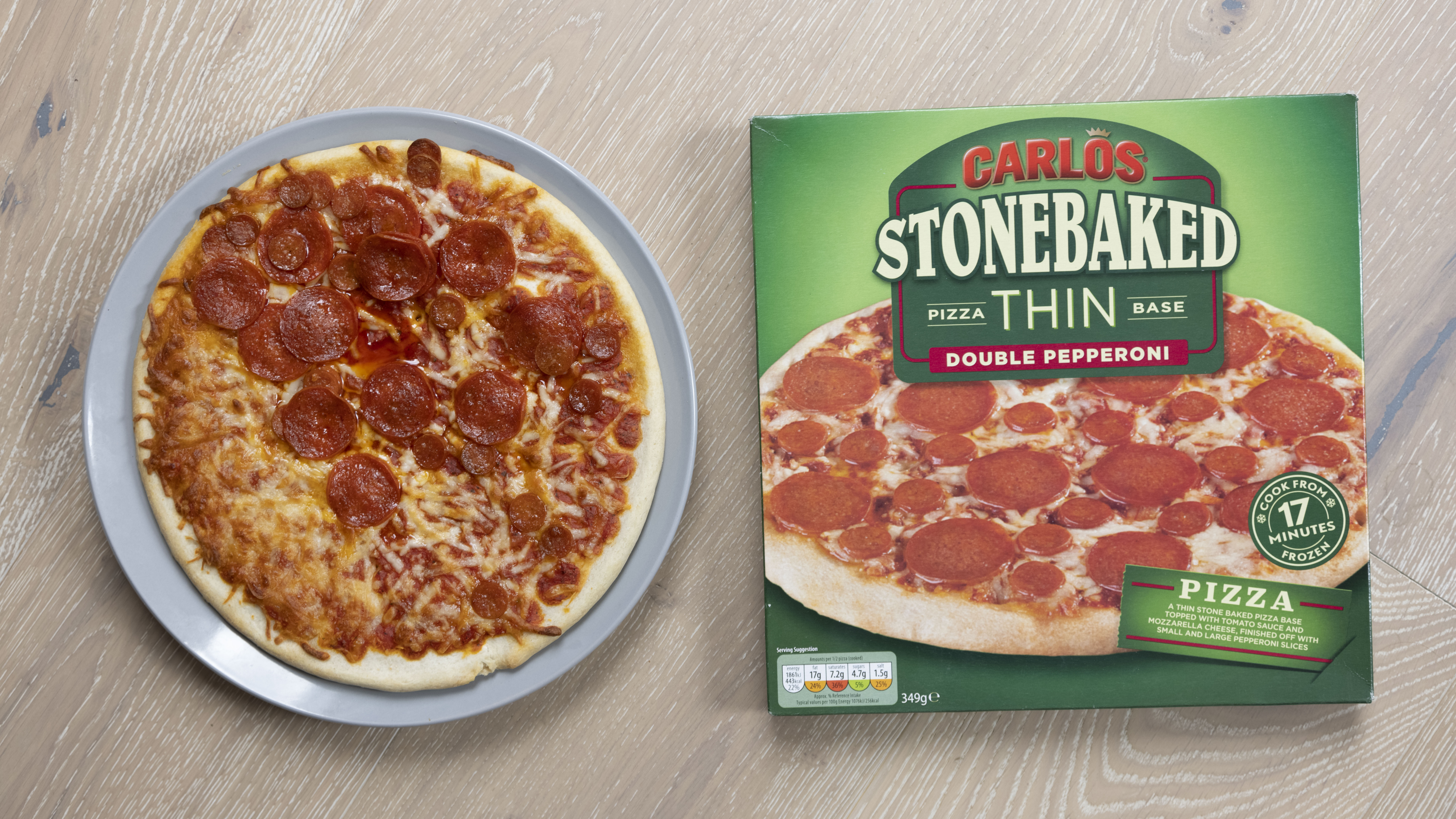 It was one of the meatier pizzas we tasted, with 13 big pieces of pepperoni with lots of small pieces on it too.

There was a good spread of cheese on the pizza as well, and while the tomato sauce was a little on the sweet side, it helped to balance out the salty pepperoni.

It took 16 minutes to cook – a minute less than what the packet said – and would be a great meal to have if you’re in a hurry. 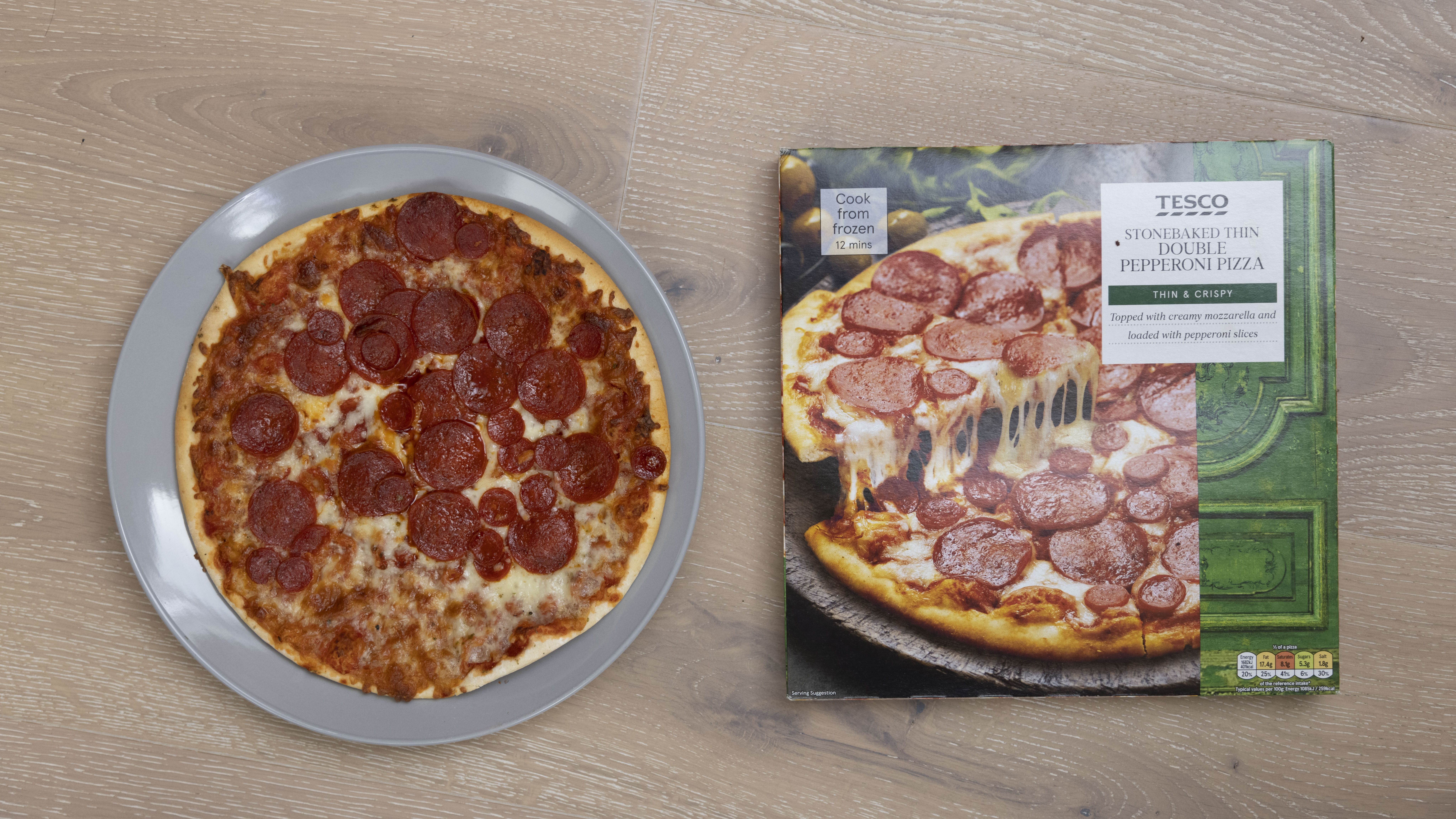 We were impressed with Tesco’s delicious pizza and thought it was great value for money.

It was the meatiest pizza we tasted, with a whopping 17 big pieces of pepperoni on it – which didn’t include the little pieces on it too.

It was also the sauciest, with the tomato sauce oozing out when we took a bite – meaning the pizza wasn’t claggy at all.

However, it took 17 minutes to cook – five minutes than what the packet said.

It was nearer the pricier end of the options on offer which meant it was marked down on cost.

But we still marked it highly for value for money because of the amount of toppings we got on our pizza. 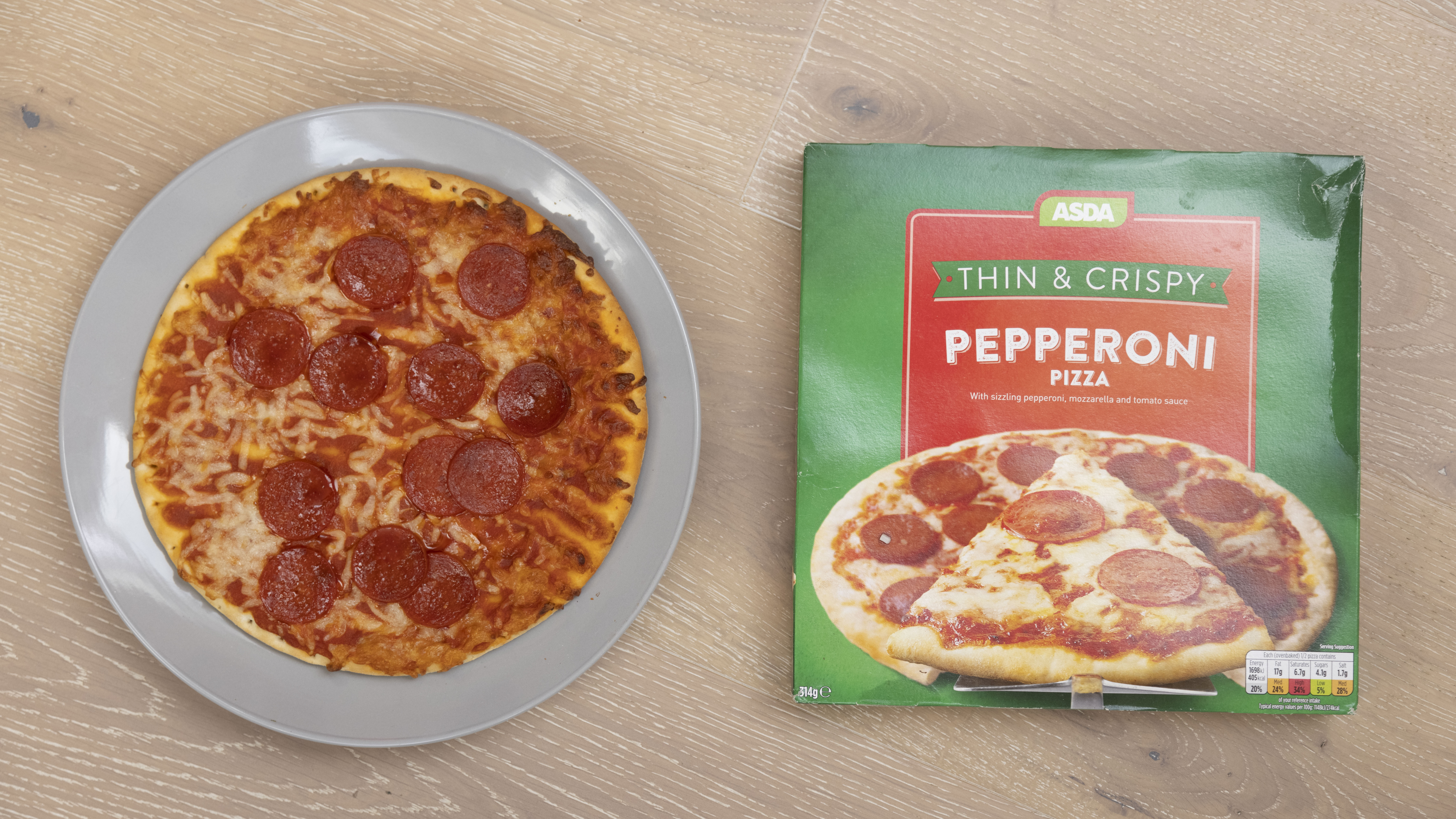 While some of the other contenders were a bit chewy, Asda’s pizza was crisp and springy, with lots of tomato sauce on top.

However, there could have been a bit more crust to make slices easier to hold and eat – and there wasn’t as much pepperoni on it as some of the others.

Initially, we thought the pizza lacked enough cheese, but it stood up in the taste test.

It took 15 minutes to cook – three minutes more than the pack said – but it was still speedier than its rivals.

We scored it high on value for money as it was one of the cheapest pizzas we tasted. 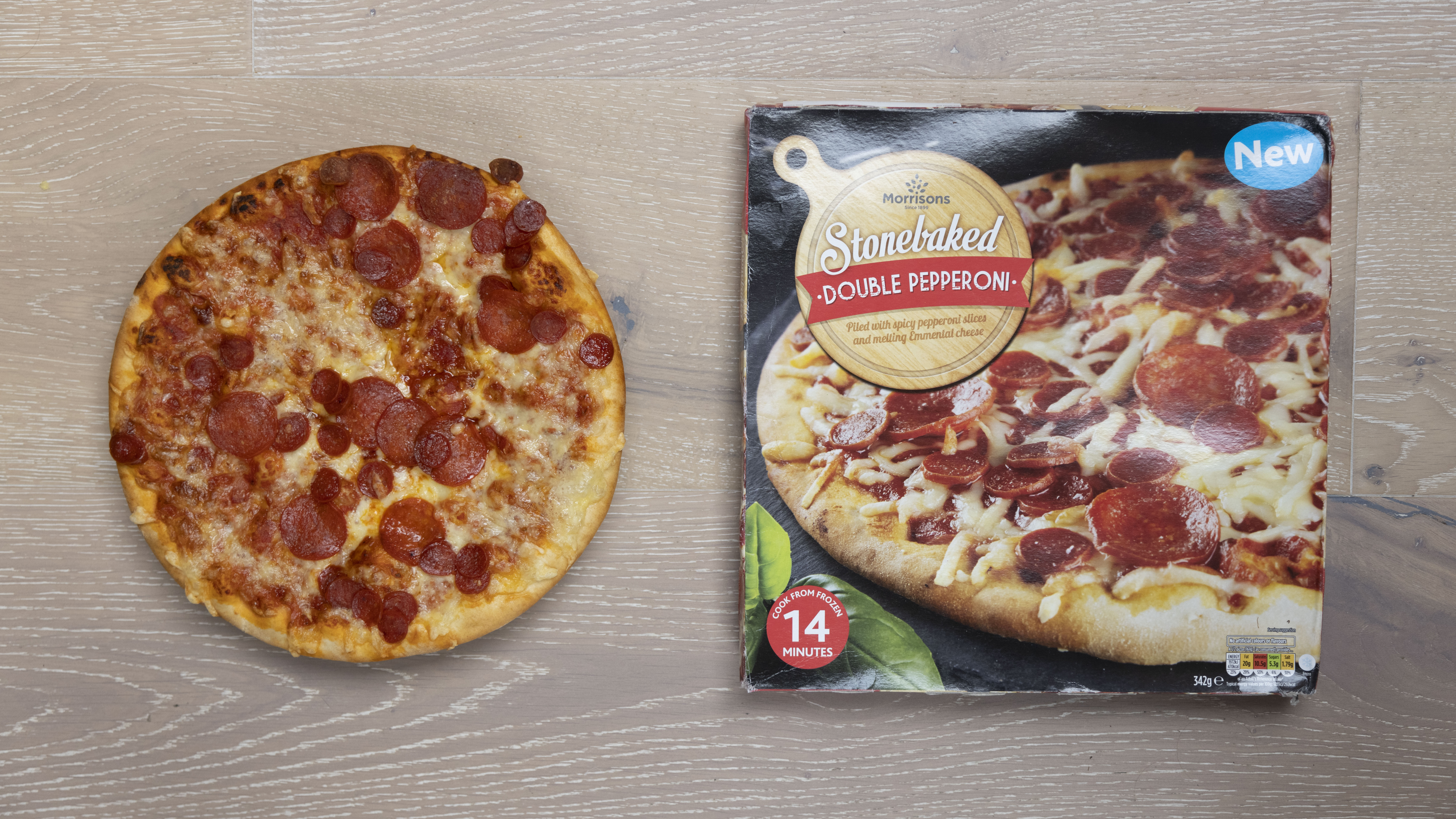 We thought Morrisons was the tastiest pizza of them all and scored it an 8.5 out of 10.

It was one of the cheesiest pizzas we tasted, and the pepperoni was nice and chunky.

However, we found some of the cheaper options were meatier, as Morrisons’ pizza only had 10 big pieces of pepperoni on it.

It was supposed to cook in 14 minutes but needed five minutes more in the oven, making it the slowest pizza to cook.

But we still scored it highly for value for money because it tasted so good. 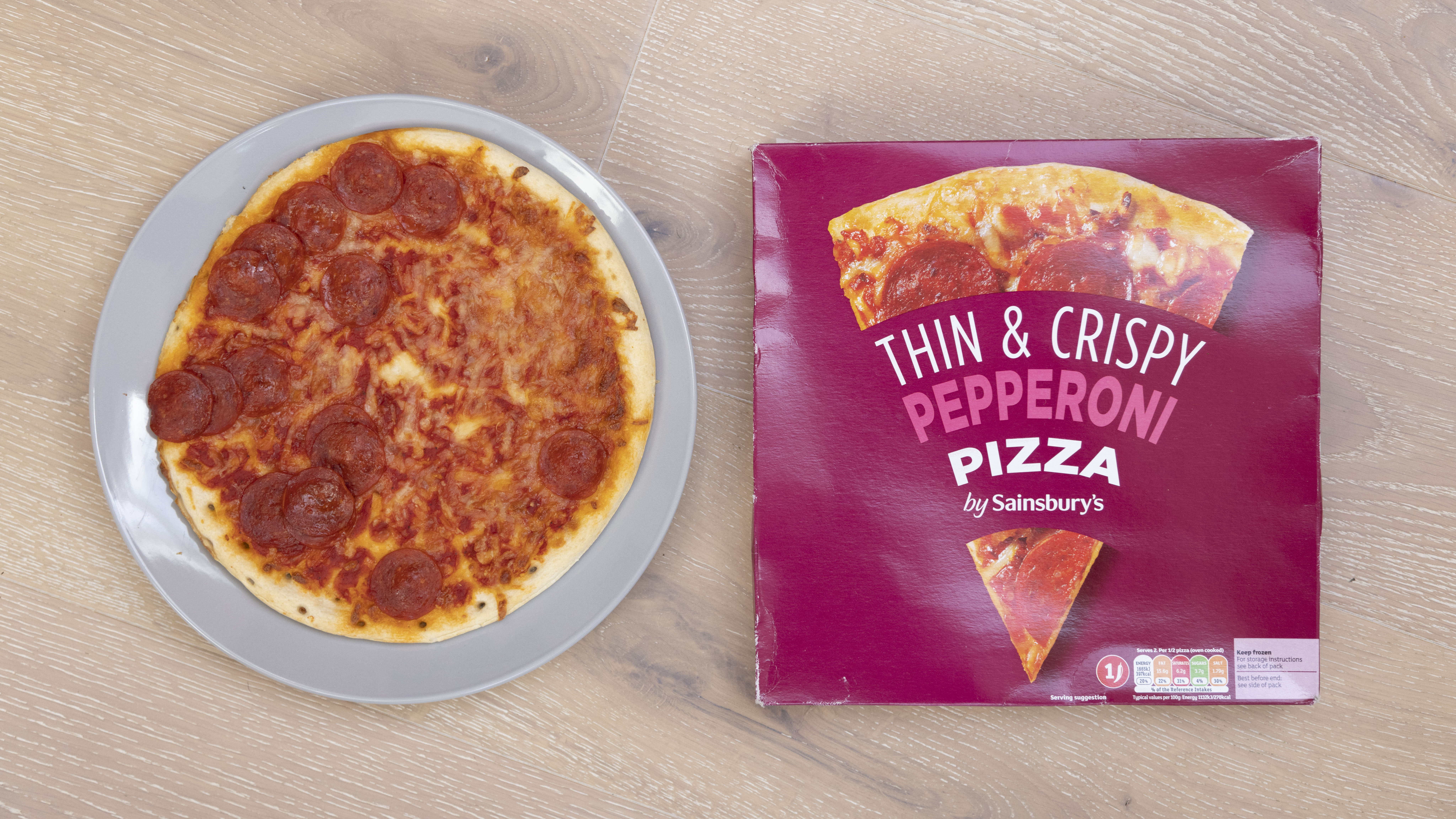 We were impressed with the generous portion of pepperoni on Sainsbury’s pizza – there were 16 big pieces on top.

It had a good covering of cheese too, and was a good sized pizza.

But it didn’t quite hit the mark in the taste test – we scored it a 7.5 out of 10 because it was dry and needed a lot more tomato sauce on it.

It was speedy to cook though, taking just 16 minutes in the oven.

Coupled with its low price, we thought it was still good value for money, scoring it an 8. 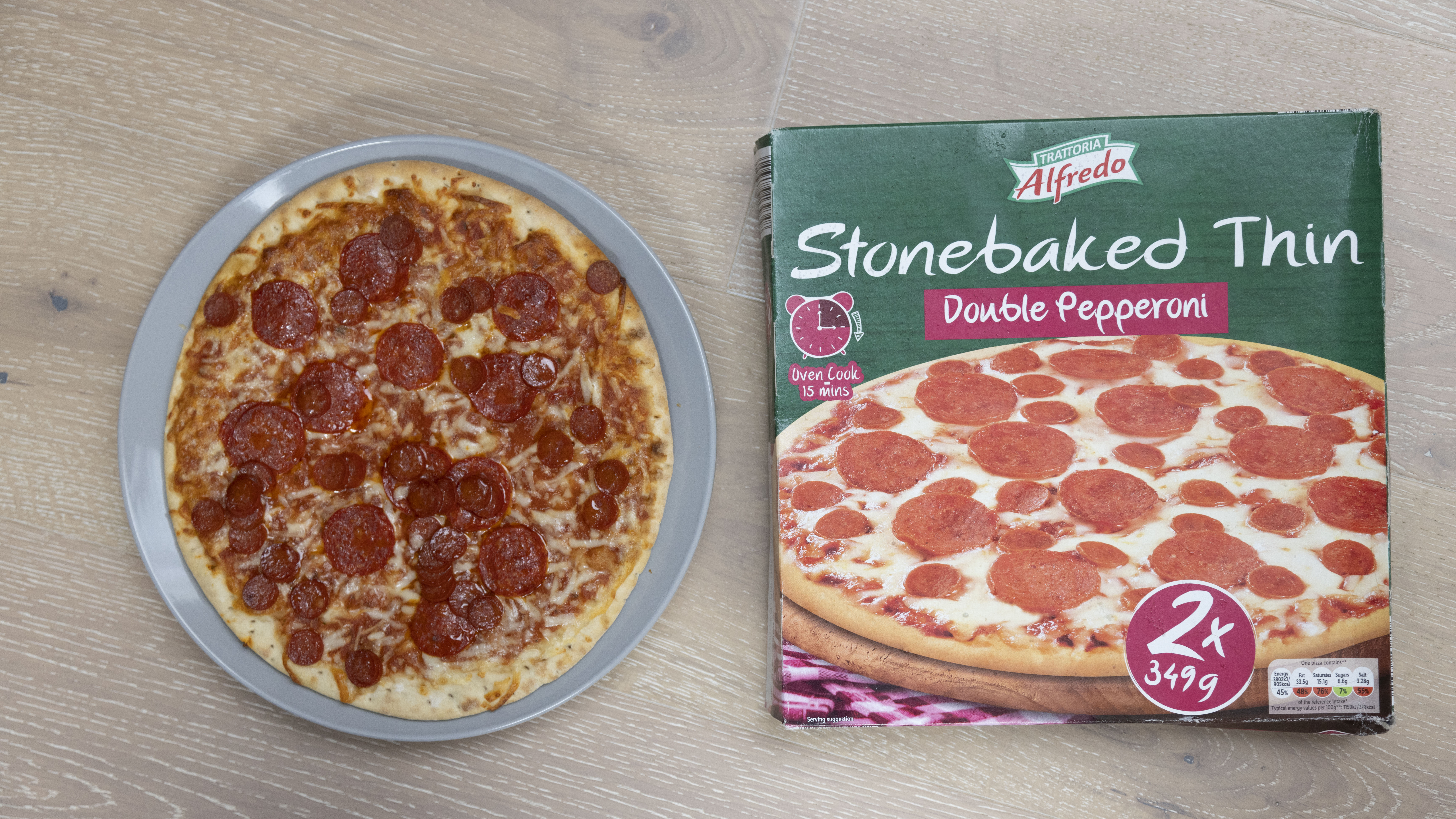 You get two pizzas in a packet from Lidl for £1.98 – making each pizza worth a bargain 99p.

Although each pizza was the same price as Aldi’s, we didn’t think it was as tasty.

The tomato sauce and pepperoni pieces lacked flavour, and we thought the base was a little chewy.

It was also light on cheese, but had lots of pepperoni on it which made up for it.

Although the price was great, we felt it wasn’t as good value for money as some of the other pizzas. 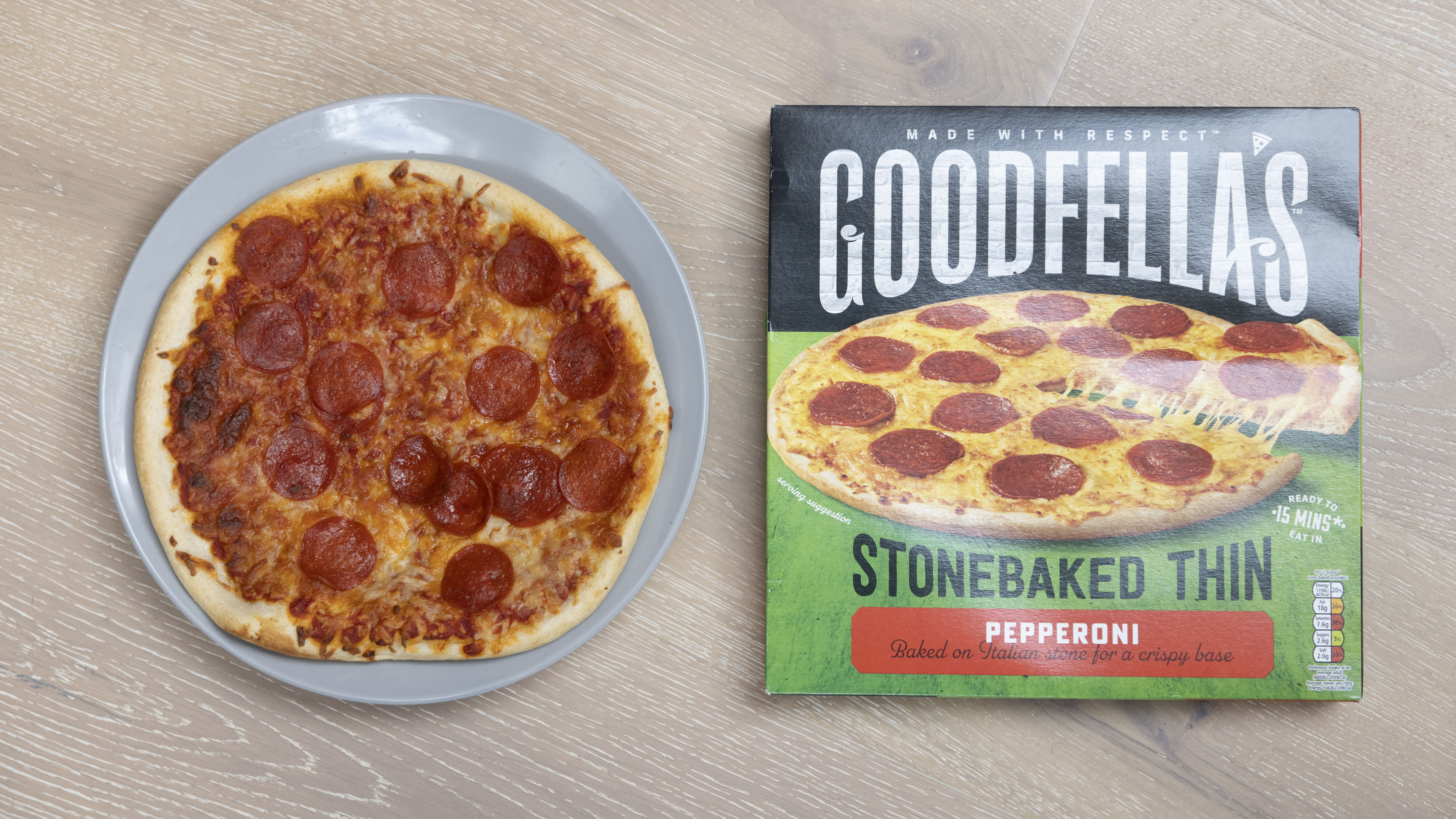 We had high hopes for Goodfella's pizza.

The photograph on the packet looked delicious, and we were expecting the pizza to be loaded with cheese.

At £2, it was one of the most expensive we tried – and while it tasted great, it wasn’t as yummy as Morrisons' pizza which was cheaper.

There was a generous 16 pieces of pepperoni on the pizza, but it wasn’t as cheesy as we thought it was going to be.

It had a nice crispy crust though, and the dough kept fluffy on the inside.

Like Asda, it was the speediest pizza to cook, taking just 15 minutes in the oven. 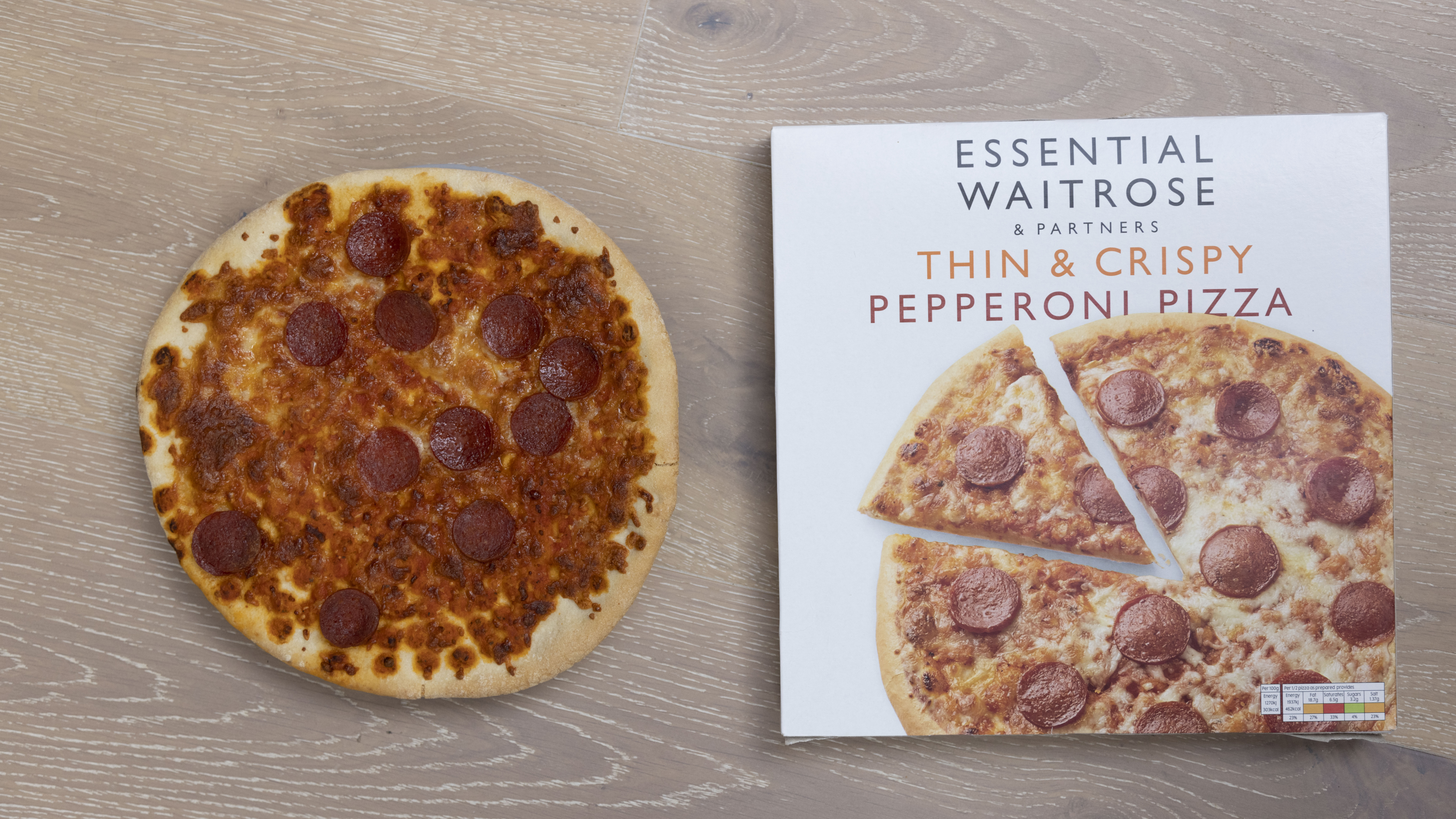 Waitrose’s pizza came out of the oven looking cheesy and crispy.

But it was really chewy and took a while to eat because the base was quite dense.

There wasn’t enough tomato sauce on the pizza either – which made it even claggier.

However, there was lots of cheese and an adequate helping of pepperoni on it.

Although it was cheaper than what we were expecting at £1.40, we thought it didn’t match up to its rivals – so we marked it just 5.5 for value for money. 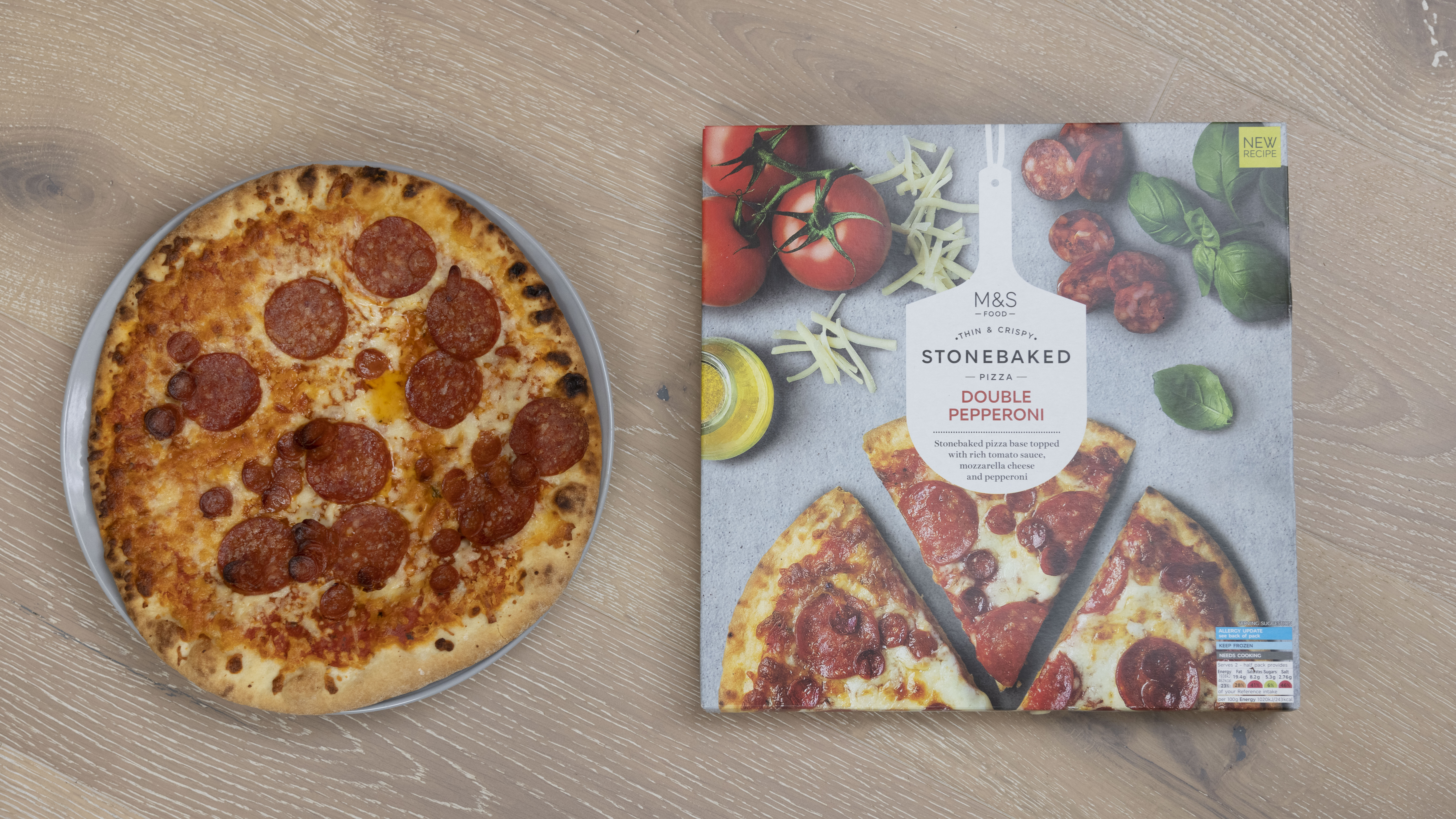 M&S was the priciest pizza we tested at £3, meaning it scored poorly in the cost category.

While we scored it an 8 for taste, it still didn’t match up to Morrisons’ pizza, which was ranked the highest in this category.

Although it was the largest of the pizzas we tasted, it didn’t have as much meat on it, with just 10 big pieces of pepperoni.

It also took one of the longest pizzas to cook at 18 minutes – up to eight minutes more than what the packet said.

Taking this all into account, we knocked it down on value for money, scoring it a 7. 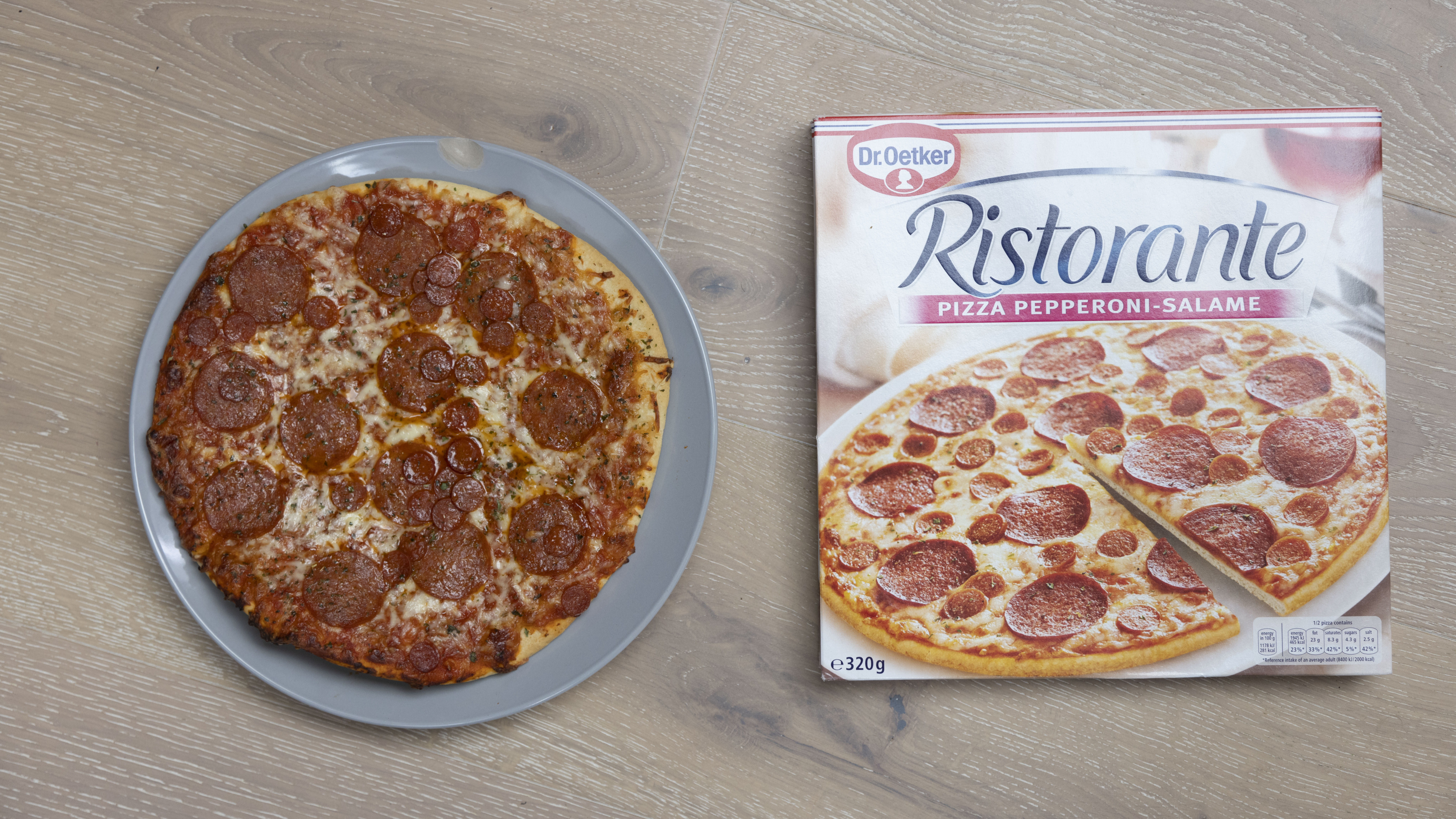 Dr Oetker’s pizza was the second most expensive pizza we tasted.

We thought the smattering of herbs on top was a nice touch, and made us want to tuck in.

But it’s appearance didn’t match up to the taste test – we scored it a 7 because it was too sweet and therefore tasted a little artificial.

There also wasn’t enough crust, meaning that some of the filling spilled over the side and made it more difficult to eat.

As a result, we scored it a 5 for value for money. 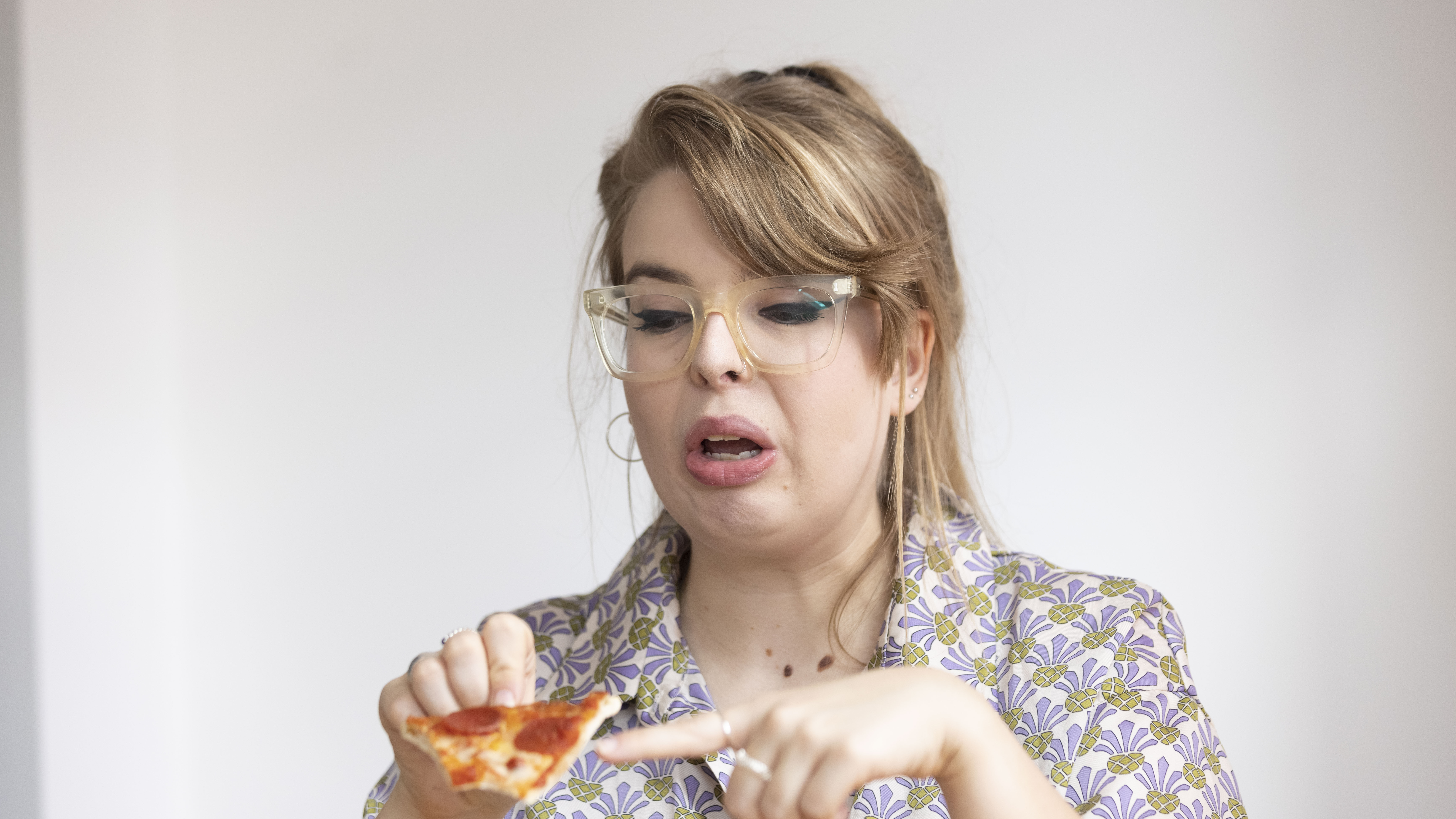 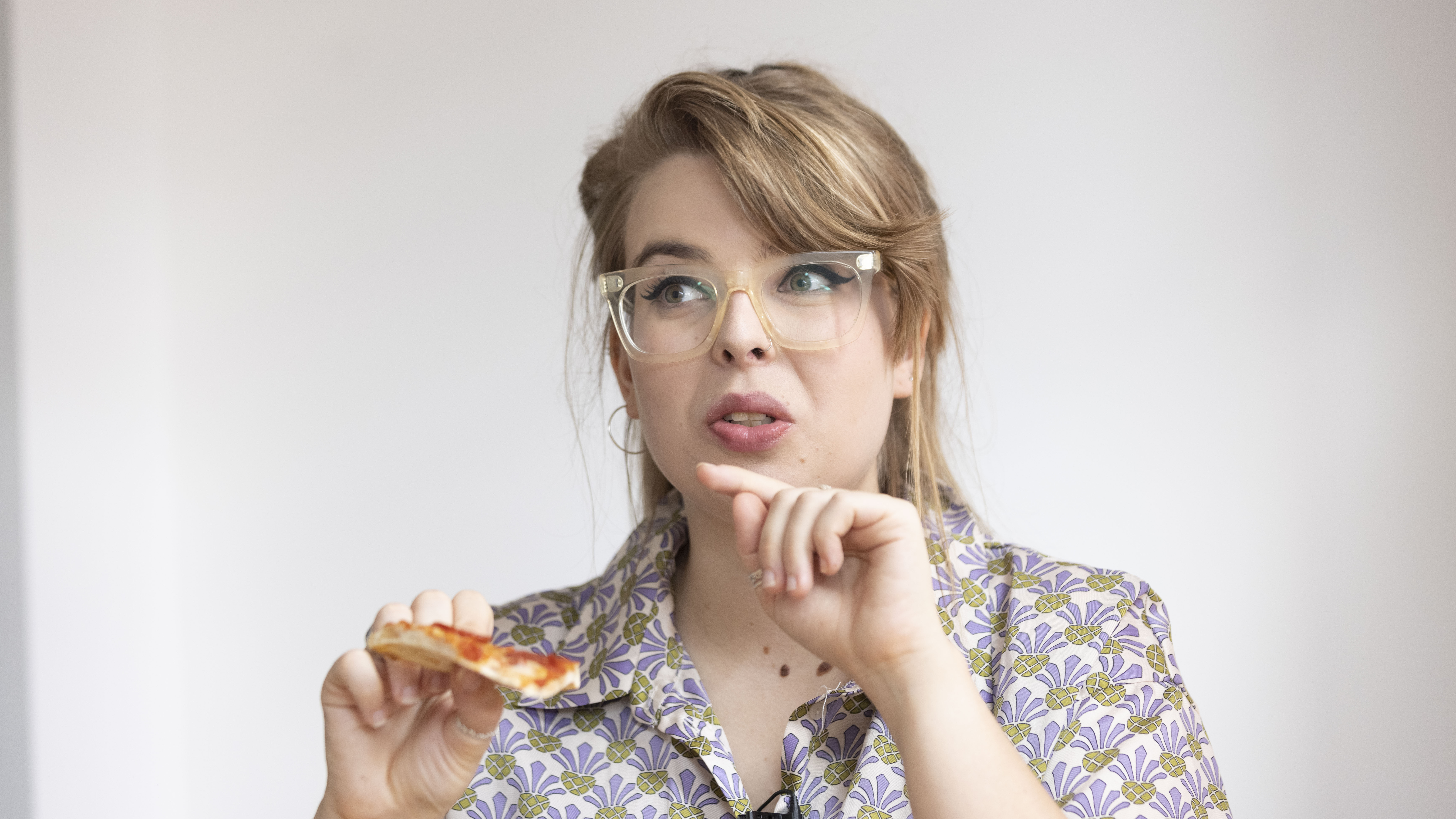 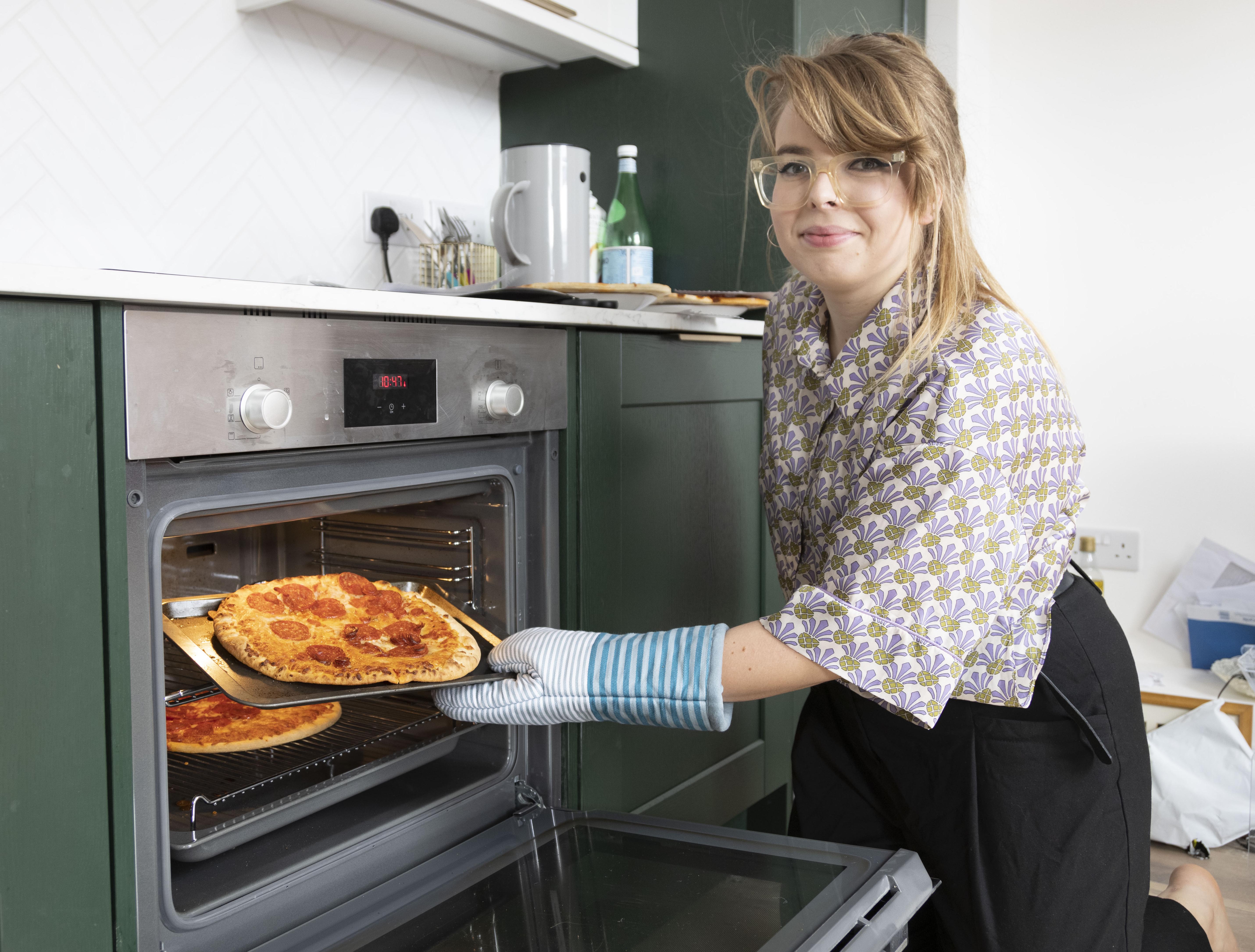 Lidl came top of the leaderboard in The Sun's ice cream taste test.

We've also tested supermarket chicken nuggets including Aldi and M&S to see which ones are best.

The Sun recently also tested oven chips including Aldi, M&S and Aunt Bessies to see which ones are best.