President Trump announced early Friday that he had tested positive for the coronavirus after noticing mild symptoms, and by Friday he was flown to Walter Reed Military Medical Center in Bethesda, Maryland, where he is being treated with an experimental drug cocktail and with remdesivir, for which the Food and Drug Administration has issued an emergency use authorization to treat COVID-19.

Despite reassurances from the White House — and Mr. Trump himself on Twitter — the swift escalation from symptom onset to treatment has left the country on edge.

Dr. Bob Lahita, a professor of medicine at New York Medical College and chairman of medicine at St. Joseph University Hospital, told CBSN on Friday that the precaution is warranted.

“It can turn on a dime, meaning that you can be well and three hours later become dreadfully ill, and that’s a big, big issue,” Lahita said.

The president has received a single 8 gram dose of Regeneron’s monoclonal antibody cocktail, “as a precautionary measure,” according to his physician, Sean P. Conley. The medication is still undergoing a phase 3 clinical trial, with the first data from 275 non-hospitalized patients showing that “it reduced viral load and the time to alleviate symptoms,” the company said in a press release this week.

The president is also being given the antiviral medication remdesivir, a treatment that is not yet recommended for patients with mild COVID-19. Conley, Mr. Trump’s physician, said late Saturday that Mr. Trump had received a second dose of remdesivir “without complication.”

There is currently “insufficient data” to recommend either “for or against the use of remdesivir in patients with mild or moderate COVID-19,” according to the National Institutes of Health’s COVID-19 treatment guidelines.

The NIH has cautioned against its use unless a COVID-19 patient also requires supplemental oxygen — something the White House had initially said the president is not being treated with, although CBS News later confirmed Mr. Trump had received oxygen at the White House on Friday before going to Walter Reed.

“The Panel recommends prioritizing remdesivir for use in hospitalized patients with COVID-19 who require supplemental oxygen but who do not require oxygen delivery through a high-flow device, noninvasive ventilation, invasive mechanical ventilation, or extracorporeal membrane oxygenation (ECMO),” the NIH guidelines read.

According to Dr. Matthew Heinz, a hospital physician who previously worked for the Department of Health and Human Services under the Obama administration, giving oxygen to a COVID-19 positive patient with breathing complaints is common practice. “I wouldn’t be surprised if for example he was on a very low level of oxygen while he was being transferred to the facility, that’s very common for EMS,” Heinz told CBSN after the press conference.

White House chief of staff Mark Meadows said on Fox News late Saturday that Mr. Trump had a fever and “his blood oxygen level had dropped rapidly” on Friday before Mr. Trump went to Walter Reed.

Asked the probability that he will need supplemental oxygen in the coming days, Conley told reporters on Saturday morning that the president will not likely need any moving forward. But Heinz said the likelihood of oxygen with patients is often uncertain.

“I have no idea with my patients that have coronavirus when they come into the hospital if they’re going to do well or they’re going to be on a ventilator the next day, and that’s because it’s so unpredictable,” Heinz said.

According to NIH, preliminary analyses of remdesivir have shown “no observed benefit… in people with COVID-19 who did not require supplemental oxygen.” The agency noted, however, that the trial group “was relatively small,” and the drug is currently being evaluated in another clinical trial for treating patients with “moderate COVID-19.”

According to Conley, the president is having no difficulty breathing, and told the doctors he feels like he could “walk out of here today.” The president’s personal physician would not offer a date for when he thinks the president will leave the hospital. 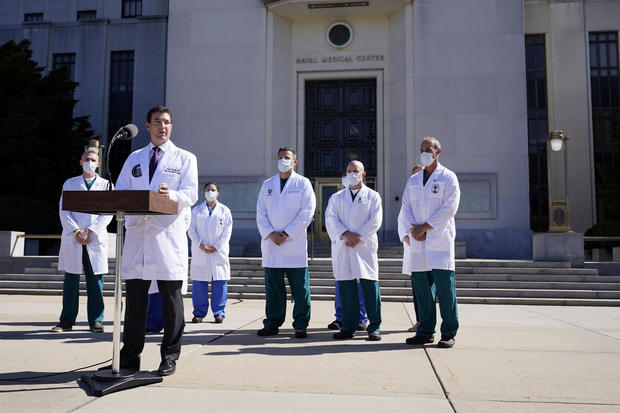 NIH recommends patients not on supplemental oxygen be given remdesivir for “5 days or until hospital discharge, whichever comes first.”

According to Heinz, remdesivir therapy is not typically initiated without diagnostic imaging — like a chest x-ray or a CT scan of the chest — that shows “infiltrates or a pattern of viral infection, viral pneumonia, somewhere in the lungs.” While he said he believes treating the president of the United States with an aggressive treatment plan is warranted, he took issue with the lack of information provided by the White House doctor.

“There have been studies that show remdesivir therapy does actually help folks with more mild symptoms like the president is having, so I think it was a good thing to do,” he said. “But we did not get a report of, for example, a chest x-ray or any specific indication as to his pulmonary function, and I just don’t understand why.”

“Don’t send the doctor out at all if they’re not going to be able to give us a complete clinical picture as to what’s going on. Because by and large it sounded like he was doing well, and he’s improving… so why leave things out?” 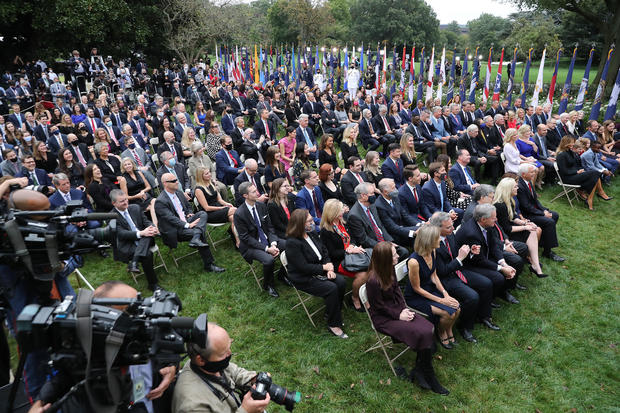 In addition to Regeneron’s antibody cocktail and remdesivir, Conley has also noted that Mr. Trump is taking zinc, vitamin D, famotidine (the medication in Pepcid, for heartburn or acid reflux), melatonin and a daily aspirin. President Trump’s age, weight and gender all place him at higher risk for a more severe coronavirus illness.

Dr. Lahita said the president only has one “comorbidity,” an underlying medical condition that puts someone at increased risk for severe illness, and is likely to respond to treatment. “Presuming he doesn’t have diabetes, hypertension, chronic lung disease, heart disease, he should do very well,” he said.

Lahita said he’s optimistic that the president will fall into the large category of people who recover from COVID-19, but stressed that the unpredictable virus offers few guarantees.

“Most people have no problem handling this virus, and I’m sure the president is going to be absolutely fine,” he said. “However, that is like a Russian roulette. We don’t know who will get very very sick and wind up on a ventilator. We have seen healthy young people wind up in the hospital on a ventilator.”