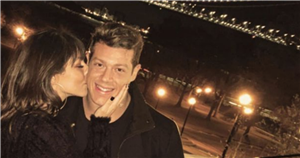 Roxanne Pallett secretly married her boyfriend in New York last year and the couple recently announced they are expecting a baby but who is the mysterious groom Jason Carrion?

Roxanne 38, met Jason in August 2019 in Brooklyn after the actress fled to New York after her controversial appearance on Celebrity Big Brother in 2018.

She left the UK for New York soon after and the actress met her now husband as she was new to the city. She ran into Jason as she got out of a cab and appeared lost in New York. Jason 33, was born and raised in Brooklyn and works as a New York firefighter.

The couple have been together since they met and married last year. Jason spoke of their love: “Roxanne and I have a love unlike anything I could have ever dreamed of. I couldn’t have asked for a more memorable wedding day.”

He has been in the spotlight himself appearing on the reality show Married at First Sight in 2014. Jason and his bride in the show Courtney Hendrix, were married for several years following the show but divorced in 2019.

The former Emmerdale star has just announced her and Jason are expecting their first baby together this coming autumn. The couple live in New York and out of the spotlight.

Roxanne decided to leave the UK following the storm surrounding her controversial appearance on Celebrity Big Brother and also left her then fiancé Lee Walton to start a new life out of the spotlight in New York.

During her time on Celebrity Big Brother, Roxanne falsely accused former Coronation Street star Ryan Thomas of attacking her during the show.

Roxanne’s false complaint against Ryan drew 25,237 complaints to Ofcom and the series was marked as the “most complained-about TV show of the decade” and the actress was branded “the most complained about woman on TV”.

The criticism came following the actress’ accusation that soap star Ryan Thomas punched her, but later claimed she got it “massively wrong”.

Roxanne appears to have found a new life away from the spotlight in New York and is starting a new life with her new husband and first baby on the way.

The couple wed in a top -secret lavish ceremony to a small group of family and friends in the Big Apple. The ceremony took place in Brooklyn at the Lutheran Evangelical Church with only 10 of their closest friends and family in attendance.