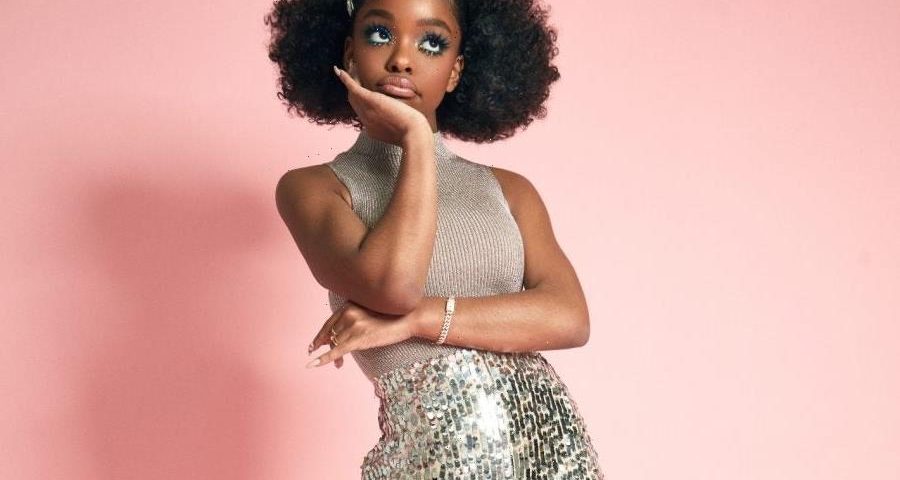 When Marsai Martin was approached with the opportunity to host a virtual awards ceremony for Invisalign as part of their ChangeMakers program, honoring young people making a difference in their communities and rewarding them with $5,000 to continue their work, she jumped at it. According to the star, bringing smiles and joy to people, whether on Blackish with her impeccable comedic timing, or through opportunities like this one, is part of her purpose. Martin also knows a thing or two about making an impact at a young age because she’s done it. The 16-year-old is the youngest executive producer in Hollywood, helming her studio Genius Entertainment and using it to tell important stories that don’t often get the spotlight. That includes the upcoming adaption of the novel Amari and the Night Brothers and the 2019 hit film Little, which she came up with the idea for when she was 10. She’s only getting started.

“It’s always been my thing to just go for it. Whatever I wanted to do, I just go for it because the possibilities are endless,” she tells ESSENCE. “I mean, as soon as we did Little and saw how much of an impact that made, and it just came out of my head, it was probably one of the greatest things that I have ever experienced and felt in the best way possible.”

She adds, “It just all felt natural, producing. You don’t have to be starring in something to actually get the overall feeling of the love and creativity. So it’s still amazing to be behind the camera as much as I love being in front of it. Then eventually I can branch off to directing, writing, all of the above.”

Before she completely dominates the entertainment industry though, Martin is just trying to find the time to be a kid. She turns 17 this summer, which when mentioned, sounded like a daunting reality for her. “Time is moving too fast and I blame COVID, because we lost a year,” she says. Since the pandemic started last March, she filmed two movies in her closet in quarantine, returned to on-set work and managed to do all of that while keeping up with her schooling, maintaining straight A’s. Incredibly impressive feats. Still, she’s hoping she can soon find the time to enjoy the fun and experiences that most high schoolers have, despite not being your ordinary teen.

“Learning how to drive. I need to do that,” she says. “Honestly, I’m still a kid at the end of the day. Obviously not everything is work, so I still want to get to know the teenage things. But yeah, just the simple stuff, but mostly the driving part. I need to get that done, so hopefully, that will be done. I will get my license by the end of this year, hopefully. But work is very chaotic right now, so we’ll see.”

Where Martin relates to the average teen is in the efforts she’s made to build solid confidence. Her connection to Invisalign, aside from the ChangeMakers program, comes from the fact that the company played a special role in helping her have the self-assurance she showcases on social media and on the red carpet, being affirmed by the who’s who of Hollywood with every smile she flashes.

“I feel like a lot of people know that I had a gap when I was younger. There was a big one and it just went down the line in my family,” she says. “My grandma had one, my dad had one. It was more of a family thing. And I ended up closing it, didn’t get veneers or none of that, but it’s just one of the things that I wanted to do. And Invisalign definitely helped that in the most painless way possible, because Ms. Girl, I did not want no braces. At the start of my Invisalign journey, I thought that was the only thing that could help me close my gap was the braces. And I was like, oh, absolutely not.”

“So when I found out about [Invisalign aligners], it was so great,” she adds. “Honestly, I gained a lot of self-confidence from it. And even to this day, I don’t need my retainers anymore, but I still wear them because I like how my teeth look with them on. It’s pretty cool, but I think they’ve helped me in so many ways.”

Bold confidence, not only in your look, but also in your ideas, your dreams, whatever you want to go after, is something the star embodies. It’s paid off greatly thus far for her. It’s also something she’s hoping to encourage other young people to embrace. As she prepares to emcee the ChangeMakers event on Saturday, July 10 (at 5 pm PST), honoring 100 influential teens doing everything from delivering care packages to those in need to providing swimming lessons to kids with disabilities, Martin also continues to inspire people, young and not so young, by being fearless.

“I really want to inspire anybody out there that wants to just do anything at any age. I mean, it’s life and life happens, or society thinks you’re in a bubble that you need to be in, or be or act a certain way. That’s not true at all,” she says. “So to show people that you can do whatever you want and be wherever you want to be is the biggest thing for me, because a lot of people will tell you otherwise.”