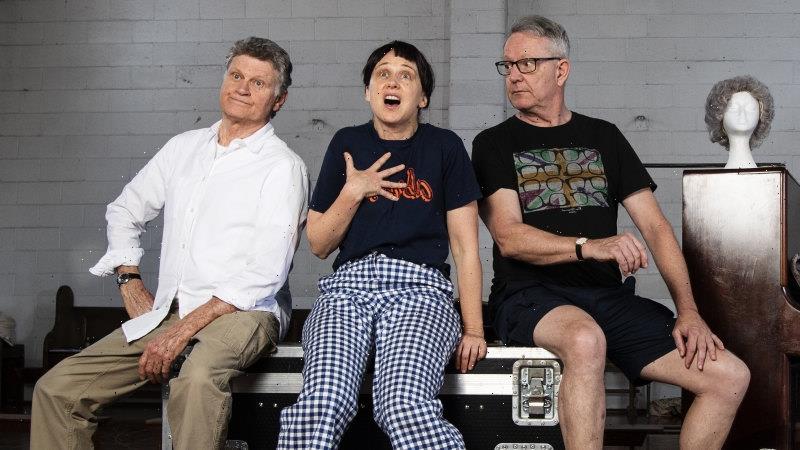 For the Wharf Revue crew, the past year’s shenanigans here and overseas have presented what military types might refer to as an unusually target-rich environment.

It seems that everywhere Jonathan Biggins, Drew Forsythe and Phil Scott – joined this year by Mandy Bishop – cast their collective mordant eye there are politicians virtually lining up to have the piss taken.

The 21st annual production, which opens at the Seymour Centre on November 23 and is called A Can of Worms, has all the makings of a classic. 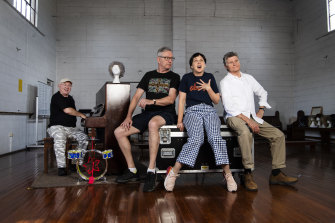 Rupert Murdoch locks horns with Mephistopheles who has come debt collecting, the Queen goes platinum blonde in honour of her upcoming jubilee and Gladys Berejiklian does a turn in the style of Gladys Knight as she starts her post-politics career as a club entertainer.

“Not yet,” Biggins says, gleefully.

Inevitably, the gift that keeps on giving to satirists the world over – Donald Trump – also takes centre stage.

The list of who we can ‘do’ is getting shorter and shorter as more and more politicians die – and we get older and older.

“Biden delivers a very sombre and stirring speech about the clear and present danger that faces the world – Donald Trump,” says Biggins. “Trump is filming from his secret lair in the Caribbean – he bought Jeffrey Epstein’s island. Then he and Ivanka, with Baron on keys, give a preview of a new variety spectacular – the Von Trump Family Singers.”

It seems more to have been a case of what and who to leave out rather than where to mine fresh material. One deliciously offensive sketch that didn’t make the cut involved Scott Morrison and the second coming, with the messiah in hotel quarantine at the Novotel, Darling Harbour. The blue pencil also went through a promising number called Baby, It’s Woke Outside, tipping the bucket on political correctness.

This year the Wharfies have struck out on their own, after two decades under the Sydney Theatre Company banner. Rehearsals have been in the homespun environment of the Rozelle School of Visual Arts, where the tiny company has had to get used to not having the resources of the STC on hand. The show even opens with a self-referential number reflecting the fact the revue is now a “budget production”.

“That way, if anything goes wrong, we’ve already covered it,” Scott quips.

Much has changed in the two decades the Wharf Review has been skewering the not-so-great and less-than-good, not least the rise of social media platforms like Twitter and Facebook and meme culture generally. But Biggins insists there is still room for a shared comedic experience.

“It’s not the same as sitting in a room with 500 people laughing together,” he says. “And there’s also the ability to get serious at times, too. I think the Queen is quite touching. And Bob [Carr] is quite serious.”

The longevity of the show and its performers also brings with it a practical consideration, says Forsythe.

“The list of who we can ‘do’ is getting shorter and shorter as more and more politicians die – and we get older and older.”

Mounting a topical review means the material can be overtaken by events at any moment – such as in 2015 when Malcolm Turnbull elbowed Tony Abbott aside for the top job. On that occasion, Scott stayed up all night rewriting a key piece of the show. This year there are some concerns about the Queen, who has not been in good health. What if HRH doesn’t last the course?

A Can of Worms runs at the Seymour Centre from November 23 to December 23.

TV, movies, Find out the next TV, streaming series and movies to add to your must-sees. Get The Watchlist delivered every Thursday.