Protections preventing redevelopment of historic Willow Grove were quietly removed last year paving the way for the building to be demolished for the Parramatta Powerhouse.

Former Sydney Lord Mayor Jeremy Bingham, a lawyer specialising in local government law, described the removal of the restrictive covenant on the land in April 2019, which left the historic building and its grounds unprotected, as immoral and an act of "sheer bastardry". 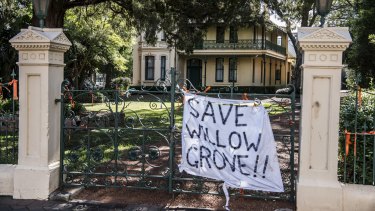 Land title documents show that Parramatta City Council officers applied through the Office of the Registrar General in January 2019 to lift restrictions that blocked development of the garden forecourt of the Italianate villa. The council had imposed the safeguards 30 years before.

The council said it made the request to meet a pre-condition set by the state government two years earlier for the $140 million sale of the riverside site.

Willow Grove, a former maternity hospital built in 1891, is the only villa of its type in the Parramatta CBD. It, and a row of 19th-century terraces known as St George's Terrace, are to make way for the new $840 million Powerhouse museum project which promises jobs and modern cultural facilities for western Sydney.

Campaigners seeking to save Willow Grove say the government's condition contradicts the Premier’s assurances that it wanted to preserve local heritage where possible. 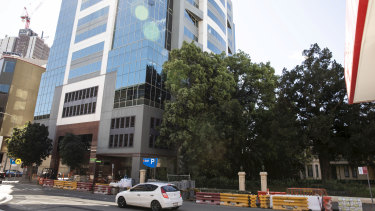 Parramatta Labor councillor Donna Davis said it showed the government never had any intention to save Willow Grove or to incorporate it into the Parramatta Powerhouse design.

"There were three owners during the time that the restriction was placed on Willow Grove and all three accepted the requirement to protect the heritage building and garden forecourt," Cr Davis said. "If the state government had intended on saving Willow Grove from demolition, they would never have required the removal of the restriction from the title prior to sale."

The revelation comes as members of the Upper House inquiry into the museum project will be given their first tour of Willow Grove on Friday.

Infrastructure NSW, the agency driving the museum project, is poised to recommend that Planning Minister Rob Stokes greenlight the Parramatta Powerhouse project, with some amendments.

But the Construction, Forestry, Maritime, Mining and Energy Union (CFMMEU) has slapped a green ban on the two locally heritage-listed sites amid growing public calls to have them saved and incorporated into the museum's design.

A NSW government spokesperson said the Powerhouse Parramatta site was acquired in accordance with government processes. "Removal of all encumbrances and restrictions prior to settlement is usual practice with the sale of property," they said.

The restrictions had originally been imposed in 1988 when the then owners of Willow Grove accepted payment from Whiteholme, the developers of the adjoining multi-storey tower, for the transfer of development floor space rights. The legal process was a relatively new mechanism which transferred potential development value of a heritage site to a neighbouring property.

Whiteholme's then project director, Rob Burgess, helped negotiate the transfer of air rights from Willow Grove to the neighbouring GE building. In exchange for substantial extra floor space on the adjoining site, the owner accepted conditions, established on title, preventing any development of the garden forecourt and refurbished the building.

Willow Grove was to have been effectively protected from development for what Mr Burgess understood was in perpetuity.

"In my opinion, it was a major win for public protection of Willow Grove and it staggers me that it wasn't for all time," Mr Burgess said. "How, in the public interest, can you unmake a legal process?"

Mr Bingham, an original architect of the air rights scheme, said that in removing the restrictive covenant council had reneged on an arrangement that would have protected the site.

"It's a sheer act of bastardry that shows a lack of concern for the heritage item," Mr Bingham said. "It's immoral but not illegal. There is not a legal system in our property law capable of protecting the heritage item."

Council said the restrictions had been removed as required before sale and it did not alter the local heritage protections for the site.

"Council has continually supported, and advocated to the NSW government for, the retention of heritage buildings Willow Grove and St George's Terrace," the spokesperson said.

The Heads of Agreement setting out the terms of sale was signed in 2017 while the council was in administration. One source privy to the negotiations, who asked not to be named as the discussions were confidential, said government staff had applied considerable pressure on council officers who had feared losing the Powerhouse project to a rival council.

But Mr Bingham said it was "double talk" if council's executive was arguing for protection of Willow Grove while acquiescing to the removal of the very protections that would have guaranteed it.