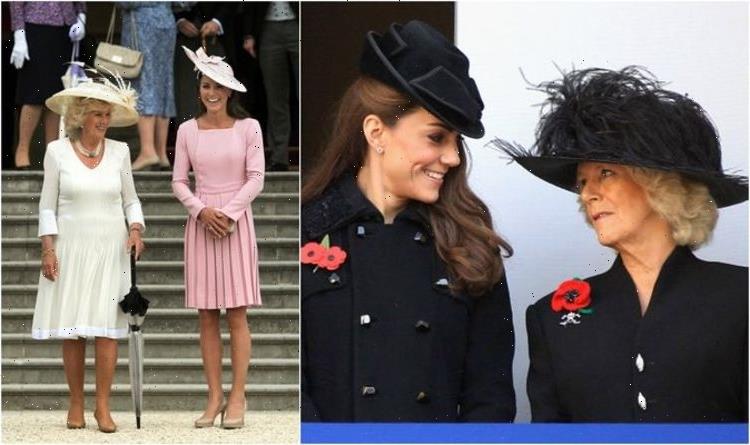 Kate and Camilla attend Order of the Garter event in Windsor

Kate Middleton and her step-mother-in-law, the Duchess of Cornwall, are both married to future Kings. Their relationship has often looked very close to royal watchers, as their bond is especially unique. Prince Charles and Prince William are two Kings-in-waiting, and their wives will most likely become Queen Consorts.

Judi James, a body language expert, spoke exclusively to Express.co.uk about the relationship between Camilla and Kate.

Judi said: “These women have a shared destiny in their roles as future Queens although their body language suggests two very diverse personalities and approaches to those roles.

“Camilla began her route to the throne as one of the most hated women of her day.

“Her route to where she is today has been all about baby steps and PR.

“Which is why she still tends to look like a woman who prefers to stay out of the spotlight and who displays clear signals of anxiety and reticence when she is placed in it.

“Marriage to a future King means, to Camilla, a role that is all about supporting, encouraging, and even comforting her husband.

“She looks primarily tuned into him and her body language places her in a more peripheral role when they appear together.

“Charles is the star of their show, and she looks comfortable with that, having witnessed how he reacted when the spotlight was taken away from him by Diana,” she said.

“It would be impossible to imagine Camilla taking any steps to change or modernize the monarchy when she is Queen, whereas although Kate is also a careful keeper of the status quo her current campaigns and skilful use of more modern options like social media and Zoom, plus her much more evenly-balanced status signals with William suggest she will be updating the role.

Judi continued: “For Kate, the spotlight is inevitable, and she has grown to look confident and comfortable with that.

“Having begun royal life as part of a very mirrored double act with William she now regularly appears and works as an individual royal and star member of the Firm.

“Every week now we seem to see Kate blossoming in the spotlight, whether she is helping to choreograph William and Harry following their rift or being photographed abseiling on an outward-bound course or playing tennis with Emma Raducanu.

“Her solo projects have been wide in their scope and backed by some very professional and passionate camera spots from Kate.

“Unlike Camilla, Kate is also the mother of another future king, as well as being married to one and this gives her a very central and concrete role in the royal line-up,” Judi explained.

“Their body language together suggests only a weak form of empathy and a polite friendship.

“All the royals must be aware that anyone who fails to accept Camilla will fail to connect with Charles and Kate’s body language with her father-in-law suggests a fondness a closeness that has increased with time.

Judi said: “There are poses between Camilla and Kate that suggest a wariness and probably the best example of some levels of subtle disconnect came when the two future Queens accompanied the current Queen for an outing that included a cake-cutting ceremony.

“Camilla grew agitated as the Queen chose a large sabre to cut the cake with and she was seen fretting and finally nudging Kate who stood at her side, presumably in a bid to urge her to intervene.

“Rather than siding with Camilla though, Kate subtly sided with her very stoic grandmother-in-law and just stepped to one side to ignore Camilla’s silent request for support.

“Having said that, there are of course poses showing the two women smiling as they share eye contact and posing in a way that does suggest some fondness despite the fact their approaches to the role, they will be taking might be completely different,” Judi explained.