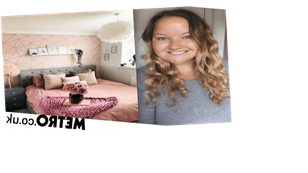 First-time buyers, in particular, will know that you can always get more for your money if you buy somewhere more dated and do it up yourself – especially if you do your renovating on a budget.

That’s exactly what homeowner, Lisa Allison, 33, did to her run-down two-bedroom property in Blidworth, Nottinghamshire.

Despite having a modest £5k budget and just four weeks in which to complete the work, she’s got her place looking immaculate, thanks to a few penny-pinching tups.

The media and digital content specialist bought the property in October 2020 and turned it around in a month. Not only did she smash her goal, but she tripled her £5k investment, with the house now valued at around £15-20k more than what she bought it for.

‘I bought my home for a good price due to all the work it needed, so I knew that by doing it up I would add some value, but I was surprised by how much,’ Lisa told money-saving community LatestDeals.co.uk.

‘I thought that I may just cover my costs, but an estate agent has informed me that the renovations have added around £15-£20k to the property’s value.

‘I’m over the moon with the result. It means that down the line, when I do sell up, I will have that extra money, my deposit and any equity I have built up in the home as my reward.’

Lisa hadn’t originally planned on a renovation project – bar some painting – but found this property for a great price and put in an offer. 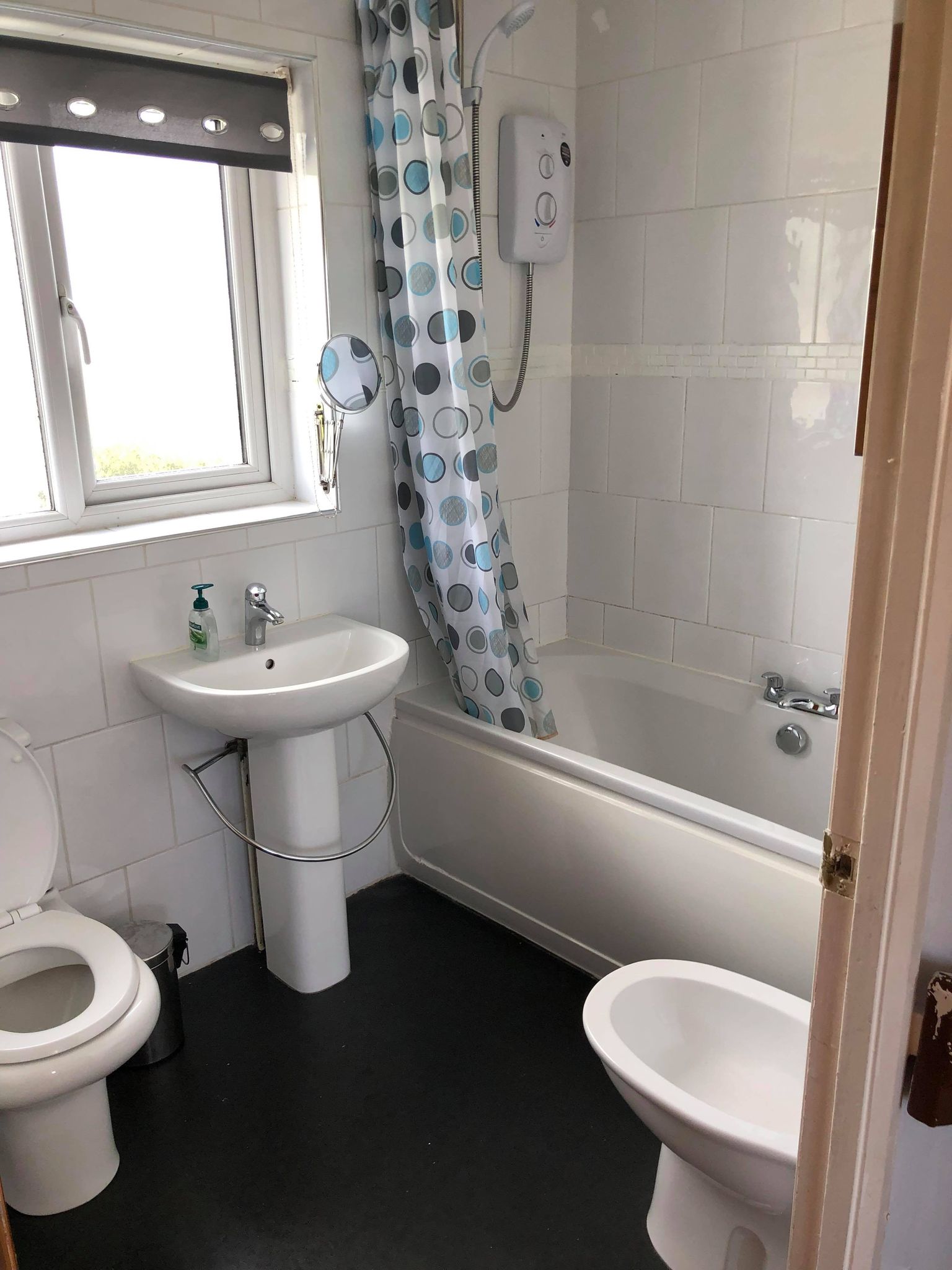 Lisa’s excitement soon turned to nerves when she came to terms with the amount of work that would be involved to make the property liveable.

‘It wasn’t a house you could just move into,’ she says.

‘I knew it would take a lot of work, but I had fallen in love with the property and started thinking about all the things I could do to turn it into a home. I thought it would be easy, but I was so wrong. I don’t regret it though.’

Starting with colour schemes, Lisa decided to go with rose gold, being inspired by blush pink breakfast bar chairs she saw in Homesense.

She then got to work on what would need to be done in the small amount of time she had off from work.

Lisa says: ‘I needed to get the whole house turned around in four weeks to get it ready in time for Christmas, but I could only take two weeks’ leave from my job, so most of the work happened then. I wanted to do as much of it as possible myself in order to keep down costs. 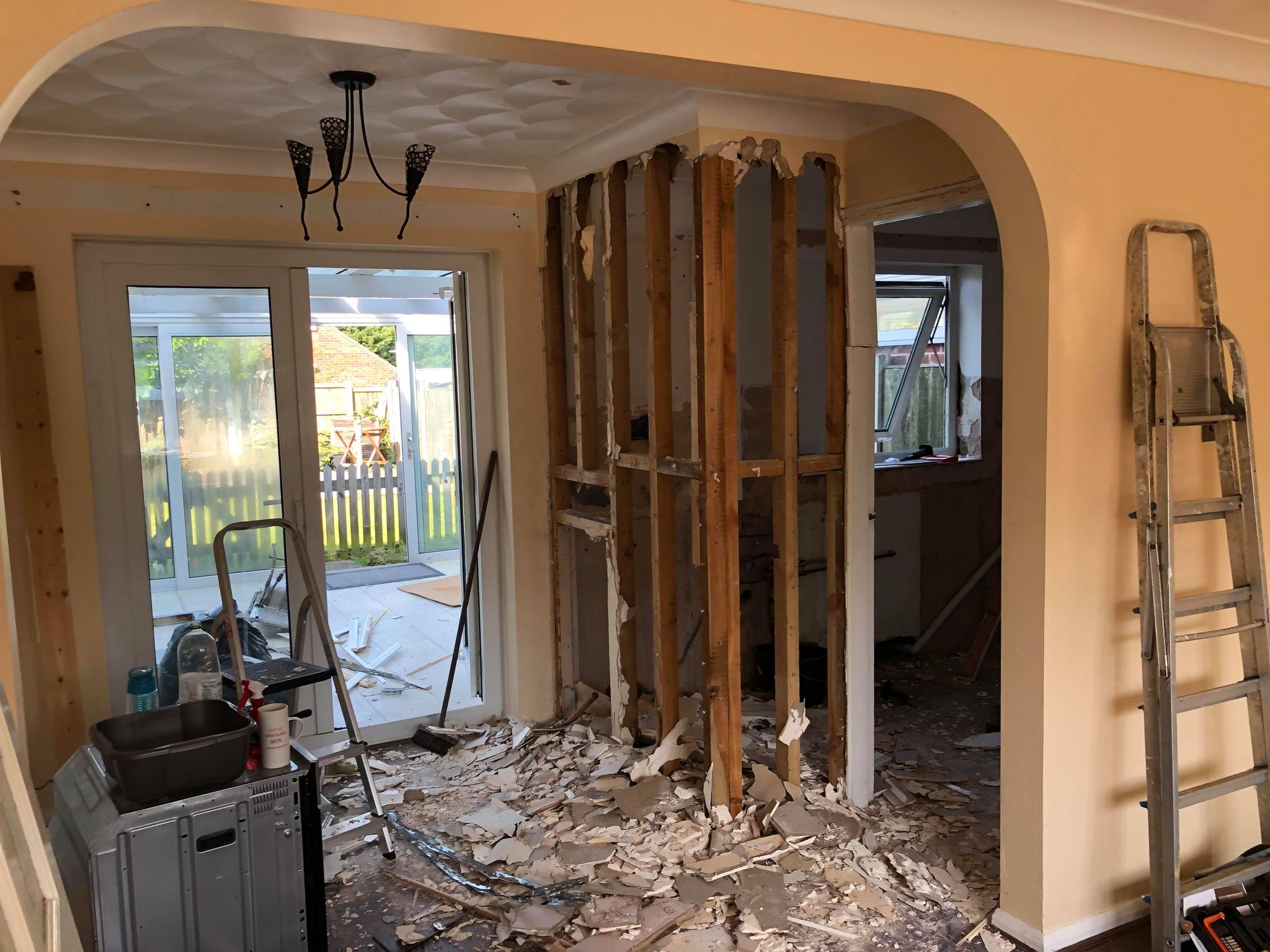 ‘On the first weekend I knocked down the dividing kitchen wall and ripped out the kitchen.

‘The plasterer came to do the kitchen not long after. The second weekend was spent taking all the rubbish to the tip, ripping up the flooring, and removing the radiators.’

Lisa’s two weeks off work were used to finish the new kitchen and decorate all the different spaces of the house: the master bedroom, the living room, kitchen, dressing room/office, conservatory, and garden.

Most days, she was working from 7am to 10pm, which Lisa says was tough at times, but she was determined to stick to the plan.

Calling in the pros and the cost of the new kitchen sucked up the lion’s share of her budget. 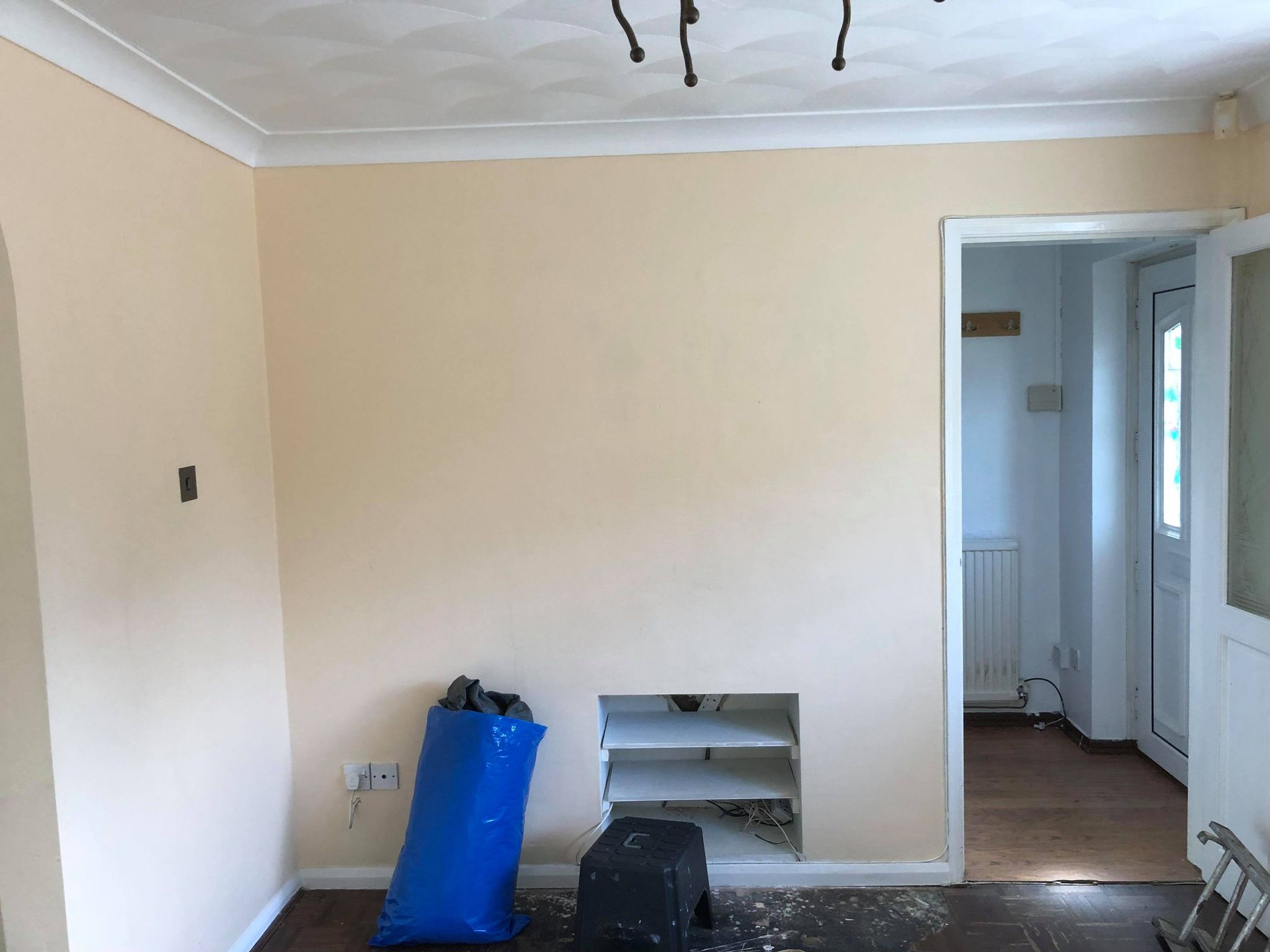 ‘I shopped around for tradespeople and, in the end, I went with a recommendation from a friend who could do the jobs I needed for a good price,’ she says.

‘They fitted the kitchen, but I helped with certain parts, such as building the cabinets, which saved me around £400. I also paid pros to fit new radiators, do the plastering and fit some flooring.’

A friend helped Lisa with the painting while her dad helped with some trickier jobs, such as replacing the electrical sockets. All the items were found cheaply online, or bought in the sales where possible. Lisa tackled the tiling herself and fitted lino flooring in the kitchen and bathroom.

‘I also changed the shower door and the sanitary ware in the bathroom, which was my first time using a drill,’ she says.

‘I bought a cheap secondhand fireplace from Facebook Marketplace for the living room and painted it grey to match the colour scheme. I also added all the new light fittings, filled any holes and cracks in the ceilings and walls, sanded and painted them, and did all the wallpapering and glossing.’ 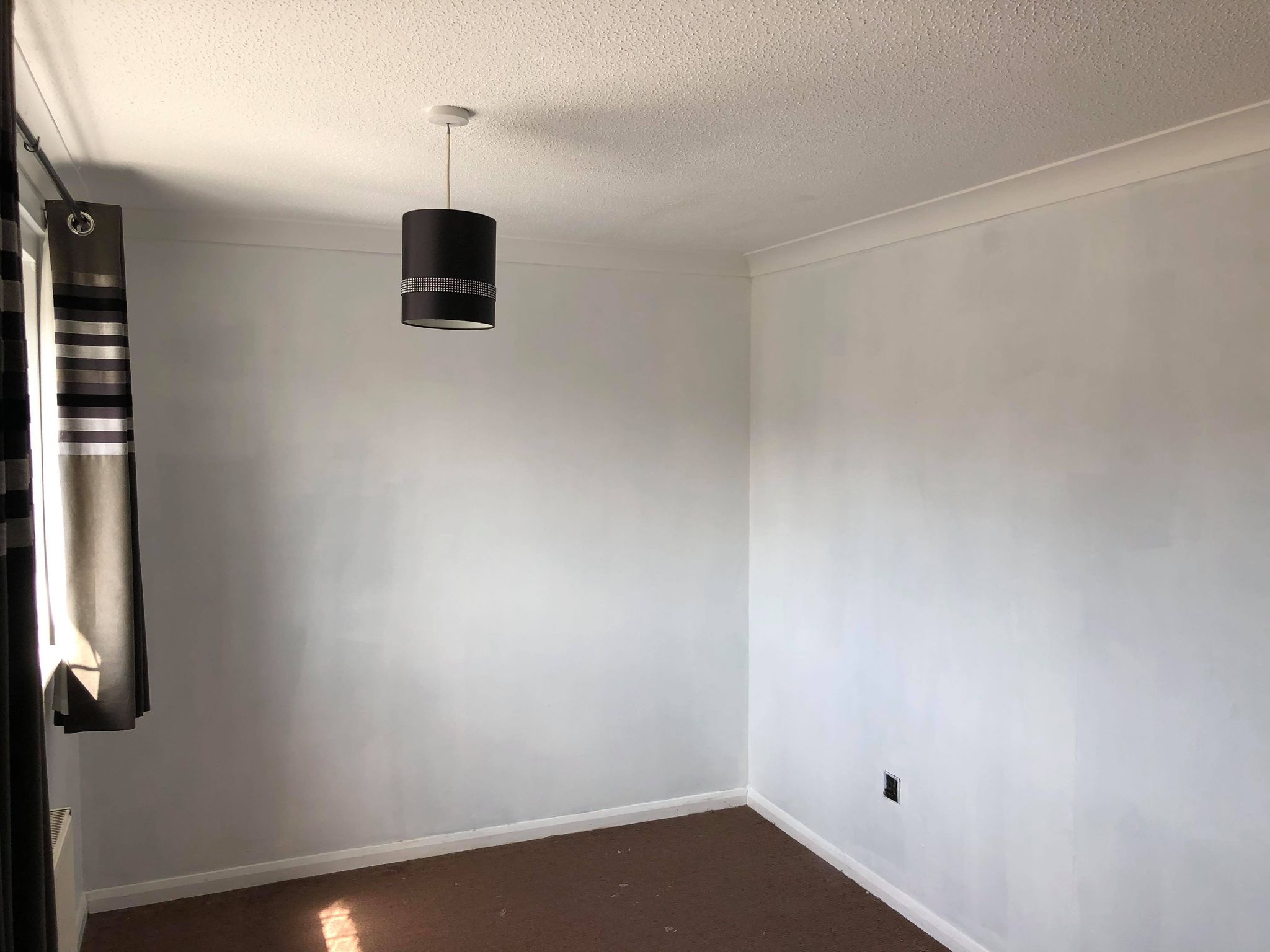 To save money on the kitchen, Lisa took inspiration from a marble design she’d seen on Pinterest, finding a £1,000 option at B&Q (which she had a discount code for through her work’s perks scheme).

Because of the room’s shape, she couldn’t opt for a secondhand option, but she kept costs down by using fewer units with more storage and going for laminate worktops over granite or marble. 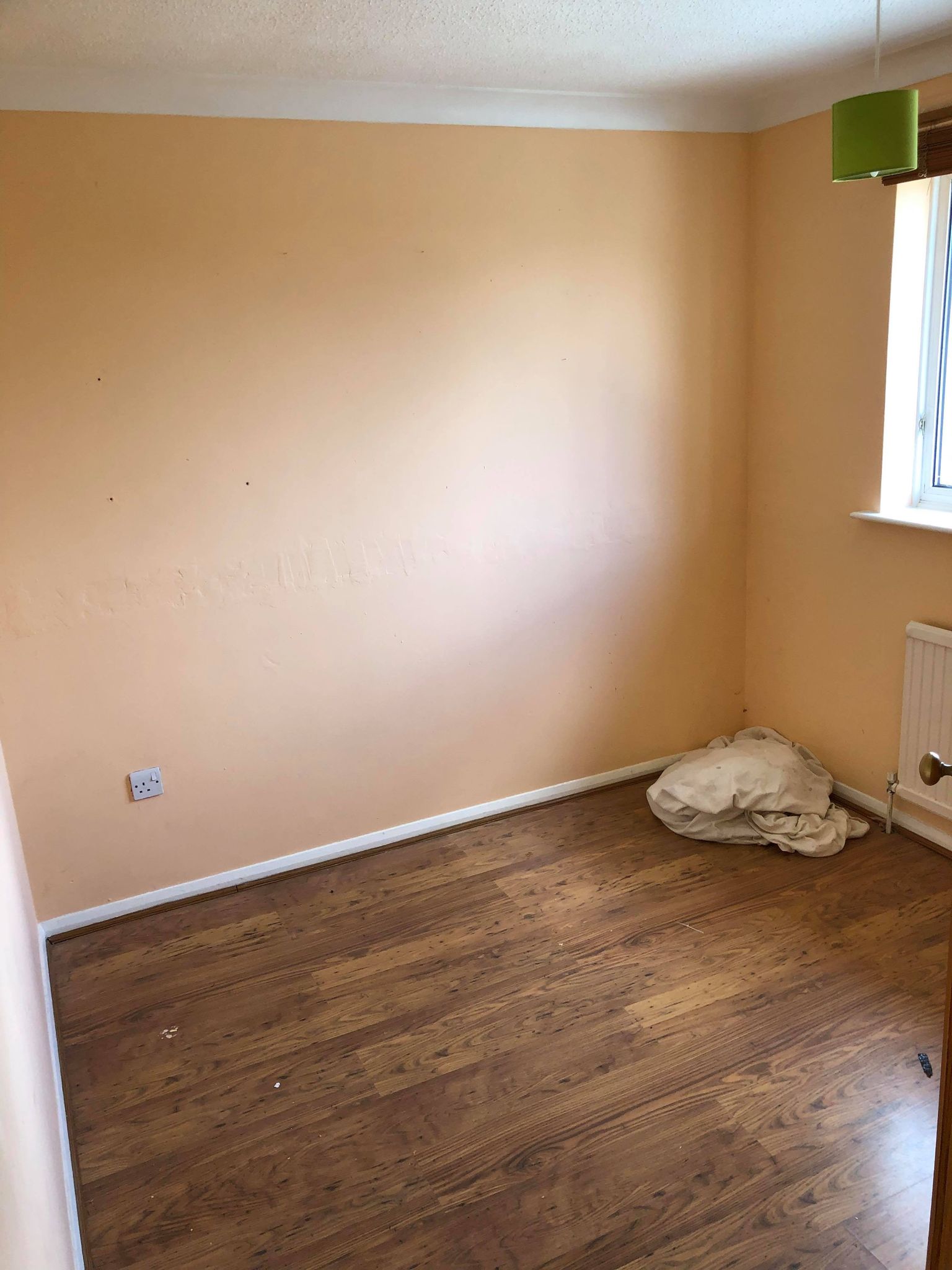 When it came to the bathroom, Lisa says: ‘The bath, sink and toilet came with the house, but I changed the bath panel for a new one. I also bought a new, mirrored shower door to replace the curtain – it helps the bathroom look bigger.’

Using bargains from B&M and £30 flooring and a grout pen, the bathroom now looks like a totally new one, even though the fittings have stayed the same.
“The best bit is the flooring. It cost me £30 for the lino and I fitted it myself.

Lisa then looked to the garden, extending the existing wooden decking area with the help of her dad and was gifted a secondhand wooden dining table and chairs by her parents.

‘They were green and brown and looked awful when I got them, but I gave them a lick of paint with Cuprinol Garden Shades, which is especially for outdoor furniture,’ she says.

‘The rattan sofa was secondhand from Facebook Marketplace, the rug was cheap from Aldi and the egg chair was the most expensive item at £150 from B&M.’

Here’s what Lisa allocated to each room upgrade (including the cost of new radiators, sockets, lights, blinds and decorations where appropriate)

Lisa is elated with her newly decorated house.

‘I had a £5k budget but I managed to come in under that, so I used the extra to pay for a new front door,’ she says.

‘Sometimes, I can’t believe that this is my house and that I put all the work in to create my perfect first home. I feel so proud – especially as most of the upgrades were done in two weeks.

‘I used to look at the amazing homes on Instagram and think I would never have that, but I love my home so much. I’ve had so many compliments from friends and family, and even strangers who’ve commented on photos I have posted on social media. I’m waiting to have more people over after the pandemic so that I can show them all the hard work I’ve done.’