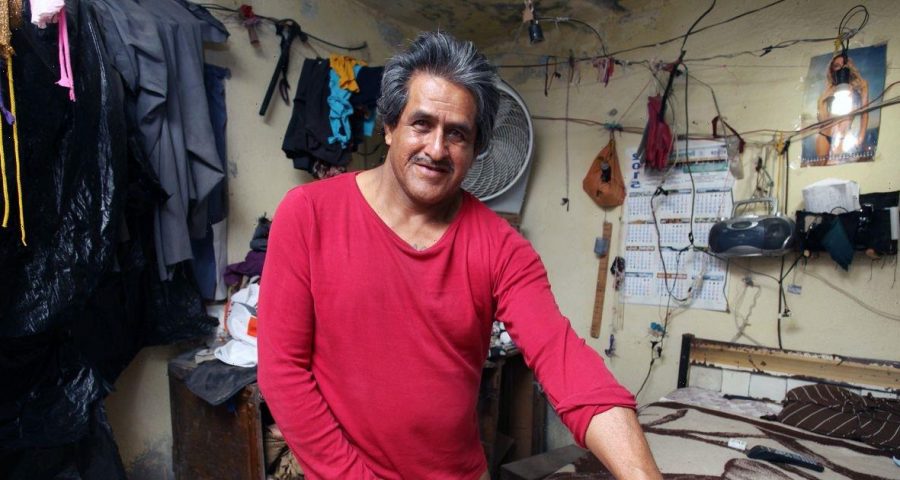 Willy waving contests don't come much bigger than this.

Roberto Esquivel Cabrera, who claims his penis is 18.9 inches long, reckons he's the proud owner of the world's biggest wanger.

But Jonah Falcon, his chief rival in the battle of the bulge, has cast doubts on the validity of Roberto's assertions and says that it is he who is in fact the man with the most massive member.

READ MORE: Meet the five sportsmen who bonked over 34,000 women between them

Only one of them can be telling the truth, though, and even after closer examination of the key evidence, it's hard to say who out of the pair possesses the longest schlong.

It all started back in 2015 when Roberto made the bold claim that his old chap measured 18.9 inches in length – about one third as tall as actor Danny DeVito.

That year, his chopper was recognised by the World Record Academy as being the biggest around.

However, it didn't take long for suspicions to be aroused.

Some years earlier, back in 2001, Roberto was reportedly deported from the US to his native Mexico after a string of indecency charges and allegations that he exposed himself to two underage girls.

But in more recent years he has kept his tadger wrapped in bandages because, he claims, he gets a lot of urinary tract infections. He even says he's been registered as disabled because of it.

One person who has more insight than most is radiologist Dr Jesus Pablo Gil Muro, who has seen Roberto in his clinic and even performed a CT scan on his trouser snake.

In a blow to Roberto, he believes his pecker is in fact only six or seven inches long – pretty average.

He became suspicious when the patient refused to remove his the bandages and would not let him see the skin.

"When he came here to do a CT scan, my first impression was that it was a unique and unusual case," he said. "I had never seen a patient like Roberto.” He added: "What the CT scan showed was that there is a very large foreskin. It goes just before the knee.

Roberto, after speaking to a psychiatrist, admitted he began trying to make his Johnson longer when he was still a teenager because, in his own words, he was “obsessed with the penis length”.

He is believed to have been using weights to stretch it since then.

Now, although he insists he is happy with the size of his phallus, he's also told how it has had a negative effect on his love life because women are too scared of its size to have sex with him.

These days, though, Roberto, 59, has a "miserable" existence, living alone in Saltillo, in a room given to him by his brothers.

Medical professionals have advised him to allow them to help him achieve a "normal shape", but he would apparently prefer to have a “penis bigger than the rest of the people”.

Dr Jesus David Salazar Gonzalez said: "He began with this enlargement since he was a teenager, wrapping bands around his penis with weights and trying to stretch it.

"But he doesn’t accept it – he’d rather have a penis bigger than the rest of the people."

Jonah Falcon, a 52-year-old actor from New York, has branded Roberto's claims "ridiculous" and "kind of desperate". He firmly believes his 13.5-inch penis is bigger.

"His penis isn't 19 inches,” he said. "Doctors have acknowledged this and said he could have a normal sex life if he is essentially circumcised.

"The man stretched his foreskin constantly, from what I understand, but it's normal underneath.

"I think it's ridiculous and he seems kind of desperate. No matter how big he is, it's not going to change the fact that I'm 13.5inches."

He's claimed that he could perform oral sex on himself by the time he was in adolescence and that he can completely envelop a doorknob with his foreskin.

Owing to the size of his member, he says erections cause him to become lightheaded because of the blood rushing to his penis.

In 2012 he claimed he was stopped by security officers at San Francisco International Airport because of the large bulge in his trousers.

The following year he released the song, It's Too Big, and was the subject of the documentary, UnHung Hero. He has also since appeared in TV shows including Melrose Place, The Sopranos and Law & Order.

On his rivalry with Roberto, he added: "I'm not competing with anybody, at least not directly. It's not going to change who I am and what I have and in my eyes, it's kind of pathetic."

Sadly the Guinness World Records don't have a category for the biggest penis, so it remains open to debate…