Would you leave your little darling with a zoom nanny? They claim to be a godsend for mothers struggling to work from home

This afternoon, instead of flopping in front of CBeebies, my four-year-old son, Sebby, practised his alphabet, sang nursery rhymes with gusto and listened, rapt, to a succession of improving stories.

No, I wasn’t having a particularly conscientious parenting afternoon. I spent the entire time catching up on work emails while drinking a cup of tea that was, for once, still hot.

My son was being held in thrall not by me, but by a nanny on Zoom, who lives more than 100 miles away.

His little face was trained on a laptop screen, his conversation was with a stranger and when he reached out, his fingers grazed polarised glass rather than skin. 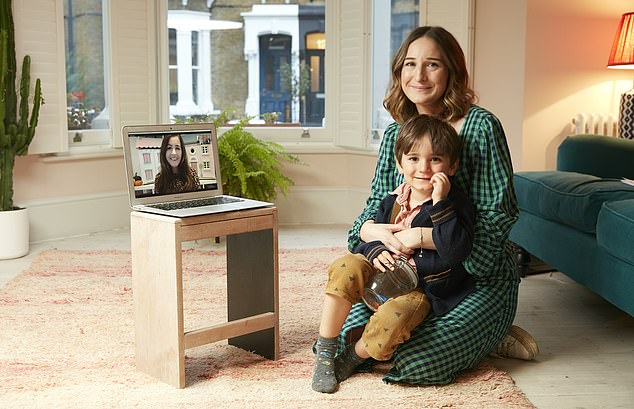 Mother-of-three Rebecca Ley gives her verdict on a zoom nanny session with Danielle Manton-Kelly, aka the Enchanted Nanny. Pictured: Rebecca with son Sebby, and Danielle on screen

Online nannying is the latest parenting trend born out of lockdown, with so many working, homeschooling parents at the end of their collective tether.

‘Virtual nannies are a new but fast-growing area of our business because of the need to social distance and with so many childcare workers on furlough,’ says Richard Conway, founder of childcare.co.uk, a database connecting 2.5 million parents and childcare providers. ‘We have 1,500 online nannies on our books, with sessions costing an average of £12 an hour.’

Zoom nannies are recommended for children aged between three and eight years old — but I was deeply sceptical of booking one to take care of Sebby and his two older siblings, Isobel, ten, and Felix, seven. Surely nannying is, by definition, one of the things you simply can’t do virtually?

Since Sebby was a baby, we’ve employed our own flesh-and-blood nanny — Stavroula. She is wonderful — firm but fun. She reads endlessly to Sebby, swooping him up into cuddles or letting him snuggle into her at story time. This visible warmth is integral to the care she provides.

Dr Sophie Niedermaier-Patramani, a paediatrician for baby food company Little Tummy, says tactile play is vital for a child’s development. ‘A child discovers the world with all five senses,’ she says. ‘What children see and hear during a virtual babysitting session might be difficult to monitor for parents. It will be a question of how much you trust the babysitter.’

Another issue is screen time. Even before lockdown, everything seemed to be moving online, including my older two’s weekly maths and spelling homework. Factor in the myriad online entertainment options and it’s easy to see my kids being primed for a future bathed in blue light. So why would I want yet another reason to put them in front of the laptop? 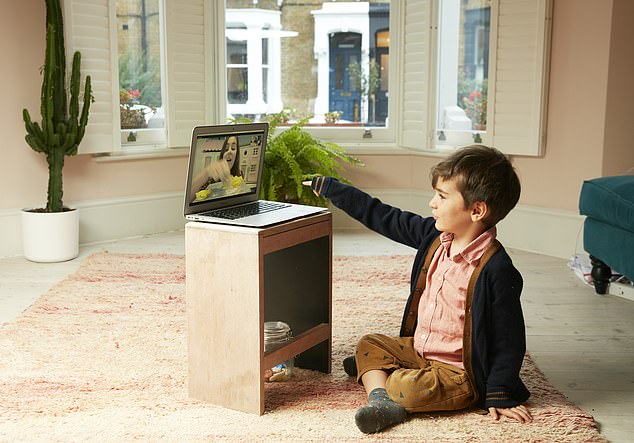 Danielle who is a former primary school teacher, charges up to £15 for a session lasting 20 to 30 minutes. Pictured: Rebecca’s son Sebby

But lockdown has been far from easy — my debut novel came out in September and I’ve been trying to write my second, while my husband, a journalist, has been working long hours from our double bed. So I can see the appeal of a reprieve.

A session with Danielle Manton-Kelly, aka the Enchanted Nanny, only persuades me further. A former primary school teacher, she began running free online reading groups for children, which led to parents asking her if she could look after their kids one-on-one. She charges up to £15 for a session lasting 20 to 30 minutes.

Her charges are scattered across the globe — from New Zealand to India, Germany and France — and she looks after up to 12 a week, fitting them around her own three children (a fourth is on the way).

She says: ‘You can see how beneficial it is for parents to have a little break, and the little ones are so happy to be learning. Of course, this is no replacement for real-life childcare, but it’s an extra resource.

‘For safety, parents have access to all of my credentials and DBS certification, and I ensure the Zoom sessions are locked.’

When we join the call, a smiling Danielle appears on the screen, immaculate in a floral dress, with that warm but no-nonsense manner children find so reassuring.

She’s sitting beside a dolls’ house and all is cosy and neat, much like the Banks children’s nursery after Mary Poppins arrives. A Zoom-full of sugar indeed. 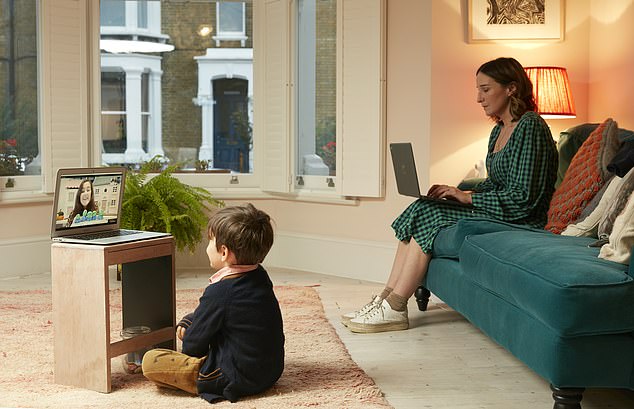 Rebecca said she felt a stab of sadness as she tried to concentrate on her work, but was also amazed how Sebby (pictured) was able to read basic words for the first time during the session

‘Shall we see what’s behind the door?’ she trills, and Sebby, initially reluctant, is hers. It’s a good trick — who wouldn’t want to look inside? Once she finds out that Sebby likes dinosaurs, a plastic T-Rex is used regularly as a prop. ‘It’s all about working out what the children are going to engage with,’ she tells me later.

Danielle encourages parents to show their children her YouTube videos before the first call, so she’s familiar to them.

Each session follows the same pattern. ‘We always start with the “hello” song, which includes a big smile and lots of waving, as well as some counting. We finish with Twinkle Twinkle. It gives the sessions a structure which the children get used to.

‘I can also provide emotional support by using characters to act out certain scenarios they might be struggling with, such as school after lockdown.’

Sebby is hooked. I feel a stab of sadness as I try to concentrate on my work nearby. Danielle is like the perfect teacher and mother rolled into one. She practises letter sounds with Sebby and I am amazed to hear him reading basic words for the first time.

As the session comes to a close, Sebby waves a cheery goodbye.

‘That was really good,’ he says. ‘When can I do it again?’ He spends the rest of the day talking about his new nanny. The one he has never met in person.

For When I’m Gone by Rebecca Ley, published by Orion Fiction, is out now.