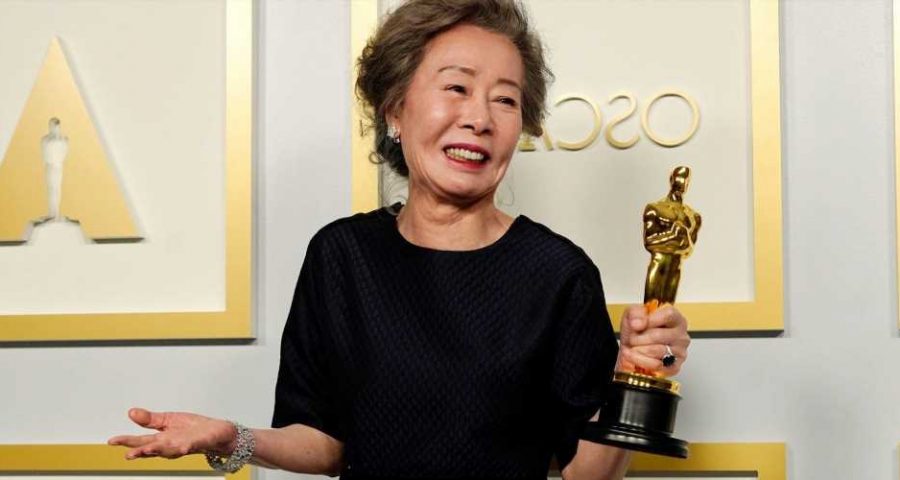 Oscar-winning Korean actress Youn Yuh-Jung is a fresh 73-years-young and objectively the best thing to happen at an otherwise snoozy Oscars on Sunday night. When she took the stage, I was struck by her dewy skin, her brilliant silver hair, and the titanic sapphire ring on her delicate hand. And this was all before she skewered Brad Pitt.

Pitt's Plan B production company produced Minari, the film for which Yuh-Jung earned her Oscar. Apparently, he wasn't around much. "Mr. Brad Pitt, finally," she quipped as she received her statue from the handsome boy. "Nice to meet you, where were you when we were filming?"

Following presenter banter is usually the part of the speech when winners do a lot of "wows" and "oh my gods" and heavy breathing into the mic. Yuh-Jung went in a different direction. "As you know, I'm from Korea and actually my name is Yuh-Jung Youn," she said. "Most European people call me Yuh-Young and some of them call me Yoo-Jung. But, tonight, you are all forgiven."

Sorry, Brad (and all of us Americans)! Not even your man bun could protect your ego from that devastating blow! The audacity to come at America's national treasure with both fists swinging was simply the pre-show entertainment. After an awards season marked by awkward Zoom small talk and heavy conversations about diversity and representation in the industry, Yuh-Jung embodied the "fuck it" energy of the rest of us watching at home — those who couldn't help but feel lethargic and dissociated while watching the one percent socialize in designer dresses at a celebration for individuals who (generally speaking) take themselves too seriously.

So when she mocked Brad, we laughed. When she thanked her two boys for "making me go out and work," and then held up her Oscar, adding, "this is the result — because mommy worked so hard," we were giddy with the LOLS. When she told 8-time Oscar nominee, 0-time winner Glenn Close that she was "luckier than you," we eeped at her frankness. (It came to my attention that she recently apologized for calling the British "snobbish people" at their own awards show and if that is not Big Auntie Energy, I don't know what is.)

In conclusion: Give Yuh-Jung another Oscar already! A starring role in literally anything! At the very least, she deserves her own hour-long Netflix special. She's an Oscar-winner, after all.