Premier Daniel Andrews has warned Labor supporters the key seat of Richmond will be decided by just “a handful of votes” at the state election, urging the party faithful to pull out every stop to get candidate Lauren O’Dwyer elected.

In a sign of how the battle for Richmond has become a contest for the hearts of progressive Melbourne, Andrews outlined a host of his government’s achievements. He argued the Greens could not make such reforms – including on issues such abortion rights, school and hospital upgrades the Metro tunnel, and renewable energy investments – from the crossbench. 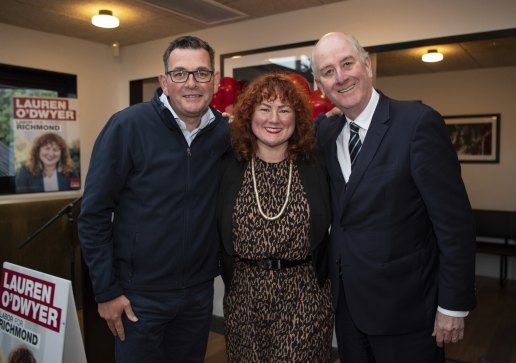 The ALP and the Democratic Labour Party have held Richmond for more than a century, but the Greens are eyeing this seat, which is on a nominal margin of 5.8 per cent after redistribution. Both parties have identified Richmond as a must-win at the November 26 state election, and are throwing considerable resources at it.

At a packed function room at Richmond’s Corner Hotel on Thursday night, Andrews told the party faithful only Labor – and not “commentators” – could implement progressive reforms, such as bringing back the State Electricity Commission, which he said would deliver publicly owned, and 100 per cent renewable, energy, and 59,000 jobs.

Richmond, which takes in the suburbs of Fitzroy, Collingwood, Clifton Hill, Richmond, Burnley and Cremorne, has been held by retiring MP Richard Wynne for 23 years. In his place, Labor is running O’Dwyer – associate director of First Nations foundations at the Arts Centre, Yorta Yorta woman and a former staffer to retiring MP Martin Foley.

At Greens candidate Gabrielle de Vietri’s campaign launch in September, federal Greens leader Adam Bandt issued a salvo to renters in the electorate – where more than 53 per cent of people rent their homes – describing Labor as being “just too close to the property developers”.

“Labor’s just too close to the property developers, and it’s making it harder for people to afford the rent, or own a home of their own.”

O’Dwyer, who introduced her speech with an acknowledgement of elders and country in Yorta Yorta language, said the election was a choice for Richmond.

“It’s a choice between talking on climate action – are you seeing a familiar theme here? – or actually delivering. What we are doing in these spaces is not just delivering, it is leading,” she said.

Andrews listed his government’s achievements through his eight years in power, nominating level crossing removals, school and hospital upgrades, and the Metro tunnel being delivered a year ahead of schedule.

“If you like it, you got to vote for it,” he said. “If you want it, you’ve got to fight for it. And if you stick with us, we won’t let you down. That’s the key message of this campaign.

“Our reform agenda is tangible. It’s real. It’s happened but there’s so much more we have to do.”

Here, he warmed to a familiar theme.

“That job will be harder, that job will be less certain, that reform will be very, very difficult if we have less seats, if we have replaced someone who has a profound record – an undeniable record of delivery [in Richard Wynne] – with a commentator.”

This story is part of our in-depth local coverage of the key seats of Melton, Hawthorn and Richmond at the November state election.