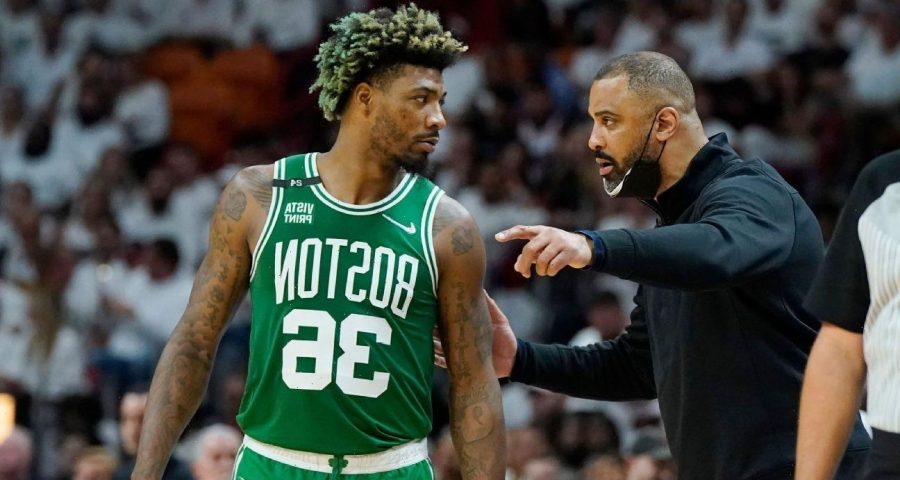 The 2022 NBA Finals begin Thursday night when the Boston Celtics visit Chase Center to face the Golden State Warriors. The series will feature two of league’s best offenses and defenses. The Splash Brothers are once again playing for a championship after a two-year hiatus with some new faces around them to help, while Boston boasts its own duo of Jayson Tatum and Jaylen Brown, who are making their first Finals appearance after reaching the Eastern Conference finals two out of the past three years.

Our betting experts break down the matchup and answer some of the most pressing questions ahead of Game 1.

All odds from Caesars Sportsbook.

What play offers the best betting value in this year’s NBA Finals matchup?

André Snellings, ESPN NBA fantasy and betting analyst: If the Celtics win this series, there’s a good argument that they’re likely to do so on their home court in Game 6. That would mean a 4-2 series win, so Celtics -1.5 at +210 is plus value for those backing the Celtics. For those backing the Warriors, I think the best value plays are either Klay Thompson (+1500) or Draymond Green (+1800) for Finals MVP. Stephen Curry is the odds-on favorite to win his first Finals MVP if Golden State wins, but there is little value at +100 odds. Thompson has a good shot with the best narrative. If he gets hot at key moments the draw of him winning Finals MVP after suffering two catastrophic injuries could be compelling. For Green, there’s a common sentiment that he was on pace to win Finals MVP in 2016 before he was suspended for Game 5 against the Cleveland Cavaliers. He is playing at a high level coming off the conference finals, and he’s such a lightning rod player that if he plays well he’ll draw the attention of voters.

Eric Moody, ESPN NBA fantasy and betting analyst: I find the Warriors to win the series 4-2 at +550 intriguing. Golden State will be well rested heading into the Finals with Gary Payton II, Otto Porter Jr. and Andre Iguodala potentially returning. The Celtics will be exhausted, especially after finishing two seven-game series against the Bucks and Heat. The Warriors have numerous players who can take over a game at any moment, and given Golden State’s playoff experience and record at home, I think the Warriors can win this series in six games. However, Boston won’t go down without a fight.

Anita Marks, ESPN betting analyst and Daily Wager contributor: I like Marcus Smart to have one steal in every game (+250). Smart won Defensive Player of the Year for a reason. He will guard Stephen Curry, which is a huge responsibility. The Warriors have a plethora of players who can go off at any time, but I doubt the Celtics will allow Curry to beat them. Smart averaged 1.7 steals a game during the regular season, including one steal in both games against the Warriors.

Erin Dolan, ESPN betting analyst and Daily Wager contributor: I would wait until after Game 1 to bet the series markets. However, if I had to place a bet right now I’d take the series to go seven games at +175. Home court doesn’t hold much weight, as the Celtics are 7-2 on the road this postseason. The series also features two stout defenses and two great offenses. The Warriors’ experience argument is absolutely valid, but the Celtics did get through the Brooklyn Nets, Milwaukee Bucks and Miami Heat. This is going to be a back-and-forth Finals, and in my eyes, there is value in it going to Game 7.

Joe Fortenbaugh, ESPN betting analyst and Daily Wager contributor: Boston to win in seven games at +600 offers some value when you consider the fact that +600 implies just a 14.2% probability of occurring. Both teams can win on the road and both teams feature elite defenses. Golden State has the championship pedigree while Boston has already proved formidable when pushed into a corner, as evidenced by back-to-back seven-game series wins over Milwaukee and Miami.

Tyler Fulghum, ESPN betting analyst and Daily Wager contributor: I think Boston is the slightly better team in this series. That being said, I cannot and will not ignore how dominant the Warriors are at home — where a Game 7 would be played, if necessary. If the series reaches a seventh game, I’m not sure I like the Celtics’ chances, so before we’ve seen a single game played, I think my favorite way to bet this series is Celtics -1.5 games (+210). Now, what might be a more efficient way to bet this series is waiting for Game 1 and hoping the Warriors take care of business. With Boston in an 0-1 hole, you can go ahead and take the Celtics at a discounted and better price in the series and hope they can win four of the next six games, which I think they can. If you like the Warriors, I would just play Golden State to win in seven games (+325).

Who do you see winning the Finals MVP and why?

Moody: This is the type of series in which role players could make a huge impact and one name that comes to mind is Andrew Wiggins (+3500). Wiggins has finally realized his potential with the Warriors and can cement his legacy by winning a championship. He should have a great series.

Snellings: I consider Jayson Tatum to be the chalk pick; however, judging from the pre-series buzz, I could see a groundswell push for Marcus Smart (+3500) to take it if he’s able to limit Stephen Curry and make some memorable shots in the series. The Smart/Curry matchup will be under the microscope as Smart is the emotional leader of the Celtics and he isn’t afraid to shoot. If a couple of those looks go in I could see a case for Smart as the X factor who deserves the Finals MVP award.

Fortenbaugh: Tatum at +180. He’s the best player on the team I’m picking to win the series. Although Jaylen Brown at 10-1 is also worth a look.

Marks: I have the Warriors winning the series. Home-court advantage will be huge in this series, considering Golden State has not lost at Chase Center this postseason, and I don’t see that changing anytime soon. Kevin Durant is no longer on this roster, and Curry is the straw that stirs the drink. He is deserving on so many levels. If the Warriors win, Curry wins the Finals MVP.

Fulghum: Betting the favorites is no fun. I want a nice return on my investment. That’s why I encourage you to consider Marcus Smart at 35-1. Think about the narrative that can be created if Boston wins this series on the strength of its dominant defense with Smart limiting the efficiency of Stephen Curry and/or Klay Thompson. Smart is also someone capable of having some spike scoring games because he is not afraid to shoot the basketball. If he’s knocking down his 3s and playing his usual defense on Steph, at 35-1 he provides tremendous value for bettors.

Which matchups/players offer the best value for game-by-game props?

Moody: I’ll be paying close attention to the matchup between Stephen Curry and Marcus Smart. Since Steve Kerr arrived in 2015, 112 defenders have faced Curry in at least 100 matches. When Smart guards Curry, the Warriors’ offensive efficiency is 85, the second worst among all those defenders. Secondary scorers on Golden State such as Thompson, Poole, and Wiggins will benefit from this.

Snellings: I like Jayson Tatum (and to a lesser extent Jaylen Brown) on the glass. The Warriors play a good deal of small ball, and even when they go traditional they rely heavily upon Kevon Looney to vacuum in the boards. The Celtics typically go with two bigs, so they’ll have one to bang with Looney and the other to shadow Draymond Green on the perimeter. This leaves Tatum, at roughly 6-foot-9 with a 6-foot-11 wingspan, to contend with smaller Warriors for rebounds in space. Tatum averaged 10.0 RPG against the Warriors this season, and has 39 boards in four games against them over the past two seasons. Tatum’s rebounding prop for Game 1 is 7.5 and he has a good chance to top that mark regularly in this series.

Dolan: The Warriors players’ made 3s will be worth a look each game. The Celtics protect the rim better than any team that Golden State has faced this postseason, which will force the Warriors to pay more attention to their 3-pointers. They have averaged 13.8 made 3s and shot 37.9% from deep this postseason. This series could come down to who shoots better with two stout defenses.

Fortenbaugh: My first thought is to fade Marcus Smart’s scoring prop. With everything he’ll be asked to do in regard to defending Curry, I’m not so sure he’s going to play a large role in Boston’s scoring endeavors this series.

Fulghum: I like Curry as a playmaker. His assist prop for Game 1 is just 5.5. He had no less than 8 assists in each of the last three games of the Western Conference finals. If Marcus Smart is hounding him on-ball, he could become more of a facilitator for his teammates who have easier defensive matchups.

Who do you see winning the series and why?

Moody: The Warriors are 9-0 at home this postseason and are relatively healthy compared to the Celtics. Boston hasn’t faced an offensive juggernaut like the Warriors yet and Golden State has multiple players with significant Finals experience. The Warriors will need to limit their turnovers, outperform the Celtics from beyond the arc, and be aggressive on the offensive glass to beat Boston. I think they will be able to accomplish these tasks and hoist the Larry O’Brien Trophy.

Snellings: I think the Celtics present more matchup problems for the Warriors than vice versa. The Warriors have trouble with teams that can be physical with them and dominate the interior. The Celtics are big, physical and have a dynamic offense with healthy superstars to push the Warriors on the other end. Golden State’s defensive strengths are in their frontcourt, meaning Tatum and Brown should be able to create more off the dribble without a large risk of turnovers. The Celtics are also the best road team in the NBA, fresh off winning three road games in the conference finals. Golden State has a vast experience edge, which can’t be overlooked, but this matchup seems to favor the Celtics overall.

Fortenbaugh: The Warriors are an astounding 21-2 in Game 1s under Steve Kerr. Now, compare that with a Boston squad that is coming off a grueling seven-game series against the Heat and traveling to the West Coast with a history of struggling in Game 1s. The Celtics started off in a 1-0 hole against both Miami and Milwaukee and needed a Jayson Tatum buzzer-beater to survive Game 1 against the Nets. After the Warriors handle their business in Game 1, I’ll be jumping on Boston at the adjusted series price.

Marks: I see the Warriors winning in six games. This will be the first time the Warriors will host an NBA Finals series at Chase Center. No way Golden State loses on its home court.

Fulghum: I will be taking the same approach as Joe. Betting the Warriors to win Game 1, then hopping on the Celtics to win the series overall at a much better price for my money. Whether it is Game 2, 5 or 7, I think the Celtics can steal one close victory on the road with an A-game (or a sloppy Warriors game), and take care of business back in Boston to win this series.