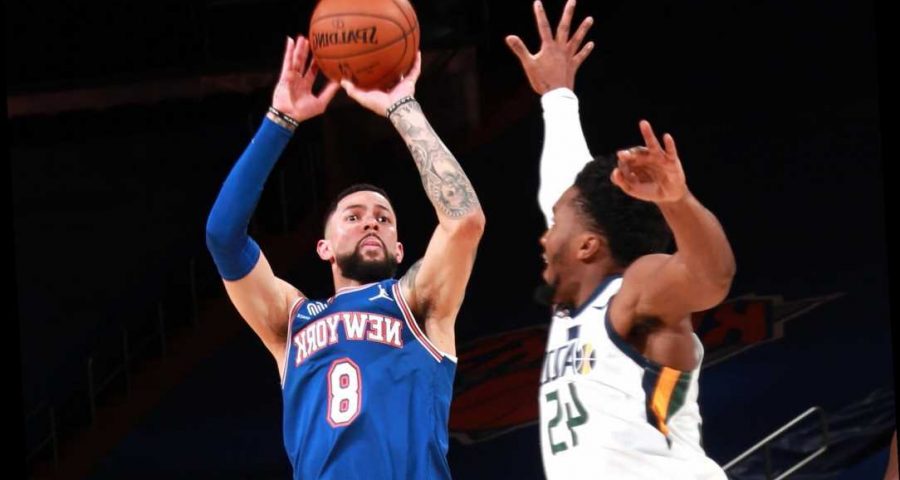 Austin Rivers has never seen anything like Knicks rookie

Tom Thibodeau’s effect on Knicks has been drastic

No lead is safe against these Knicks. And Rivers.

Two days after rallying from 15 points down, the Knicks roared back from an 18-point hole to wipe out the Jazz, more late fourth-quarter magic from Rivers, their new standout closer.

Doc Rivers’ clutch son scored 14 straight points down the stretch that included four straight 3-pointers and a floater with the shot clock winding down as the Knicks moved to 5-3 after winning their fifth game in six outings. It’s their best record after eight games since the magical 2012-13 season.

Rivers finished with 23 points on 9 of 14 shooting. Rivers has been key in the fourth quarters of the last three games after missing all preseason and the season’s first five games with a groin pull.

Thibdodeau said he watched Rivers grow up, as an assistant coach under Doc Rivers when Austin was in high school. So this insane spree isn’t shocking Thibodeau.

Thibodeau recalled Rivers would attend Celtics practice – a club with a couple of Hall-of-Fame guys.

“He wanted to play them one-on-one, including Kevin Garnett,’’ Thibodeau said. “Rivers wanted to play (Kevin). Austin really thought he could beat him.’’

Julius Randle got off to a very slow start before leading the charge and logging another 39 minutes with the Knicks decimated up front. Randle registered 30 points, 16 rebounds and seven assists.

The Knicks also got a huge performance from starting shooting guard Reggie Bullock, a game-time decision with a sore knee. Bullock registered 12 points, hitting 5 of 8 shots. Point guard Elfrid Payton got into the paint and added 22 points and six assists.

A 34-19, turnover-free third quarter brought the Knicks back from their lethargic start as they took a 78-75 lead after three quarters in rallying all the way back from an 18-point hole.

To end the third quarter, the Knicks made two sterling defensive plays leading to transition hoops. Kevin Knox registered a rare block, leading to Payton fast-break layup to give the Knicks their first lead since early in the first quarter.

Then Rivers started his great night. He knocked the ball away from Utah’s Joe Ingles, springing Barrett for a breakaway dunk in the quarter’s final seconds to give the Knicks a 78-75 lead after three, capping an 8-0 run.

Payton began the fourth quarter by draining a 3-pointer to put the Knicks up by five points and extend the run to 10-0. A Mitchell Robinson dunk put the run at 12-0 and gave the Knicks an 82-75 lead that Rivers more than protected.

The Knicks fell behind by 18 points in the second quarter. Randle and RJ Barrett, who are first and second in the league, respectively, in minutes played, looked weary off the 3-1 road trip. Utah led 56-44 by intermission and Barrett went 0 of 6 in the first half.

It was all forgotten at the end.