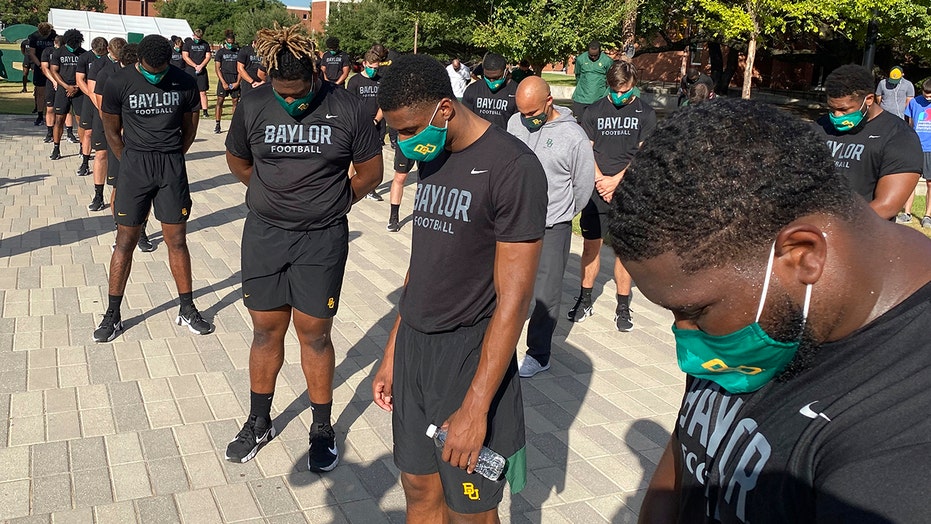 Football practice was canceled at Boston College, Kentucky, South Florida, and other schools Thursday, joint decisions made by coaches and players and inspired by NBA players protesting racial injustice.

Baylor players decided to forgo practice to unite around the ongoing events in the country, marching from the athletic complex to Fountain Mall in the heart of the campus in Waco, Texas, to pray.

BC coach Jeff Hafley said instead of hitting the field, the team held meetings to discuss racism in the United States, first as a whole and then in smaller groups.

Some players shared stories about how racism affected them or their families, “how scared they are sometimes, and how emotional they are right now,” said Hafley, who is in his first season as Eagles head coach.

At South Florida, another first-year coach called off practice.

The NBA called off its entire schedule Wednesday and Thursday after the Milwaukee Bucks decided not to take the court for a playoff game against the Orlando Magic to protest the police shooting of Jacob Blake in Kenosha, Wisconsin. Blake, who is black, was shot seven times in the back when he leaned into his car. Other sports followed.

The college football season for many teams is still several weeks away, but still the movement spilled onto campuses across the country.

At Baylor, which has first-year coach Dave Aranda, the Big 12 school said in a statement that the team used its practice time to instead have “an open conversation about how to come together as one to unite against social injustice, to discuss practical ways to support hurting teammates, and to take time to pray for God to use the team to create change.”

At Kentucky, players went to the practice field, and then left.

Paschal said when the players met, a teammate shared a story of family member who had been shot during a traffic stop by the police.

“We know there is an issue with this country and we’re willing to fight for that,” said Paschal, who is Black. "And even though we have teammates that may not look like us, we know that they have our back, too, because, we’re just all a family right here.”

Fortner, who is white, said the players wanted to do more than just tweet hashtags.

“We’re planning on continuing our volunteer service, but with an emphasis on youth and minorities in the community,” Fortner said. "We plan on opening dialogue with the Lexington police and inviting an open conversation. We plan on making this a consistent effort, not something that dies down in just a week.”

Paschal said he hopes fans respect the players for standing up for what they believe, even if they don't totally agree.

“I feel like this is a human rights issue,” he said. "This is not a political issue or anything like that. I believe that we should all be united in this fight against police brutality and we should all be for it, not half and half or not against us.”

At Western Kentucky, coach Tyson Helton said he called off practice after meeting with players and coaches to discuss current events.

Earlier this summer, college football players and coaches all over the country were notable participants in rallies and marches to protest the death of George Floyd, a Black man who was being detained by police in Minneapolis.

The shooting of Blake has sparked a new round of protests and demonstrations.

“And I do believe we had some really great conversations today because things do need to change. There is too much hate and there needs to be more love and it’s sad,” Hafley said. “And I’m very very proud of our football team today.”