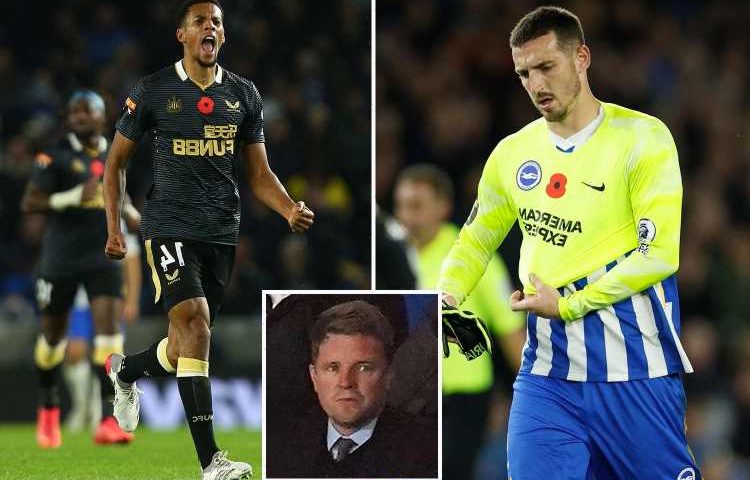 IT IS a curious old job Eddie Howe has inherited.

He is the new manager of the wealthiest club on Earth and of the only club in English professional football without a win this season. 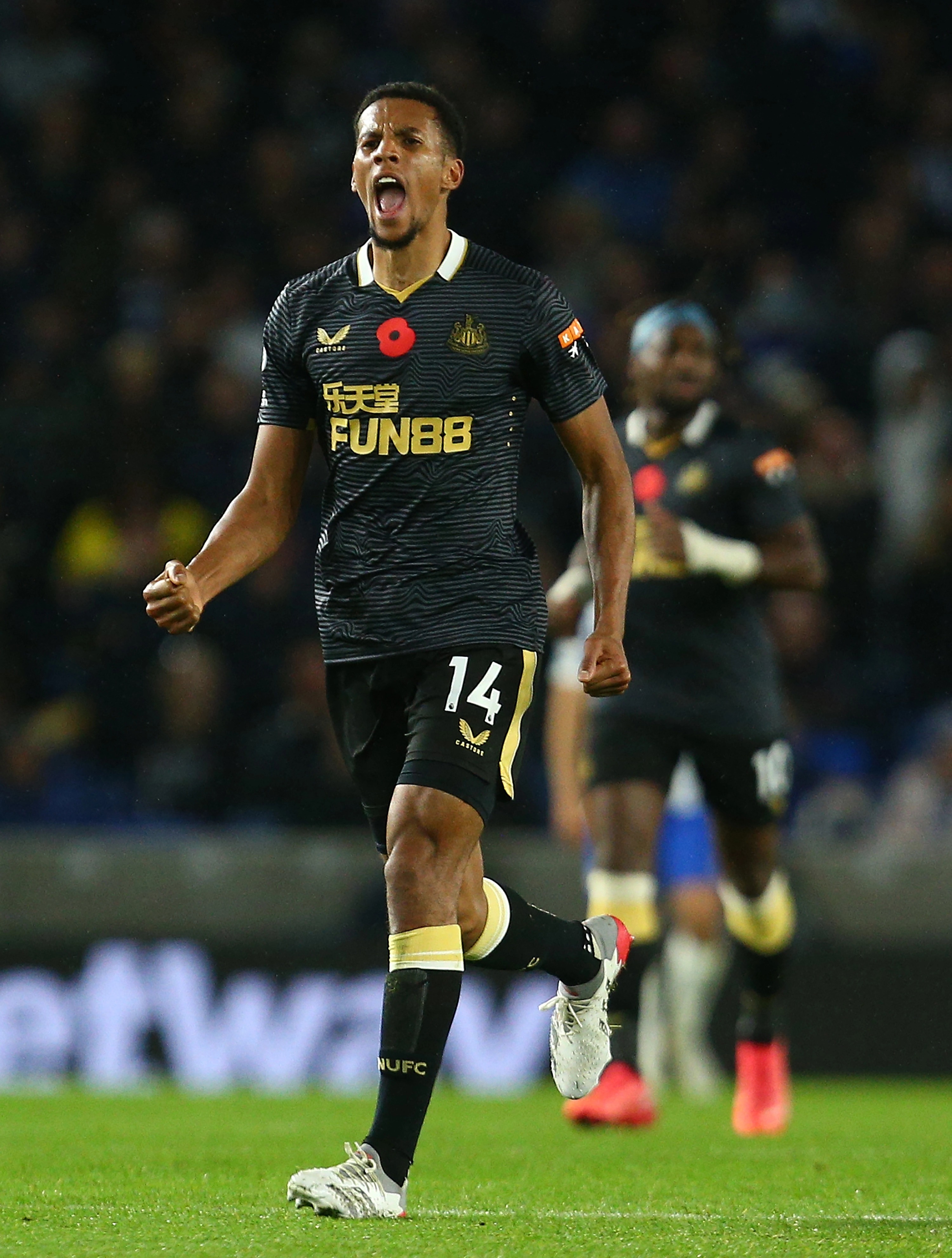 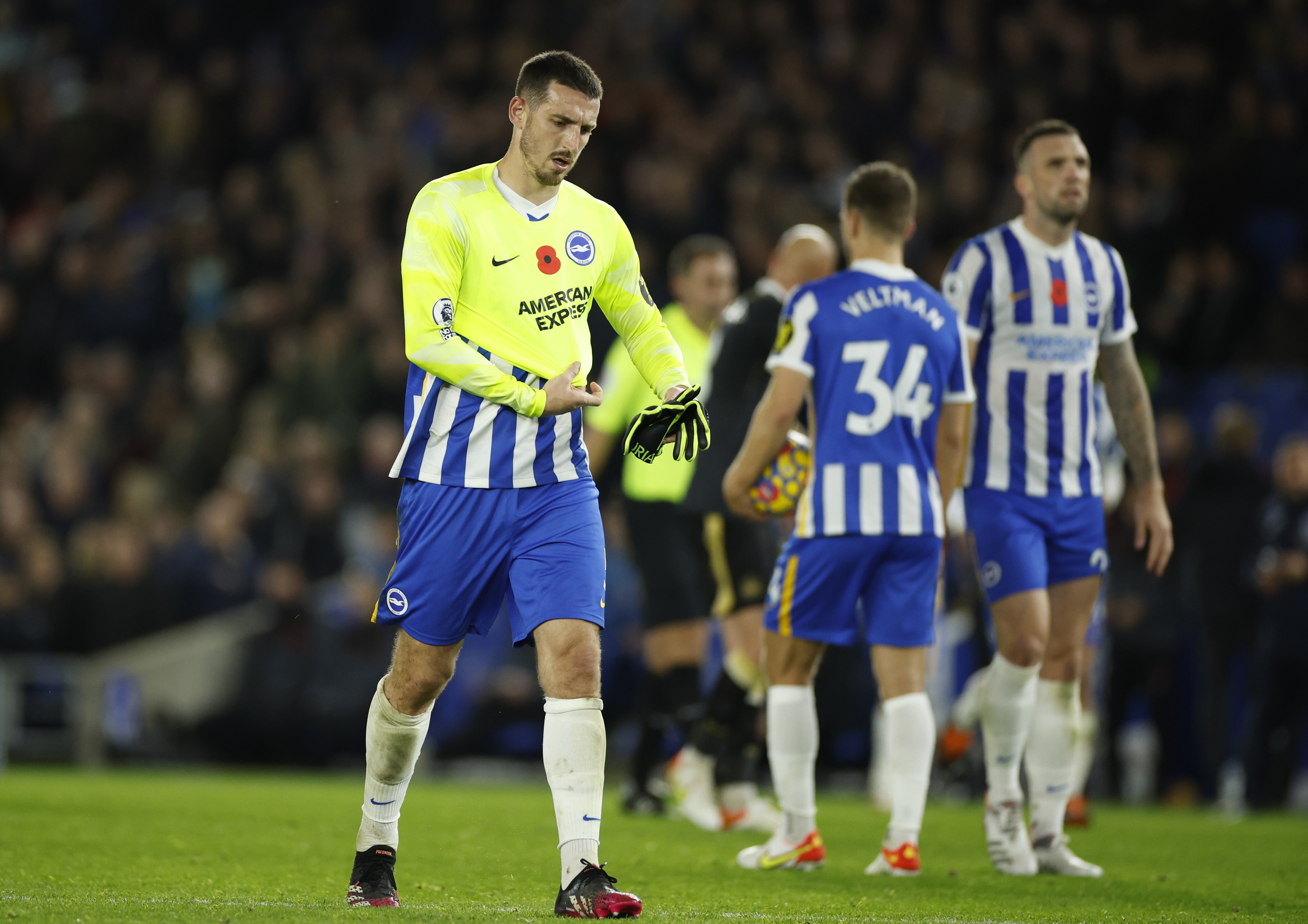 Even in the build-up to this match, it was suggested that Howe – infamous for his reluctance to accept job offers during and after his reign at Bournemouth – might pull out of a deal to succeed Steve Bruce at Newcastle.

Yet Howe and his assistant Jason Tindall were sitting next to Geordie Arabia’s figurehead Amanda Staveley in the Amex Stadium directors box, with a contract agreed and a deal set to be announced.

And when Isaac Hayden rescued an unlikely point to lift Newcastle off the bottom of the Premier League table, Howe was beaming widely.

It might have been even better news for the in-coming boss when Brighton keeper Robert Sanchez was sent off in injury-time, with Lewis Dunk forced into goal for eight minutes of injury-time.

Typically, though, Newcastle were unable to test the stand-in keeper, who did not have to touch the ball once he had taken Sanchez’s shirt.

And they ended up with an unwanted club record of an 11-match winless start to a season.

It has been a chaotic start for Staveley and her Saudi overlords – not short of embarrassment on or off the pitch.

But in Howe, Newcastle have landed a very decent manager, with one footballing miracle already on his CV.

Back in 2011, Howe saved Bournemouth from relegation from the Football League despite a 17-point deduction and then led from the basement division to the Premier League.

It would not exactly be miraculous to save Newcastle from the drop this season – especially as they will surely invest heavily in the January window.

But until the market opens, and the cavalry arrives, every point is precious for a team which currently looks like absolute relegation fodder.

Upcoming home matches against Brentford, Norwich and Burnley will go a long way to deciding whether Newcastle are in a bleak or a hopeful position by the team the Saudis can start spraying the cash about.

Brighton were the better team for the majority of this match but they could only manage a controversial Leandro Trossard penalty and were made to pay for their inability to turn dominance into clear-cut chances.

Graham Potter – who is what Howe was a few years ago, the next big thing in English football management – has done a fine job on the south coast but there have been too many matches like this when Brighton have lacked the killer touch.

In midweek, it had seemed certain that Unai Emery would be in the visitors’ dugout for this match but the Villarreal boss got spooked by the lack of professionalism from the new St James’ Park regime and opted to remain in Spain.

So it was back to Howe, pictured alongside Staveley before kick-off, having just heard that Norwich’s win at Brentford had sent his new club rock-bottom.

Howe did witness a bright start, one sharp break ending with Miguel Almiron angling a pass for Jacob Murphy, who dragged a shot wide.

Brighton barely threatened before their fortuitous opener midway through the first half.

From a corner, Trossard appeared to be looking for a penalty, going down too easily after a slight tug of the shirt and a nibble of the boot from Ciaran Clark.

Ref David Coote was not interested at first glance but, like so many, it was one of those incidents which look far more incriminating in slow motion.

So when Coote was sent to the touchline monitor by his VAR Craig Pawson, he did the old Lionel Blair tribute TV gesture and pointed to the spot.

Trossard, who had scored in last week’s draw at Liverpool, went straight down the middle to beat Karl Darlow. 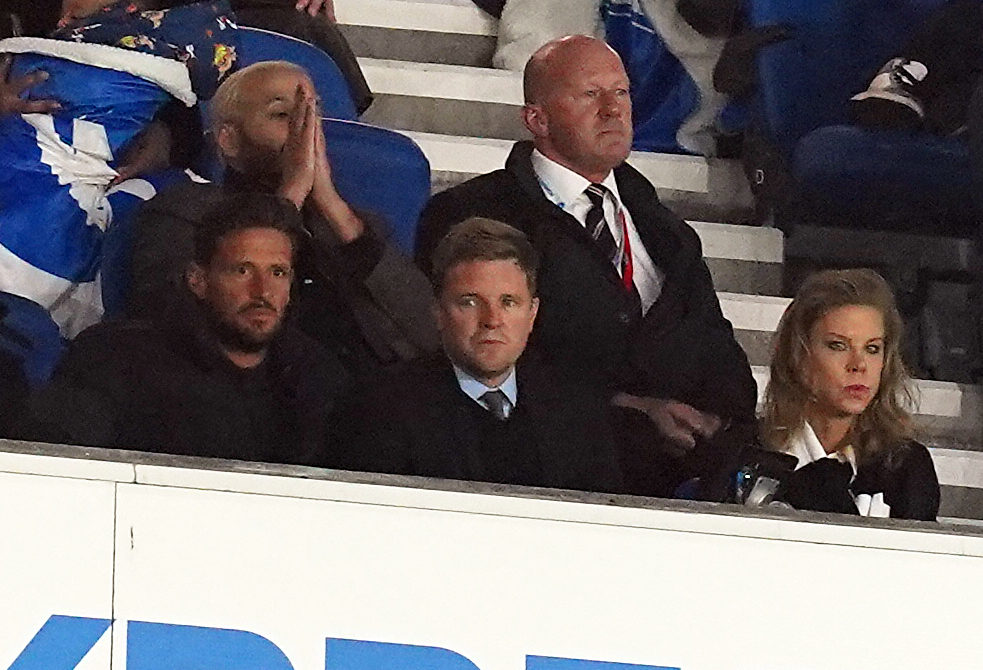 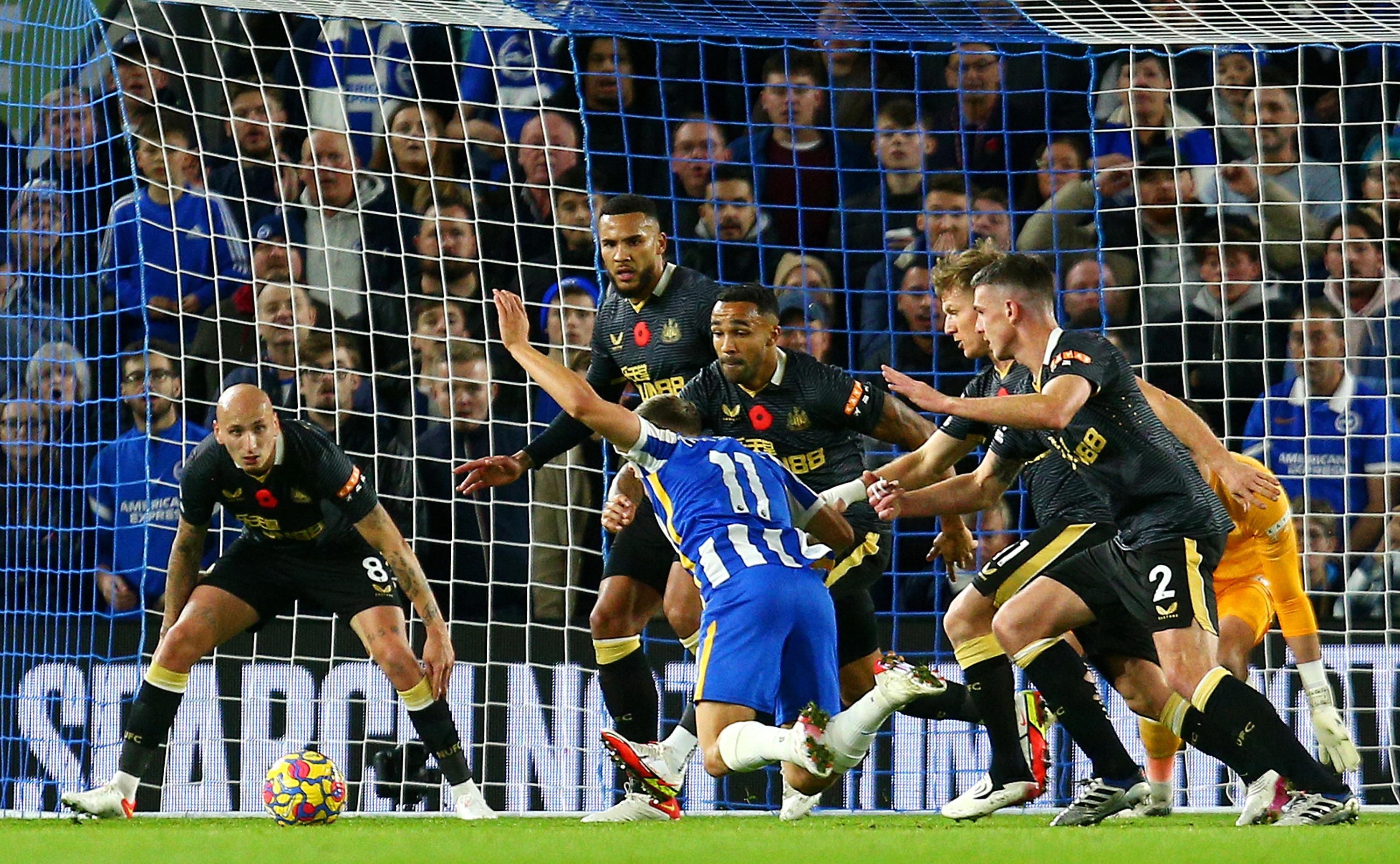 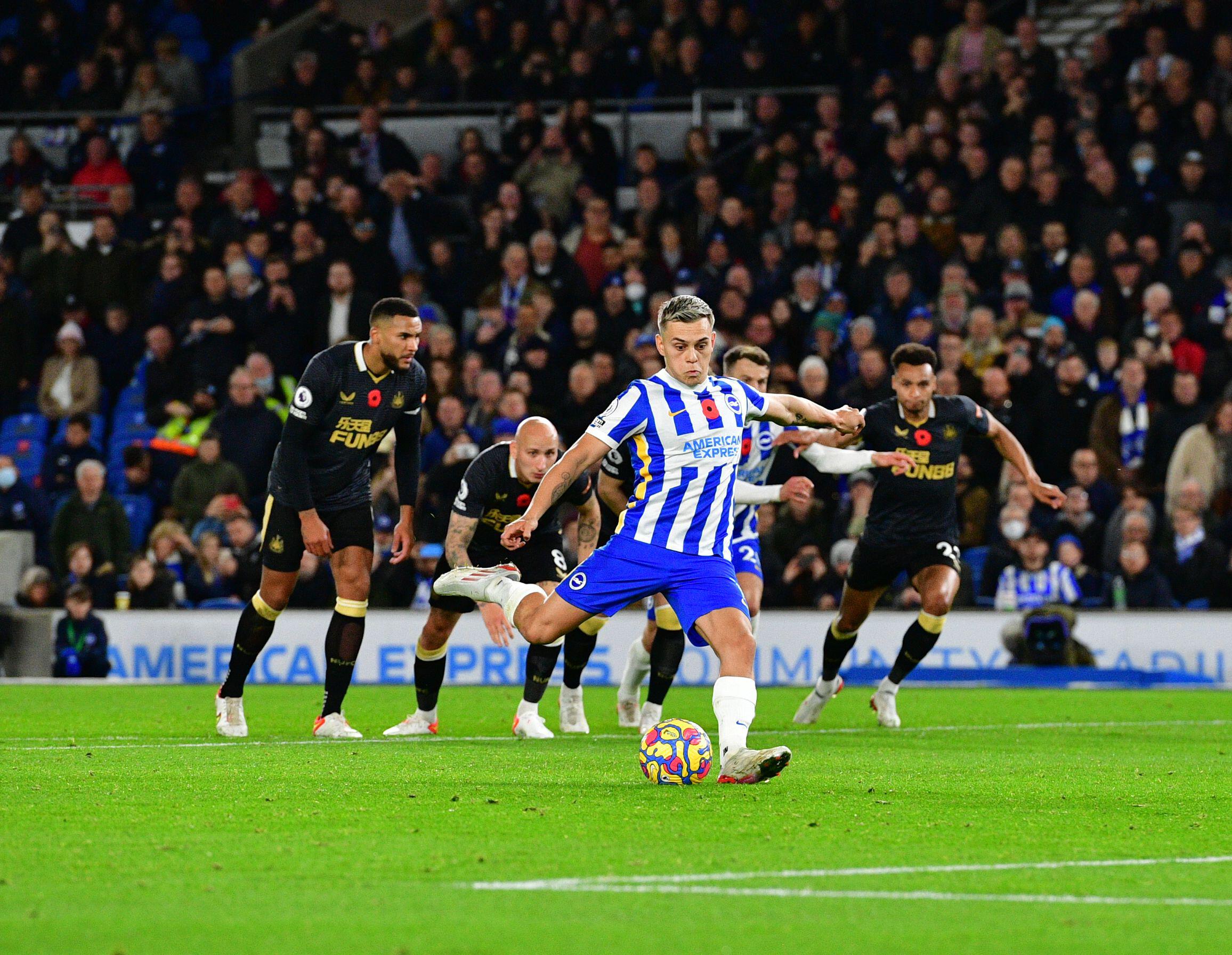 It was harsh on Newcastle but it lifted the Seagulls and Joel Veltman soon flashed a centre across the face of goal, with Tariq Lamptey and Trossard diving in but neither getting a touch.

The travelling Toon Army were soon getting restless, urging ‘attack, attack, attack!’ but their heroes were unable to oblige.

Adam Lallana was making things tick in the Brighton midfield and the superior teamwork of Potter’s men was beginning to show.

Potter sent on Alexis Mac Allister in place of Enock Mwepu at the break and Lallana was soon releasing Trossard for a shot which was saved at the near post by Darlow.

Trossard then picked out Marc Cucurella, who headed wide across the face of goal.

Then the best move of the match – an Ederson-esque pass from Brighton keeper Sanchez, a gorgeous take-down from Cucurella and Trossard cutting back for Lallana to shoot narrowly wide.

But Brighton failed to capitalise on their dominance and, pretty much out of the blue, Newcastle were level midway through the second half.

Then the late drama as Sanchez raced out of his goal and clipped Callum Wilson’s heel – the VAR again sending Coote to his monitor before he delivered the red card. 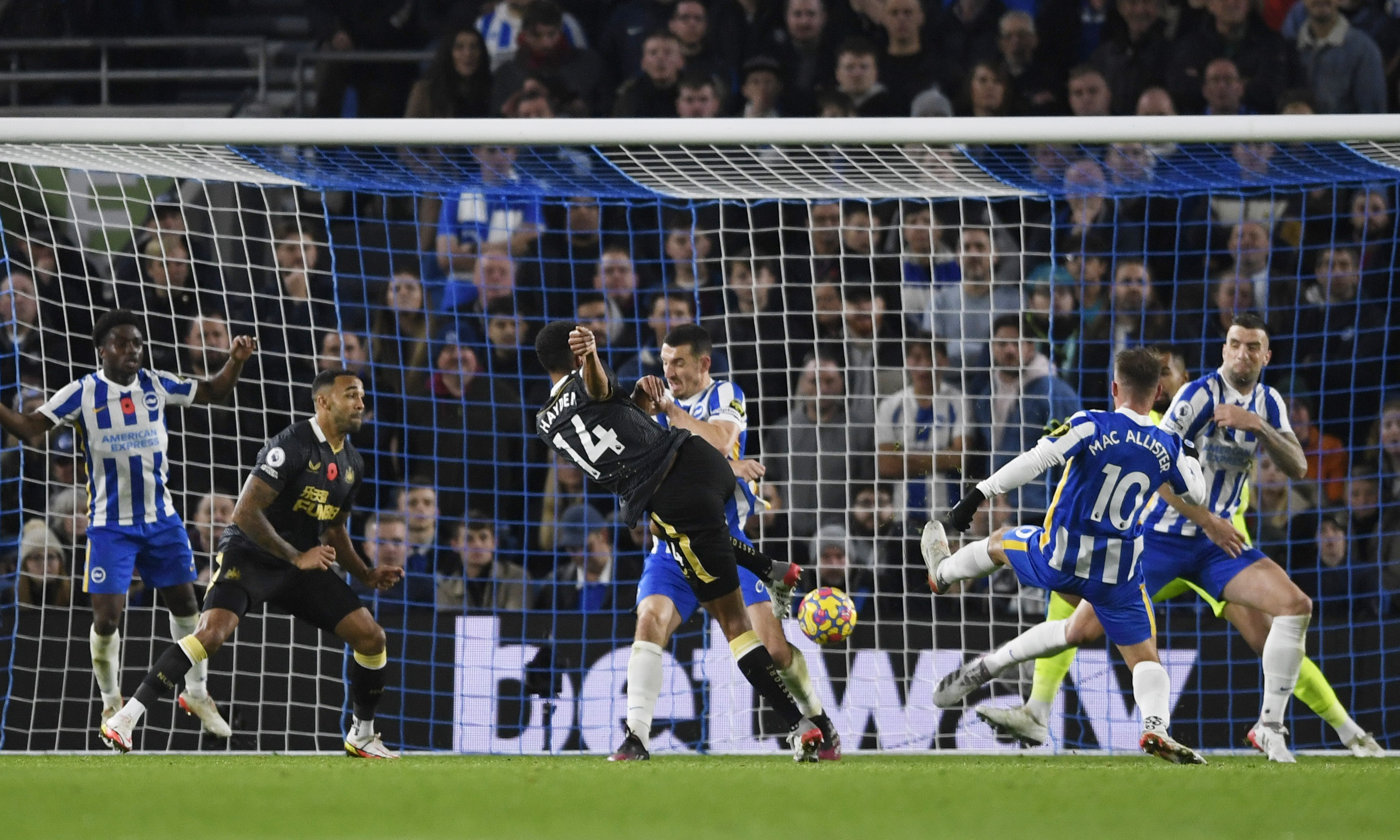 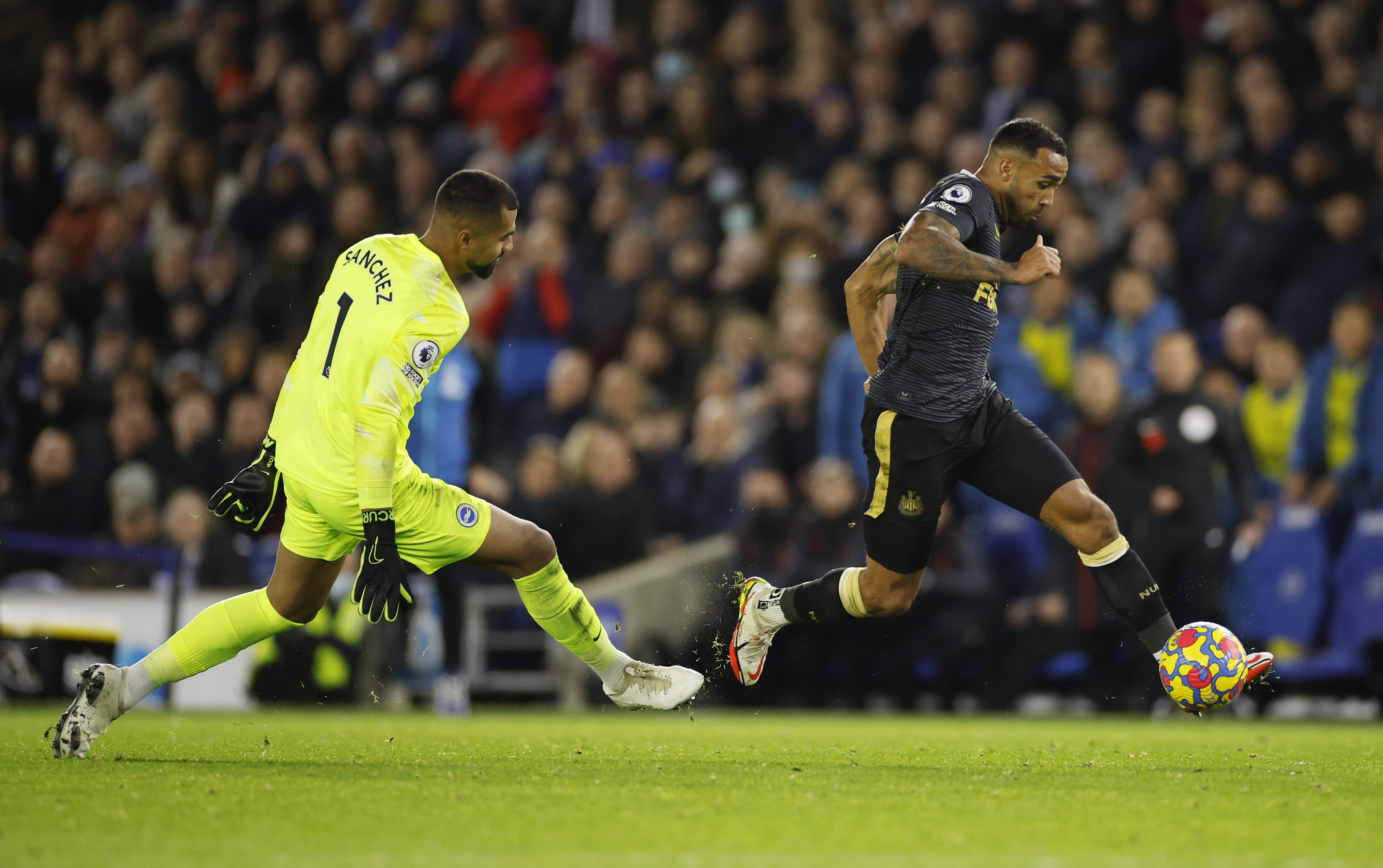 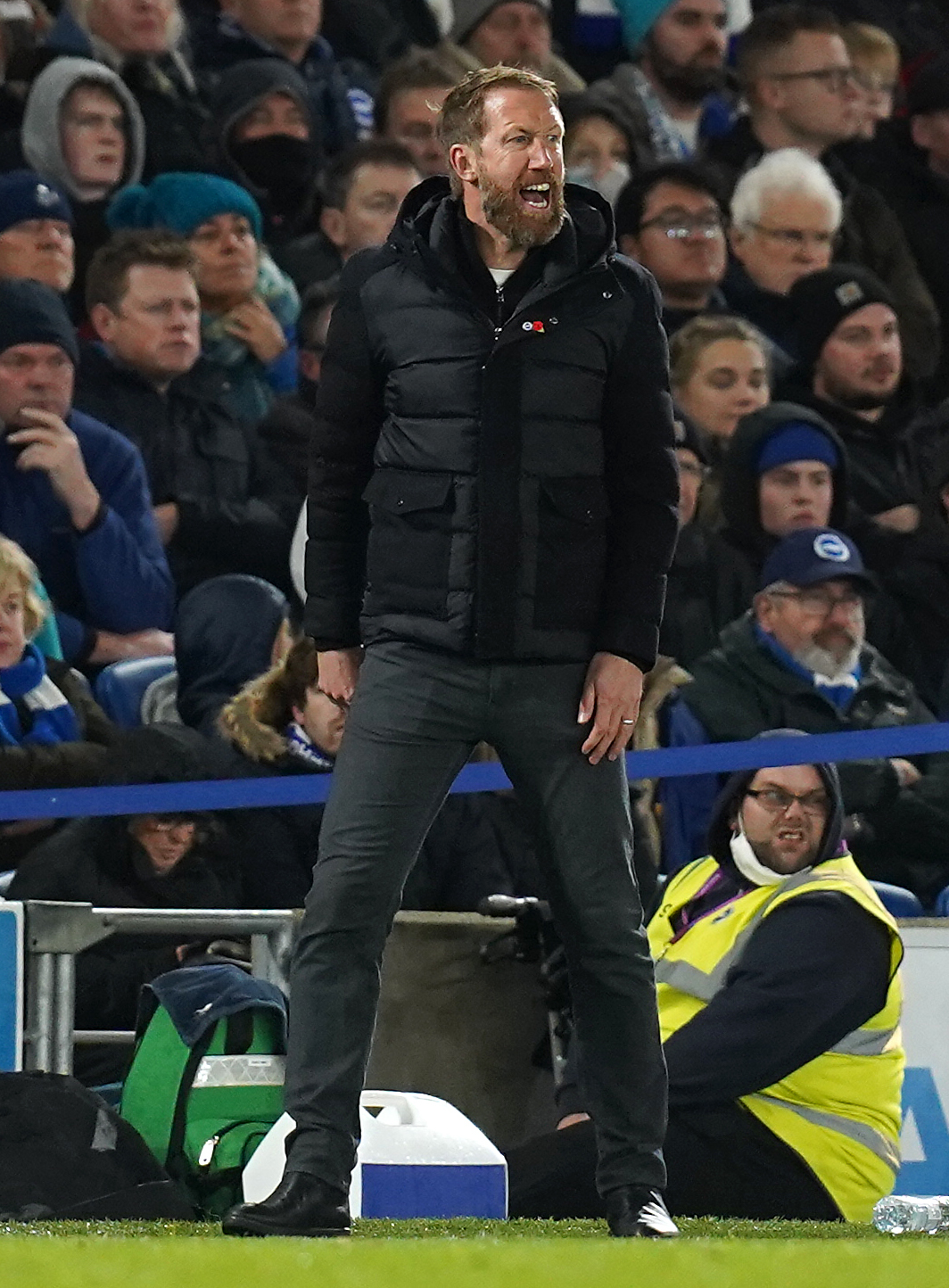