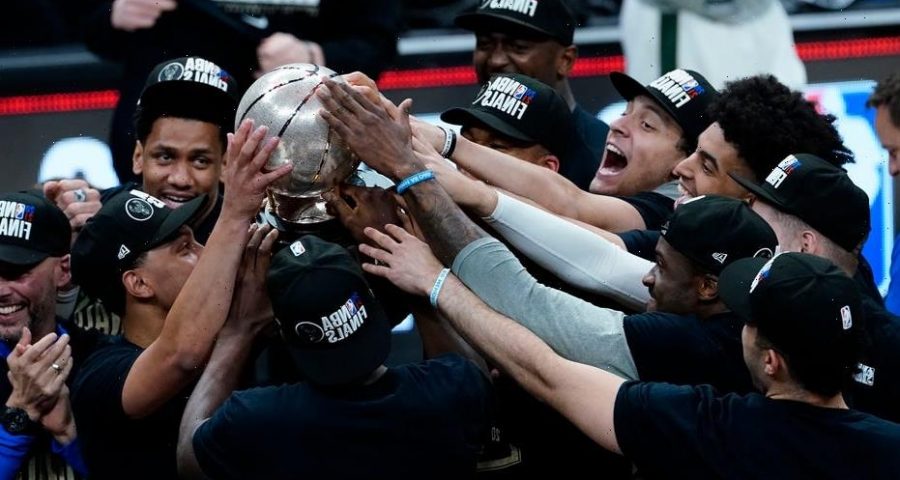 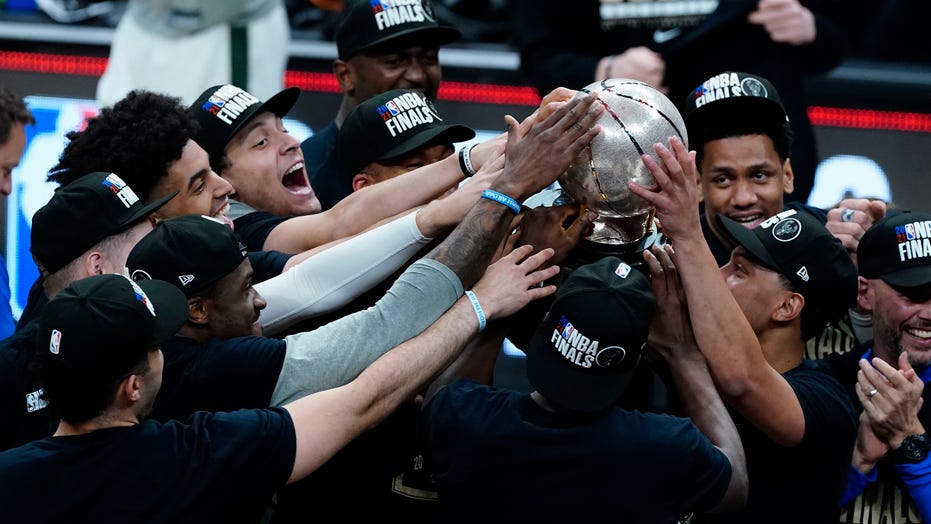 The Milwaukee Bucks were an instant success in the NBA, winning a championship in just their third season and reaching the finals again three years later.

Nearly a half-century later, they finally have a shot at another title.

Khris Middleton scored 32 points, including a run of 16 straight in a decisive third quarter that carried the Bucks to a 118-107 victory over the upstart Atlanta Hawks in Game 6 of the Eastern Conference finals Saturday night.

Milwaukee won the series 4-2, advancing to the NBA Finals for the first time since 1974. Game 1 against the West champion Suns is Tuesday night in Phoenix.

The Bucks didn’t even need Giannis Antetokounmpo to lock up their spot. The two-time MVP missed his second straight game with a knee injury, but Middleton & Co. had his back.

Antetokounmpo cheered them on from the bench.

“One of the biggest things we did the last two games was play for him,” said Pat Connaughton, who had 13 points and eight rebounds. “We do have a true team.”

Trae Young returned to the Hawks lineup after missing two games with a bone bruise in his right foot, but the young star never got anything going. After both teams struggled to find the range in the first half, the Bucks suddenly couldn’t miss in the third quarter.

Atlanta actually had a chance for its first lead of the game when Young’s behind-the-back pass gave Kevin Huerter an open look from 3-point range.

The shot rimmed out, and Middleton quickly ripped off the next 13 points to suddenly push Milwaukee’s edge to 60-45.

Young broke up the one-man onslaught with a driving basket, but Middleton responded with a 3-pointer that gave him 16 straight Milwaukee points.

Middleton finished the quarter with 23 points, nearly outscoring the Hawks all by himself. Atlanta had 29 points in the period as Milwaukee headed to the final quarter with a commanding 91-72 lead.

“My teammates and my coaches, they told me to keep being aggressive,” Middleton said. “I love it. Each one of these guys, they work every single day. Everybody stays ready. Everybody stays locked in. We all play for each other. And that’s all you can ask for.”

Cam Reddish, who missed much of the season with an Achilles injury, came off the bench to spark the Hawks. He scored 21 points — making six of seven 3-pointers — as the Hawks sliced a 22-point deficit down to six in the closing minutes.

“The message was, ‘No regrets. We don’t want any regrets. …. Empty the tank,'” said Nate McMillan, the Hawks interim coach. “And they did.”

But the Bucks finished it off, rekindling memories of the franchise’s early years when Milwaukee quickly became the center of the NBA world with a team led by two of the game’s greatest players, Kareem Abdul-Jabbar and Oscar Robertson.

The duo led the team to its only NBA title in 1971. The Bucks returned to finals in ’74, only to lose to the Boston Celtics in seven games.

Robertson retired after that season and Abdul-Jabbar was dealt a year later to the Los Angeles Lakers, ending Milwaukee’s run as a glamour franchise.

Now, the Bucks are back in the finals with a whole new group of stars. As they proved in the last two games against the Hawks, they’re certainly more than the Greek Freak.

With Antetokounmpo sidelined by a hyperextended left knee, the Bucks turned to his supporting cast to finish off Atlanta. Brook Lopez had 33 points in Game 5, and three other starters scored at least 22.

Middleton and Holiday carried the load in the deciding game.

“These guys have put the work in all year. They deserve to go to the finals,” said Milwaukee coach Mike Budenholzer, who previously coached the Hawks. “We’ve got more work to do.”

Despite a disappointing finish, the Hawks stamped themselves as a future force with a young group that knocked off the New York Knicks and the top-seeded Philadelphia 76ers to surprisingly advance to the conference finals.

Mired at 14-20 when they fired coach Lloyd Pierce shortly before the All-Star break, Atlanta went on a run under McMillan that carried the Hawks to the playoffs for the first time since 2017.

They didn’t stop there, advancing to the conference finals for only the second time with Young leading the way.

“We all understand this is just beginning,” Young said. “It was fun to have this city excited. We want to keep it like that.”

After missing Games 4 and 5 with a bone bruise in his right foot, Young was cleared to play shortly before tipoff Saturday night. The crowd went nuts when the charismatic point guard was the introduced as the final member of the starting five.

But, clearly, he wasn’t all the way back.

After a nearly week-long layoff, Young seemed tentative and out of sorts. Sure, he flashed a bit of his old form on a couple of bursts to the basket, but 14 points on 4-of-17 shooting was not at all what the Hawks had come to expect from their breakout star.

“I just wanted to battle and try to fight through it as much as I could, try to be out there for my team,” Young said. “But it was definitely frustrating not being healthy and not being able to give my full 100%.”

Bucks: With the Hawks focused on doing a better job in the lane, Lopez was held to 13 points. … Bobby Portis had 12 points and nine rebounds in his second straight start for Antetokounmpo. … Jeff Teague, who played for the Hawks when they reached the conference final in 2015, scored 11 points in just over 12 minutes of playing time off Milwaukee’s bench.

Hawks: Huerter, the surprising star of Atlanta’s Game 7 win over Philadelphia, closed the season with only five points on 2-of-10 shooting. … Bogdan Bogdanovic scored 20 points. … Atlanta finished 38 of 92 (41.3%) from the field.

Neither team seemed capable of winning in the first half.

Appropriately, the half ended with Atlanta’s Clint Capela missing right under the basket off a lob pass from Bogdanovic, sending the Bucks to the locker room with a 47-43 lead.

PLAYING WITH THE LEAD

Amazingly, there were no lead changes over the final three games of the series.

The Hawks never trailed in Game 4, romping to a 110-88 victory. Milwaukee returned the favor in Game 5, building a 20-point lead in the first quarter and staying out front all the way in a 123-112 triumph.

It was more of the same in the deciding game, which the Bucks led from start to finish.