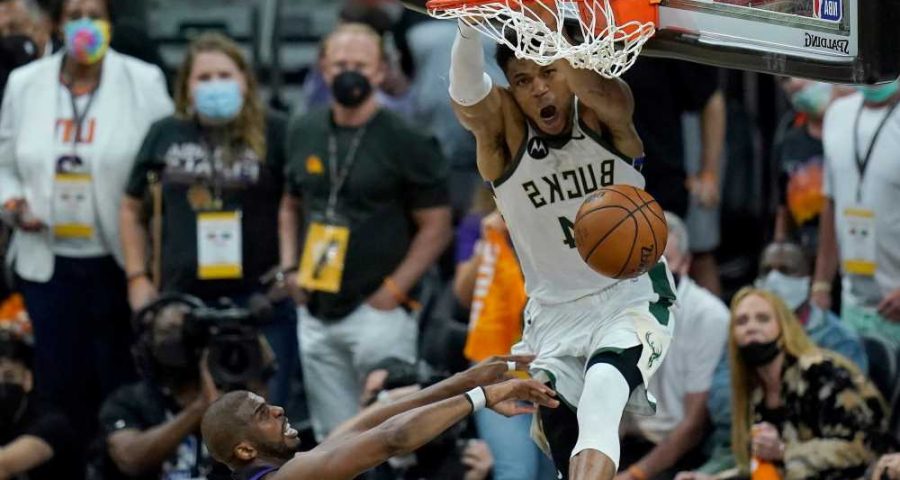 Why Greek Freak was so impressed by his ‘incredible’ block

It is now undeniably the Bucks’ Big 3, and they are one victory in Milwaukee away from the franchise’s first NBA championship since 1971.

Giannis Antetokounmpo, Jrue Holiday and Khris Middleton were brilliant in Phoenix on Saturday night in Game 5 of the NBA Finals. The Bucks held off a crazed Suns comeback in the final minute and posted their third straight victory, 123-119, in a thriller at the newly named Footprint Center to take a 3-2 lead in the series.

Milwaukee’s star trio combined for 88 points, but needed a key defensive play by Holiday to seal it.

Holiday, who shot just 4-for-20 in Game 4 despite stellar defense, was spectacular on both ends Saturday, striking for 27 points and 13 assists. Holiday, whose offense has come and gone during the playoffs, had his finest hour and it couldn’t have come at a more gargantuan time.

With Suns superstar Devin Booker stopped on a drive, Holiday ripped the ball from him and sent an alley-oop pass to Antetokounmpo for the slam with 20 seconds left. The Greek Freak also was fouled, but Antetokounmpo back-tapped it after missing the free throw. That gave the Bucks possession and clinched it after the Suns had almost rallied back from a 14-point deficit in the fourth quarter.

“One more to go,’’ Antetokounmpo said.

Antetokounmpo delivered clutch passes all night and scored just enough, finishing with 32 points, six assists and nine rebounds. Middleton, after a 1-for-7 start, heated up and finished with 29 points.

Booker did all he could, pumping in 40 points. He has scored a combined 82 in the last two losses, while Phoenix point guard Chris Paul was more than serviceable, with 21 points and 11 assists.

The Bucks, who rallied from a 16-point, first-quarter deficit, can win the NBA championship Tuesday night in Milwaukee’s Fiserve Forum. The Bucks could become just the fifth team to rally from an 0-2 hole to win the Finals. They came back from the same deficit against the Nets, winning Game 7 of their second-round series in overtime.

Milwaukee also got another bench boost from Pat Connaughton. The Notre Dame product, who has blown up in the last few games, went 4-for-6 on 3-pointers and finished with 14 points, while grabbing a couple of key offensive rebounds.

The Bucks took a punch, falling behind 37-21 after one quarter before getting off the mat and taking a 64-61 lead at halftime.

The tale of two quarters saw the Bucks overwhelm the Suns 43-24 in the second period as both squads displayed offensive brilliance in the first half.

Ex-Knick Bobby Portis, who didn’t play in the final three games of the Nets series, was glorious for the Bucks, hitting 3-pointers and grabbing an offensive rebound against Suns center Deandre Ayton. He laid it in, got fouled and flexed his muscles.

Holiday was sensational after horrible shooting in Game 4. A defensive demon, Holiday sank 14 of his 18 first-half points in the second quarter. He also had seven assists while shooting 8-for-11 from the field (2-for-3 from 3) in the quarter.

The Bucks scored another 36 points in the third quarter to take a 100-90 lead into the final period. Holiday added another defensive highlight, stealing the ball from Booker then coming down and hitting a 3-pointer for 83-75 lead. On the next possession, Antetokounmpo scored after his lane jumper hit the back iron and still dropped through for a 10-point lead. The ball was indeed rolling the Bucks’ way after recent years of bad playoff luck.

This all came after the Suns and Booker came out scorching to build a 16-point lead. Booker had 11 points in the period, canning jumpers and backed in his defenders for hoops.

It was quite the frenzy for the young Suns superstar, who had 42 points in the Game 4 loss. He finished with 18 points and seven assists by halftime — the only other player to post numbers that high in a Finals game by intermission was LeBron James.

During the massive Suns’ run, Jae Crowder made a hustle play in batting back an offensive rebound right into the hands of Mikal Bridges, who settled behind the 3-point line and rained the trey for a 16-point bulge. Paul had nine points, six assists and no turnovers at intermission with his Banana Boat buddy, James, in the front row.