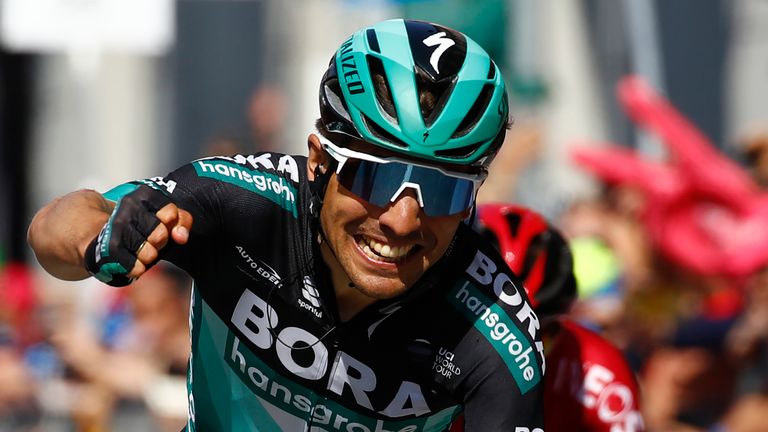 Cesare Benedetti claimed a popular first professional win with victory on stage 12 of the Giro d’Italia, as Valerio Conti passed the leader’s pink jersey to his team-mate Jan Polanc on Thursday.

Bora-Hansgrohe’s Benedetti and Irishman Eddie Dunbar of Team Ineos were among five riders to reach the finish line in Pinerolo together, the last survivors of a 25-man group who had gone up the road almost as soon as they left the start in Cuneo 158 kilometres earlier.

After the group splintered on the imposing climb of the Montoso late in the stage, eight riders regrouped on the descent before one final test in Pinerolo.

Dunbar closed on Gianluca Brambilla (Trek-Segafredo) and Eros Capecchi (Deceuninck-Quick-Step) up the steep cobbled climb towards the finish but the three riders then began to look at each other, allowing Benedetti and Bahrain-Merida’s Damiano Caruso to sweep by.

Dunbar, making his Grand Tour debut having been thrust into the team at late notice when Egan Bernal broke his collarbone in training, was left to rue a missed opportunity as he had to settle for third place.

Polanc got in a breakaway group on the 158km stage 12 and finished 25 seconds behind home favourite Benedetti. He heads into stage 13 with a four minute, seven second lead over favourite Primoz Roglic.