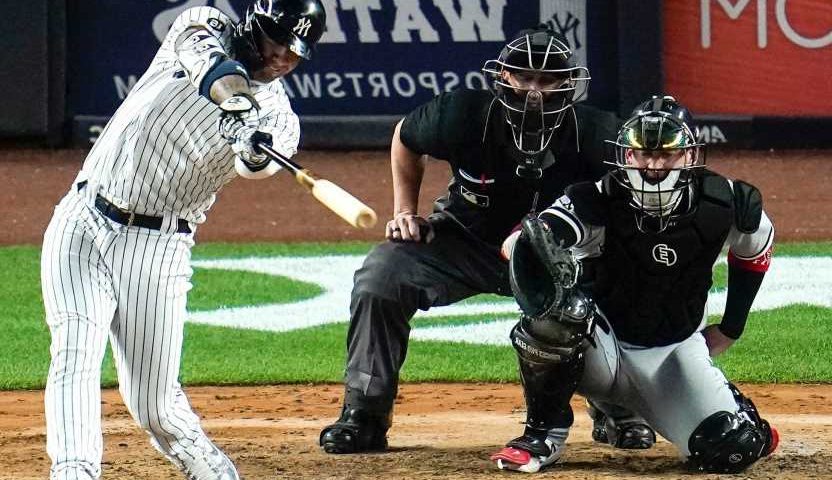 Yankees could lose star outfielder for season after wrist surgery

Yankees will be shut down by White Sox ace

The Yankees arrived home Friday and put their recent surge to the test by welcoming the American League’s top team to The Bronx.

While the Yankees’ starting pitching dominance held up, their bats faced an equally daunting task before delivering just in time.

In a game that featured 26 total strikeouts in a pitcher’s duel between Jordan Montgomery and Carlos Rodon, the game was decided by the bullpens, with the Yankees coming through late for the 2-1 win over the White Sox at Yankee Stadium.

Gleyber Torres walked it off for the Yankees once again, roping a single to score Aaron Judge in the bottom of the ninth and send the season-high crowd of 14,011 into a roar.

Judge had led off the bottom of the ninth with a single against White Sox reliever Evan Marshall and Gio Urshela followed with a single of his own to put runners at first and second.

The Yankees had used a triple play to get out of the top of the ninth inning unscathed. The first two White Sox reached against Aroldis Chapman before Andrew Vaughn grounded a hard chopper to third base. Gio Urshela scooped it up, stepped on third and threw to second baseman Rougned Odor, who turned and fired to first baseman Luke Voit to finish off the defensive gem.

With the Yankees (26-19) coming off back-to-back shutout wins, Montgomery pushed their scoreless streak to 29 innings with seven shutout frames of his own. He struck out a career-high 11 while walking none in his best start of the season.

The White Sox (26-17) countered with Rodon, the lefty who threw a no-hitter last month and began Friday’s game with five straight strikeouts. He finished with 13 punchouts, but with his pitch count at 95, manager Tony La Russa pulled him after six scoreless innings.