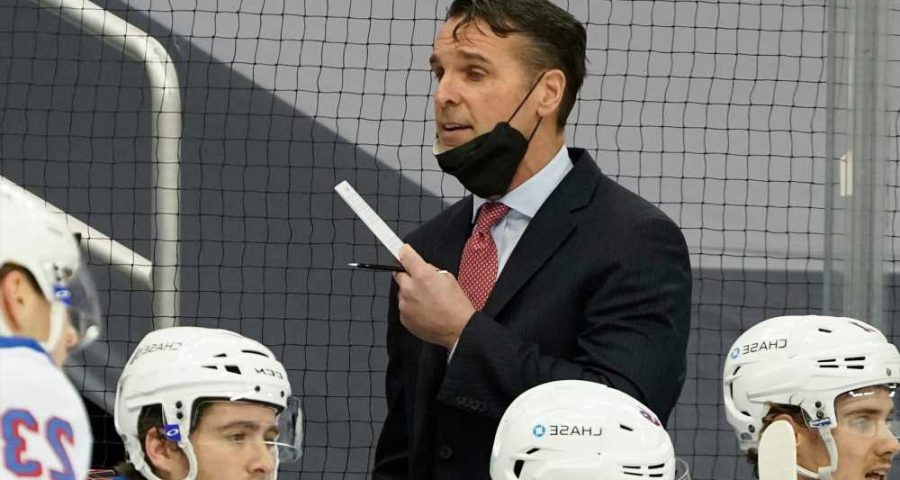 How new coach could alter Rangers’ only expansion list decision

Can you imagine the uproar had David Quinn played a player like Leo Komarov on the Rangers’ first line the way that Barry Trotz has routinely slotted the plugger onto the Islanders’ top unit since late in the regular season?

Say after me: Often it is not as much about what the coach does as who the coach is.

The stream of emails and messages from furious fans excoriating Quinn while lauding Trotz following this season’s stream of one-sided Battles of New York provided chuckles, chortles and guffaws.

Quinn was in his third season behind an NHL bench while Trotz was in his 22nd in a sure-shot Hall of Fame career that began, by the way, with his Predators winning just two playoff rounds in his 15 seasons behind the Nashville bench.

So it can take some time, and I hope that Quinn, who is itching for another shot behind an NHL bench, gets it.

I said this on our “Up in the Blue Seats” podcast last week, and it bears repeating: David Quinn is the person you would choose as your brother, your best friend.

The question is not whether an NHL general manager would choose to hire him as his head coach. The question is which team would mutually grow with Quinn.

Was about to report that Paul Maurice would be added to the list of Rangers coaching candidates were he to be dismissed following a potential Jets’ first-round ouster, but this just in: Connor McDavid says Maurice should make the move from Winnipeg to Broadway immediately.

You do understand that the mayhem the NHL authorizes on the ice every night of the playoffs, in which players are permitted to hack, rough, interfere and throw punches without consequence, would be tantamount to Major League Baseball allowing — nay, encouraging — pitchers to throw a stream of 100 mph pitches at batters’ heads during its playoffs because of, well, “intensity,” don’t you?

How do you think the 1980 Islanders, a team that could look after itself as well as any in NHL history, would have made out against the Flyers operating under today’s see-no-evil environment?

Probably not so well in light of the fact that those Islanders were awarded 40(!) power plays in the six-game finals against the Flyers, overwhelming beleaguered goaltenders Pete Peeters and Phil Myre by scoring 15 power-play goals(!!) in the series, including five(!!!) in the 6-2, Game 3 victory at the Coliseum.

Which reminds me: I must have poked too much fun at Myre at some point of his career, for upon arriving at the press box in Detroit during one of those playoff runs in the Scotty Bowman era, Myre, then working as a scout, was standing in front of my assigned seat while having a conversation with Red Wings broadcaster Paul Woods.

After waiting a fair amount of time, I mentioned to Myre that he was blocking my seat. He took a look at the place card with my name, glanced at Woods, turned to me, scrunched up his face and said, “It figures.”

OK, you’re hiring a head coach for your hypothetical NHL team, but you can pick only one from either Column A or Column B:

Is anyone choosing a coach from Column B?

Despite all of the candidates on that list having won the Stanley Cup while none on the other has done so?

Apparently extremely late to the party on this, but there is an undercurrent suggesting Joel Quenneville has his sights set on moving to Seattle to become the coach of the Kraken once his season is over with Florida, which might explain why Seattle general manager Ron Francis has moved so slowly on this hiring.

If the Puddy Tats let Quenneville get away, and certainly so if this is related to money, then perhaps we should all rethink whether Aleksander Barkov is a slam-dunk to re-up with the Panthers before he becomes eligible to hit the open market a year from July.

Of course the Lightning followed the letter of the law with their long-term injured reserve shenanigans regarding Nikita Kucherov, and please stop with the nonsensical premise that he could not have played the final week or two of the regular season, because how would anyone possibly know that?

Oh, his agent and the team said so?

Well, then that’s a horse of a different color, Dorothy.

But you know who else followed the letter of the collective bargaining agreement law? The Devils when they signed Ilya Kovalchuk to those two, front-loaded $100 million-plus deals in 2010.

And they were persecuted and selectively prosecuted for circumvention (with help from cooperating witness Brian Burke, then GM of the big-market Maple Leafs), because, in broad strokes, Sixth Avenue had no use for New Jersey’s Jeff Vanderbeek ownership.

Once the team was sold, applied penalties were wiped off the slate.

Here is what the rule should be: A team can have a postseason roster that is over the cap, but game lineups must be compliant.

The NHL: No rules in the playoffs.

Except that is, the ones continually flaunted by Colorado’s Nazem Kadri, generally a regular-season asset who devolves into an undisciplined train wreck in the tournament, now suspended for the third time within his past four postseason appearances.

Finally, let’s hope that neither Turner nor ESPN, the networks that will split the NHL’s national package beginning next year, would cut away from a star player berating his team’s goaltender after a gaffe in overtime as Alex Ovechkin did to Ilya Samsonov immediately following the Capitals’ Game 3 defeat to the Bruins.

And as that scene unfolded, all I was thinking was that Ovechkin was fortunate that the goalie wasn’t Alexandar Georgiev.