Last week we had Boyd Cordner taken from the field in Origin I due to a presumed concussion, only to “pass” his HIA and return to play. This week in Origin II, Cameron Munster was also taken from the field after a terrible head smash. Although he did not return to play, he too is reported to have “passed his HIA” to return to the cauldron next week. Concussion specialist Dr Adrian Cohen, of Headsafe, is clear. 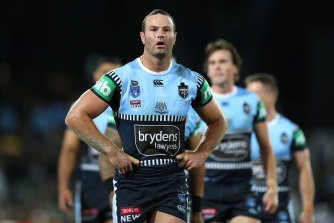 Boyd Cordner will play no further part in the Origin series.Credit:Getty

"The important aspect is if you see any possible ataxia, you don't leave them on the field but bring them off to check that they don't have any concussion symptoms and pass the concussion tests. That is what was done. He was removed and assessed and was OK, and went back on and played well and had no further injuries or incidents. So the process and protocols are working well to protect the players.”

“There is no such thing as different grades of ataxia,” he says. “It means ‘impaired balance or co-ordination, or an unco-ordinated gait’. Or as Wayne Bennett calls it ‘wobbly on his feet’. There are no grades of wobbliness. And you don’t ‘pass’ an HIA. It does not mean you have no brain injury.”

As for Dr Rowena Mobbs of Macquarie University’s National Repetitive Head Trauma, she says, “Ataxia is an important sign, but only a sign. This is similar to your doctor detecting pain at the site of a fracture, with a diagnosis of, well, fracture. It should always be held in this context and correlated with the diagnosis, which was in this case, if you rely on the footage, concussion.”

You don’t ‘pass’ an HIA. It does not mean you have no brain injury.

When you have concussion experts strongly disagreeing with those on the concussion frontlines of football, there is a problem. Last week I cited rugby league’s strict protocol on concussion where it is made very clear:“A player who has suffered a concussion or potential concussion or exhibits the symptoms of concussion should not return to play in the same game (or on the same day), even if they appear to have recovered.”

After ARL Commission chairman Peter V’landys insisted on an explanation, the NSWRL medical report said, on strict examination, Cordner, “showed no category one or category two signs of concern that could have led to him being withdrawn from the game.”

NSWRL chief executive Dave Trodden told the Daily Telegraph. “There are 11 category one symptoms and seven in category two … [Gibbs] said in the report he found no signs that he shouldn’t be allowed back on the field.”

Great! No symptoms of concussion, from either category one or category two. The position of the NSWRL can only be that it wasn’t concussion then.

But the position of Cohen is clear.

“Of COURSE it was concussion. Everyone could see that.”

The NSWRL insists it wasn’t.

Adding further to the confusion, the NRL yesterday issued the NSWRL with a ‘‘formal warning’’ for allowing Cordner to return to the field.

I ask again: so what was it, if not concussion? And why, if it was not concussion, is Cordner taking a break and even his club chairman Nick Politis expressed concern about his head knocks, saying perhaps Cordner “might have to take a bit of a break, longer than a month or two. I don’t know.”

The whole thing is, in sum, a hopeless shemozzle of confusing blather. It is inconceivable that the Blues staff put a player with a history of concussions out there, just after he received what appeared to be another one, so I accept it can’t have been concussion.

But for the sake of public probity, of confidence in the game, can the rugby league people tell us: what it was then? 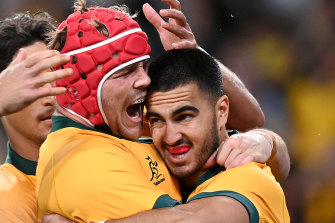 The Wallabies beat the All Blacks in a thriller last week.Credit:Getty

There were two lots of great news and one bit of highly troubling news for Australian rugby this week.

The first was the wonderful victory by the Wallabies over the All Blacks – confirmation that, on their day, they can be more than competitive with the world’s best.

The second was the news on Monday that Rugby Australia has signed a lucrative deal with Channel Nine which will see Super Rugby and Test matches on free-to-air on Saturday nights.

The deeply troubling news is the story I broke on Thursday about 40-year-old rugby player Michael Lipman – a graduate of Joeys who went on to play 10 times for England. After 30 concussions, he has been diagnosed with a condition equivalent to “mild dementia”. Beyond Lipman himself, that terrible news could have huge ramifications for both rugby union and rugby league.

He is not a one-off, as more and more players appear, just like that. I repeat: all contact sports have to get on top of their concussion protocols, or face an existential threat down the track.

As to Lipman, he at least has great family and medical support, and is doing everything possible to make the most of what he has. He remains a fine family man, able to run his business with his wife Frances. It is just that he needs to take measures to counter the damage done, and slow further rates of deterioration.

I was moved, meantime, to get an email from Lipman's one-time cricket coach at Joeys, who remembers him well, and the fact that of all the parents it was his mother who was most insistent that when Lipman batted, he had to wear a helmet.

Getting a bad rap

You can imagine my surprise. This was posted on Instagram late last week by the American rapper Snoop Dogg: “I get it, you hated him 4 years ago and you still hate him now. I’ve seen a lot of hate thrown his way, but this guy is a consistent winner and an overachiever. Call it jealously, call it envy, some people just can’t handle how successful he is and how much money he has, could even be jealous that’s got a hot foreign model as his wife. I know its possibly going to get worse over the next several days, but like him or not, Tom Brady is turning things around in Tampa Bay.”

Got him, yes! Middle stump, with a very late outswinger!

TFF is sorry to report the long-time rugby writer for this paper, Greg Growden, is gravely ill. A great operator who is respected by the entire rugby community and all who worked with him across four decades at this paper, he is also the bloke who went out of his way to give me a start, and mentor me thereafter. I have never forgotten it. We will say many things about him, but the first thing we will say is he is a devoted family man, and that family is tightly around him now. All strength to you, Greg, Elizabeth, Anna and Angus.

Steve “Blocker” Roach, in a forum put on by Macquarie University’s National Repetitive Head Trauma Initiative on the effect of so many concussions in his rugby league career: “I was in denial for a long, long time . . . just forgetting things. My wife Cathy actually noticed it, but she never said anything because she wanted me to come to her and say ‘Look, I'm having a few problems . . . memory and all that sort of stuff . . . talking in sentences, you know . . . forgetting words, [while] you're trying to talk’.” 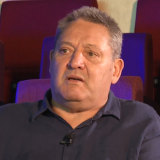 Roach on how many of his cohort from rugby league days are faring now: “[I have] a lot of mates who've had a lot of concussions and [you now] see them with their families, not even wanting to get out of bed, to go and do a job.”

Frances Lipman, whose husband Michael, a graduate of St Joseph's College, is a professional rugby player who played 10 Tests for England: “Michael had a lot of cognitive tests, and he had a score of 77 out of 100, and I thought, ‘That sounds awesome . . .’ I looked it up and it was actually really concerning, because it was actually at the stage of mild dementia. And I am like, 'wow, this is what we are dealing with, and Michael's only 40 years old'.”

Kieren Perkins on being president of Swimming Australia: “I think I would have been surprised and honoured and quite anxious about what the responsibility means and my capacity to deliver it. The old Kieren has the same response. This is a huge honour. I feel an incredibly deep sense of obligation to the sport that has given me so much in my life.”

Rugby Australia interim CEO Rob Clarke on the new deal with Nine: “This is a landmark deal that includes everything in the showbag, and it gives more Australians more access to more rugby than ever before.”

Hamish McLennan on Clarke still being interim CEO: “Perhaps we can get him to keep extending, like an Elton John concert tour that never ends.”

Champion netball coach Lisa Alexander on wanting to be head coach of a men’s AFL team: “People always say to me, ‘Oh, you should start at the bottom and work your way up'. Well, would you say that to the CEO of BHP? If they went across to Macquarie Bank, would they have to go to the bottom of the pile there? I mean, it’s absurd. But that’s the sort of argument I have to put together for people who don’t understand.” 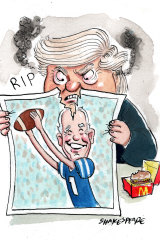 Joe Biden is the next president of the United States – and don’t you forget it – and he used to be a handy player in American college football, as one of his teammates from 1960, Michael Fay, attested to the New York Times: “He was a halfback, and he scored some running touchdowns too, but he was the guy that was the main pass catcher. We were seniors in 1960, so throwing the ball was almost a mortal sin. But he caught seven or eight touchdown passes in eight games, which was a lot for back then.”

Peter V'landys on the NRL's year: “We’re a bit like Pennsylvania – we are behind but we are picking up very quickly.” STOP THE COUNT!

Team of the Week

Ademola Lookman. This week took just about the worst soccer penalty ever taken. Look it up on YouTube.

Wallabies. Did wonderfully well to beat the All Blacks in the dead rubber, in an entertaining game. What we need next year is to contrive a Bledisloe made up entirely of dead rubbers.

Hamish McLennan and Rob Clarke. Between them, the chair and CEO of Rugby Australia appear to have given rugby in Australia a real shot, by securing a broadcasting deal with Channel Nine.

NSW. Squared the Origin series as it heads to Brisbane for the decider.

NSW. Bounced back from being dismissed for 64 to beat Tasmania by 145 runs.

RIP. Glenn da Vanzo, John Griffiths, Ollie Hall. All three fine rugby men – the first of whom “shoulda been a Wallaby” and the last two who were – passed away in recent days. All three were great servants of the game. With this many of our friends passing away at once, you and I must be getting older. Vale.

Sports news, results and expert commentary delivered straight to your inbox each weekday. Sign up here.