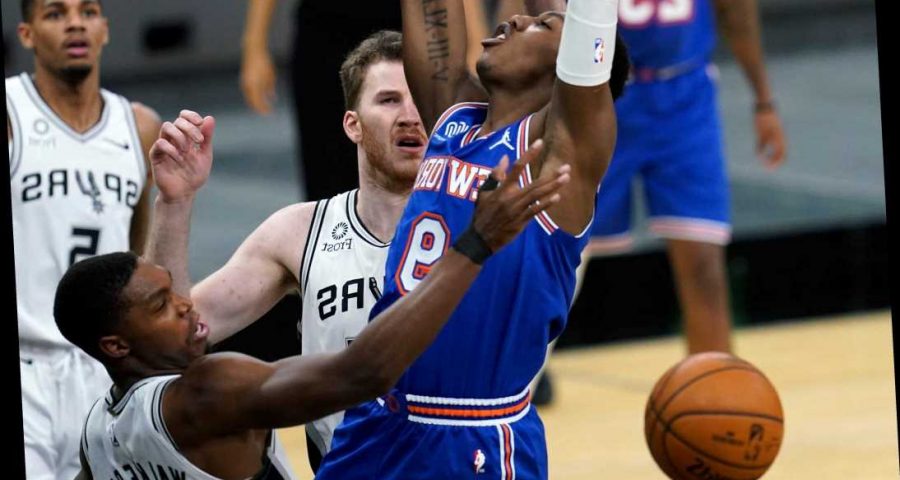 Key Knick could be out awhile

RJ Barrett is finally putting it all together

The Knicks were without Derrick Rose — and a pulse.

Ths pandemic season finally crushed the Knicks on Tuesday and demonstrated how a player can go from invisible to prominent in an eye-blink.

Just a week ago, Frank Ntilikina hadn’t played since late December — felled by a knee sprain, COVID-19 protocols and being yanked from the rotation.

Tuesday in San Antonio, the Frenchman became the Knicks’ starting point guard and maybe for the foreseeable future.

Though Ntilikina held up his end of the bargain with 13 points, 5 of 7 from the field and 3 of 3 from 3-point range, the undermanned Knicks couldn’t compete in the second half and their three-game winning streak was snapped in an ugly 119-93 loss at AT&T Center.

“You get what you deserve,’’ Tom Thibodeau said. “It’s disappointing how we played.’’

The Knicks looked tired on the defensive end and allowed the Spurs to drill 7 of 14 3-pointers in the third quarter to crush them 36-21 in the period. That put them down 19 points after three quarters, 81-62, and they fell behind 27 in the fourth quarter. The Spurs finished with 17 3-pointers.

The Knicks, who fell back to .500 (18-18) at the season’s midpoint, learned before the game their new starting point guard, Rose, would be out indefinitely for health and safety COVID-19 protocols.

The Knicks would not say if Rose had tested positive for COVID-19 or had encountered a person with the virus.

That will likely mean Rose is out until after the All-Star break. The Knicks finish the first half Thursday against Detroit.

When pressed, Thibodeau said Rivers also has “an ankle issue.’’ (Rivers has not been on the injury report).

Quickley got hot in garbage time and finished with a team-high 23 points, making 6 of 12 3-pointers.

Even with Rose and Payton missing, Rivers was not placed back into the rotation and did not play. The Post reported Rivers was not on the bench for Saturday’s game after he hinted he could be traded soon, and the Knicks said he was in the locker room getting treatment on his ankle. They could have used his veteran savvy Tuesday.

Rose’s situation is also uncertain. Usually protocols means a player is away from the team for a week, perhaps longer if he tests positive.

The Knicks’ lax play started late in the first half after they blew a six-point lead. San Antonio’s Patty Mills was left wide open to hit a desperation 3 from the corner at the buzzer off an inbounds pass. That gave San Antonio a 51-47 lead at halftime and all the momentum.

Julius Randle scored 14 points, with 11 rebounds and five assists and got to rest in the fourth. RJ Barrett had another solid scoring game with 15 points, also taking a seat in the final period.

This was more about the Knicks’ defensive lapses after entering the night as the second-best defense in the NBA.

Gregg Popovich’s Spurs, after missing the playoffs for the first time since 1997, are back as a force, moving to 18-13 even though they were missing star LaMarcus Aldridge, out with a stomach virus.

The Knicks had stayed clear of major COVID-19 issues most of the season. The Spurs have not. In fact, San Antonio postponed its scheduled game against the Knicks last month because of COVID-19 issues.

But now things are catching up to the Knicks as they look to survive without their top two point guards.