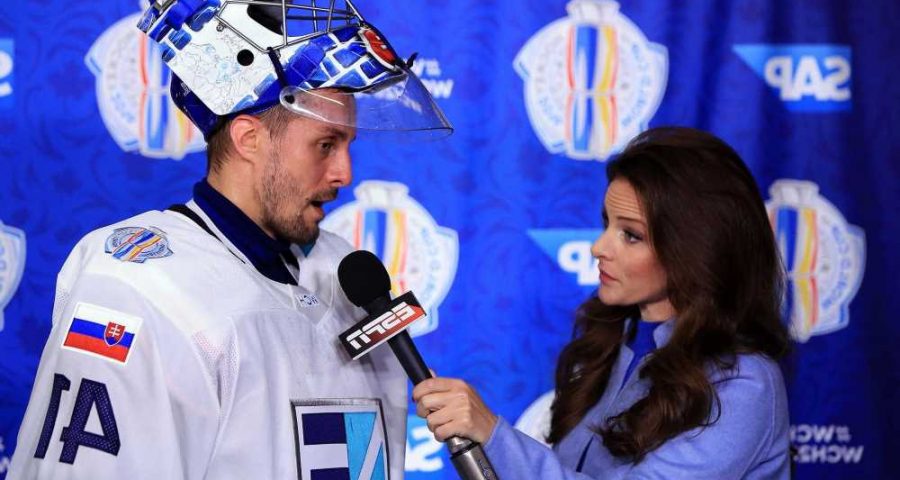 Chris Webber could be out at TNT after March Madness frustration

The NFL forgot why everyone was tuning in for the draft

Jets are the worldwide leader in producing ESPN analysts

For its NHL coverage, ESPN has signed Leah Hextall to do play-by-play and other roles, The Post has learned.

While the exact number of games she will broadcast is not yet known, she will be the first woman play-by-player to be a regular part of national NHL TV package.

Hextall has been broadcasting hockey for 17 years. Last year for SportsNet, she became the first woman in Canada to call play-by-play for a national NHL broadcast.

She previously became the first woman to call the NCAA Men’s Tournament, which she did for ESPN. She is the cousin of former Flyers great Ron Hextall.

ESPN and TNT will take over the NHL packages beginning next season. ESPN has not settled on its No. 1 play-by-player, but Steve Levy and Sean McDonough have emerged as the favorites for the top spot, according to sources. Ray Ferraro and Brian Boucher have been signed and are expected to work on the Stanley Cup Final.

TNT has hired Kenny Albert and Eddie Olczyk as its No. 1 team.

Hextall will be a part of women further expanding into play-by-play. Beth Mowins has done NFL games for CBS and has worked Cubs games this year.

Hextall will now be a part of ESPN’s NHL play-by-play roster.

Yes! A layup for Dolan with Marv

It makes perfect sense with fans in attendance at the Garden for the Knicks to honor Marv Albert during a game. It would be ideal if Albert could be calling it courtside. If that is possible is still to be determined.

Turner’s plan right now is to have its announcers call the opening two rounds leading up to the Eastern Conference Finals remotely from Atlanta. It expects to be at the conference finals.

Knicks owner James Dolan and Albert had a famous falling out in 2004 that ended in a divorce. Dolan would look like a big man if he honored Albert’s legendary career.

Papa Clicker is offering no rating on Dave Kindred’s book, “Leave Out the Tragic Parts: A Grandfather’s Search for a Boy Lost to Addiction” but Papa Clicker, my father Herb, gives a hearty recommendation.

Kindred, an all-time columnist, has written about his love for his grandson, who died after being addicted to alcohol and leaving his home and his family at 18. Kindred goes on to recount Jared’s life and his decision to roam instead of the comforts of following a more traditional path.