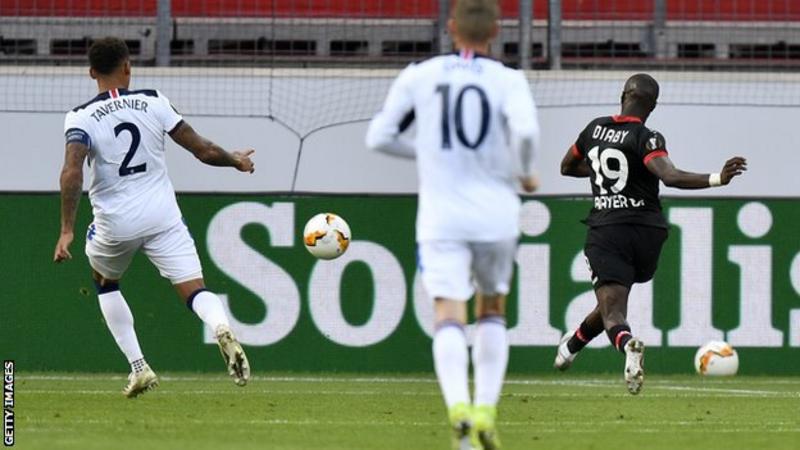 Bayer Leverkusen ended Rangers’ 13-month Europa League journey from the first qualifying round to the last 16 with a straightforward win in Germany.

Leading 3-1 from the first leg at Ibrox on 12 March, Peter Bosz’s side were rarely troubled in an empty BayArena.

Kai Havertz hit the bar, slid a shot wide, and had an effort saved but it was Moussa Diaby’s alert run and finish that broke the deadlock.

Rangers – with Brandon Barker starting ahead of Ianis Hagi – looked to trouble the team that finished fifth in the Bundesliga on the break. But opportunities were scarce.

A heavy touch by Alfredo Morelos spurned an early opening, and it was 21-year-old German international Havertz who went closest in the first half, clipping Allan McGregor’s crossbar with an angled snapshot and sliding a shot narrowly wide when one on one with the Rangers goalkeeper.

Leverkusen, playing their first match since losing the German Cup final to Bayern Munich on 4 July, were tidy in possession and threatened with balls through Rangers’ central defence.

Had it not been for a Filip Helander block from Florian Wirtz’s shot after a four-on-three attack, Rangers would have trailed at the break.

Diaby broke the stalemate in 51 minutes when he scampered clear of James Tavernier and on to a Charles Aranguiz ball before finishing high past McGregor.

The veteran goalkeeper used his left foot to save superbly from Havertz soon after before Rangers’ best chance – Connor Goldson having a header cleared off the line by Edmond Tapsoba.

That was as good as it got for Gerrard’s side, though, as a campaign that began with a win over St Joseph’s in Gibraltar on 9 July last year fizzled out.

Man of the match – Charles Aranguiz 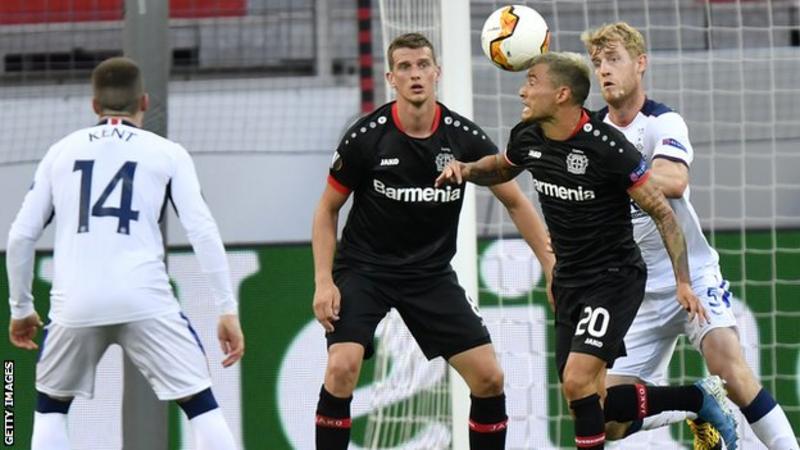 What did we learn?

The two-goal deficit meant progression to the last eight was always going to be a tall order. Gerrard had hoped the pace of Brandon Barker and Ryan Kent could trouble Leverkusen, but the Germans’ passing was too slick and no Rangers player could impose himself enough to change the direction of the tie.

In-demand striker Morelos may have played his last game for Rangers. He scored six of his team’s 13 goals in the marathon campaign, but in Germany he offered few glimpses of his earlier danger. Gerrard will list new strikers Kemar Roofe and Cedric Itten in his 2020/21 Europa League squad, but funds raised from a sale of Morelos might be well spent on adding thrust and creativity to the midfield.

Rangers competed admirably in the tournament against teams from Poland, Holland and Portugal but came unstuck against the team that finished fifth in the Bundesliga, showing the strength of one of Europe’s top leagues.

What did they say?

Rangers manager Steven Gerrard told BT Sport: “We’re disappointed with the result. I don’t think we found our level or performance to give it a good go tonight. The best side won and go through.

“There’s a lot we can improve on and a lot we can work on moving forward and we’ve found a level tonight to strive for. Hopefully one day we can get to that level.”

Rangers return to Scottish Premiership action on Sunday, welcoming St Mirren to Ibrox and looking to add to the opening-day victory over Aberdeen at Pittodrie.

Attempt saved. Borna Barisic (Rangers) right footed shot from the left side of the box is saved in the top right corner. Assisted by Jordan Jones.

Jonathan Tah (Bayer 04 Leverkusen) is shown the yellow card for a bad foul.

Jordan Jones (Rangers) wins a free kick in the attacking half.

Attempt missed. Leon Bailey (Bayer 04 Leverkusen) left footed shot from outside the box is close, but misses the top right corner from a direct free kick.

Kevin Volland (Bayer 04 Leverkusen) wins a free kick in the attacking half.

Attempt missed. Kai Havertz (Bayer 04 Leverkusen) right footed shot from a difficult angle on the right is close, but misses to the right. Assisted by Aleksandar Dragovic.

Exequiel Palacios (Bayer 04 Leverkusen) wins a free kick in the defensive half.

Attempt blocked. Greg Stewart (Rangers) left footed shot from the centre of the box is blocked. Assisted by Ianis Hagi.