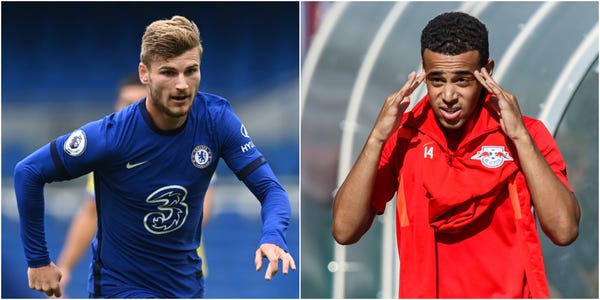 RB Leipzig midfielder Tyler Adams says it will "extremely difficult" for the German club to better its achievements from last season following the departure of star striker Timo Werner to Chelsea.

Werner scored 34 times in all competitions for Leipzig last term, firing the club to a third placed finish in the Bundesliga and its first ever Champions League semifinal.

Speaking with Insider, when asked if Leipzig can continue this season in the same vein as last, Adams said: "It's going to be extremely difficult, obviously we've lost some key players now."

Adams did not mention Werner by name, however the German international is the only regular first team player to have left Leipzig since the end of last season.

"But we've bought in some good players as well, we're going to have to continue to believe in each other [and] understand that we have to play for each other."

Adams continued: "Bayern [Munich] and [Borussia] Dortmund are obviously always two of the top teams in the league, and of course for us, we know it's tough competition to compete for the league, but that's one of our goals. We are not going to stop at where we are at right now."

Adams is hoping for next season to be his breakthrough

The 21-year-old USMNT star missed the whole first half of last term through injury, however managed to establish himself as a regular in Julian Nagelsmann's side following his return to fitness.

Playing as either a central midfielder, a right midfielder, or even a fullback, Adams notched up 17 appearances during 2020, including an extremely special cameo against Atletico Madrid in the Champions League quarterfinal in which he scored a last gasp winner to book his side's place in the last four for the first time in history.

"It was an unbelievable feeling, obviously [there was] a lot of hard work for me behind the scenes because those first six months of last season I was injured," said Adams.

"It was a good feeling to grind it out for those six months and then get a lot of games under my belt and ultimately be rewarded with a little bit of success in the quarterfinals of the Champions League.

"So many emotions went into that game, and it was unfortunate to lose in the semifinals, but it was a good platform for us to show what we are capable of and I think we are only going to grow from that opportunity."

On next season, Adams added: "For me, it's just about continuing to play as many games as possible, and continue to establish myself within the team and also within the league as one of the best midfielders in the league, and I think I have the capability."

Leipzig kicks off its 2020/21 Bundesliga campaign on September 20 when it hosts FSV Mainz.