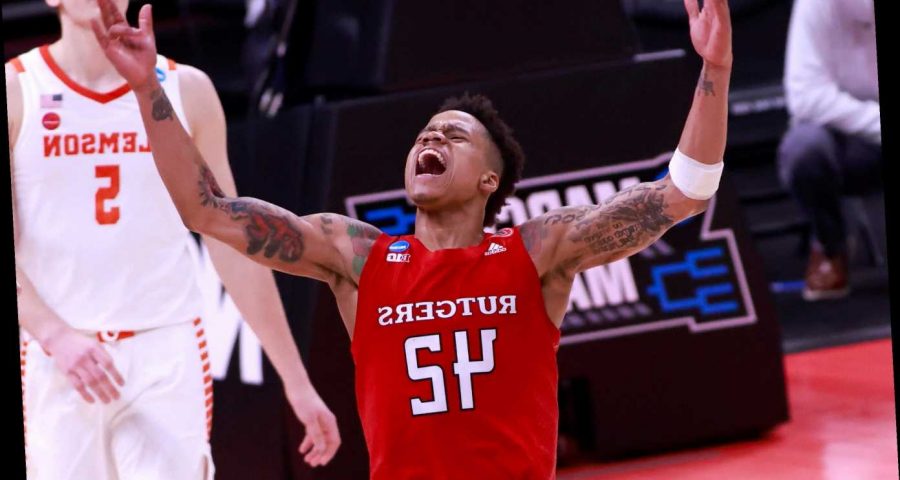 Jacob Young’s father played with Clyde Drexler and Akeem Olajuwon on the University of Houston’s Phi Slama Jama team that was upset in the national championship game by Jim Valvano and North Carolina State, and he played again with Olajuwon the next year when Patrick Ewing and Georgetown denied them in the 1984 title game.

Michael Young was a 6-foot-6 forward on those teams, a hometown hero from Yates High School, and on Sunday night at Lucas Oil Stadium in Indianapolis, his alma mater will be trying to survive and advance to the Sweet 16 against Rutgers.

His son Jacob plays for Rutgers.

Michael Young and his wife Tina will be in the stands.

Maybe just a little bit conflicted. But maybe not.

“I’m pretty sure he’s gonna wear a Rutgers shirt first, ’cause, you know?” Jacob Young said with a laugh Saturday, “I’m his blood, his son. I’m pretty sure it’s different when your son, somebody that you raised, is playing against your alma mater.”

“He’s exactly right,” Michael Young told The Post. “Either way, I’m gonna have some feelings, but I’m pulling for Rutgers.”

Jacob Young also comes out of Yates High School and played 39 games over two seasons at Texas before transferring to Rutgers. His father is third in scoring in Houston history and is one of five players to have his jersey retired by the university.

Before Rutgers made history on Friday night by winning a men’s NCAA Tournament game for the first time in 38 years, after making history by reaching the tournament following a 30-year absence, Jacob Young couldn’t help but notice that No. 2-seed Houston very likely would be next if the Knights could defeat Clemson in their Midwest Region first-round game, and allowed himself to dreamed this improbable father-son dream.

“We gotta get this win so we can play them,” he said. “I can’t wait. I’m just so pumped up and ready. There’s so many thoughts going through my mind, I don’t even like know what to say.”

“Who wouldn’t want to beat like a hometown team?” Jacob Young said. “We’re so connected now we’re ready to go for Sunday.”

Jacob Young is a 6-2 senior racehorse guard with a will to win. Michael Young was asked if his son’s unmistakable swag reminds him of himself.

“No, you know, I didn’t have a swag, I was a silent assassin,” the father said. “He’s kinda talking out there, moving out there, pumping his arms, you know? That’s his style of play.”

“He is,” Michael Young said. “I love watching him.”

Jacob’s teammates love playing with him.

“Jacob’s kinda turned into one of my favorite teammates, the way he loves basketball. … You never have to worry about him playing hard,” Paul Mulcahy told The Post. “His energy is contagious, his smile’s infectious, and he just really, really loves the game of basketball.”

The father was asked whether his son wanted to follow him at Houston. Jacob’s older brother Joe played there from 2011-13.

“Well, he had pretty much already committed to Texas,” Michael Young said. “Whenever Coach [Kelvin] Sampson had gotten the job [April 2014] … to answer your question, he never heard anything from University of Houston. He wanted to stay close to home and Texas was a great school, a great opportunity that wasn’t too far away from home.”

The father, 60 years old, knows how magical March Madness can be … and how heartbreaking it can be.

“The older I get, the more I respect it … it was a lot of fun playing with the guys that I played with, along with our style of play,” he said.

He went to three Final Fours.

“Also, as I get older, I understand how tough it is to get there,” Michael Young said.

He was a UH assistant coach for one season and spent five years as Houston’s strength and conditioning coach before becoming director of basketball operations and performance enhancement.

Jacob has played ball in the summer with some of the Houston players.

“I know one thing,” Jacob said, laughing. “If we do get the win, then go home, back to Houston, with a big smile on my face.”