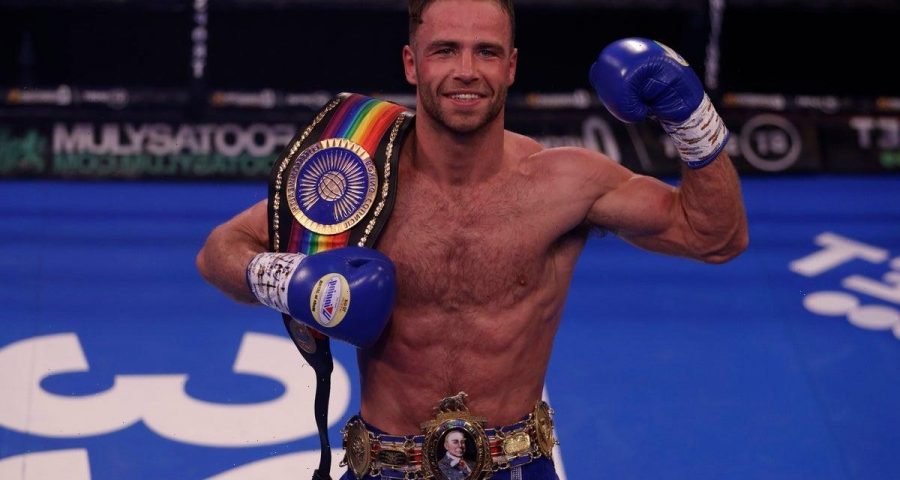 In a boxing world of extremes, a deal worth $75m to Tyson Fury and Anthony Joshua was announced just as Felix Cash and Denzel Bentley walked to the ring at the ancient York Hall for a forgotten British title fight.

Fury and Joshua have agreed the money side of their elusive showdown; the end cut will be a lot higher. This news arrived at ringside at the empty, iconic East London venue as the two men in the British middleweight title fight waited for the first bell. They are fights and fighters united in many ways, but operating in a modern sport that is inventing the rules as it goes along.

On Saturday night at York Hall there was a brutal finish to the fight when Cash was pulled off by the referee after 1min 24sec of the third round to win the British title. It was a flawless performance by Felix Cash, make no mistake.

Cash and Bentley are men from boxing’s opposite ends, two boxers with very little shared history; Bentley started to box when his brother bought some cheap gloves from a market and Cash is a traveller boy, a natural born fighter, with many years of traditional boxing inside the amateur system. Bentley was the British champion, Cash the Commonwealth champion and both were unbeaten. It was a great trade fight, which is always a polite way of saying that it had slipped under most radars. It was, to me, just a great fight.

When Bentley and his mates had the cheap boxing gloves out on the Patmore Estate in Battersea, throwing wild punches and getting bloody noses, Cash was queuing to spar in one of the five rings inside the GB Boxing system in Sheffield. That is called grade in our business.

Bentley was finally taught to box, to stand, to think like a boxer when he went to the Fisher gym in Bermondsey. Bentley was 19 and had not had a fight when he walked through the doors at Steve Hiser’s South London temple; Cash at that age was an elite, established boxer. Bentley was shaped by hectic skirmishes on the five-a-side pitches on his estate, Cash shaped in overseas fights wearing the GB vest. That is grade again.

Still, the professional game has a way of transforming fighters, making novices seasoned and taking away the skills of the experienced amateurs. The fighters mix in gyms with all sorts of styles, people with crazy desires, edges are smoothed, some skills dropped and during this inevitable evolution advantages can vanish. Sure, Cash and Bentley were made on opposite sides of the boxing tracks, but during their professional careers in the ring and in the gym, they have moved ever closer: On Saturday night they met. It was, according to most, 50-50 before the first bell.

Cash insists he always knew that he would have too much on the night, too much boxing brain, too much power and far too much experience; Cash knew he had the grade. The bookies had Cash in front as their favourite, but this year has been a bad, bad year for the bookies. Cash was unbeaten in 13 fights and is a young 28.

The story of the this fight was not meant to be defined by the facts, by the history of the men and by any type of science. Well, that was the thinking before the first bell. Bentley has impressed in visits away from his Peacock gym base, he had people talking about him and they were saying very kind things about the new British middleweight champion; Bentley could bang, he was awkward, he fancied it, as we say in boxing. Cash heard the talk and wisely never ignored it; perhaps Bentley heard the same praise and let it get to his head. Bentley certainly looked a bit shocked during the fight, he looked like he had no idea that a man could push him back so easily and be so difficult to hurt. It is called grade.

“I will be honest,” Cash said. “I expected a bit more, I thought he would be a bit more awkward. I just walked through him.” Cash means that he thought it would be harder to hit Bentley; it was not, it was easy, far too easy. The finish, as I said, was clinical and savage, a violent blur of punches. Cash trapped Bentley against the ropes, above the corner of the champion, and let his hands go, especially his right, and for just a second Bentley was out on his feet. The stoppage was correct.

Bentley had three stitches in a cut by his eye and will let his heart and pride mend before getting back in the gym. He is only 26, it was just his 16th fight, his first loss. It’s not even a long road back from those gentle numbers and he will be back.

Cash, meanwhile, will have some options falling his way, especially now that his promoter, Eddie Hearn, has signed a staggering deal with DAZN to broadcast all of his British shows, perhaps as many as 30 each year. Hearn will need championship content, men and women in the position to grab opportunities; Cash might get a chance at a world title. It also looks like he could meet Liam Williams, the former champion who relinquished the title last year and was placed in ”preferential” status by the British Boxing Board of Control. If Williams wants to fight for his old title, there will be an attempt to make the fight and if that fails there will be a purse bid to make it happen.

The end at York Hall was a reminder that boxing is a very basic sport and when you take away the glitz, the endless hype and the seemingly bottomless pit of cash, it is just two fighters under the lights. The money, the venue and the prizes become an irrelevancy at that point. Both Joshua and Fury fought for nothing in the same York Hall ring, now they stand on the edge of a $500m fight. We might just be witness to a special time, a time when pride and fairy-tale cash combine.