Miami: Prosecutors have dropped charges against star fighter Conor McGregor after he allegedly smashed a fan's phone outside a Miami hotel.

The State Attorney's Office said on Monday the victim has stopped cooperating with investigators and has recanted his story. The Miami Herald reports the fan, Ahmed Abdirzak, dropped his civil lawsuit with McGregor after reaching a settlement. 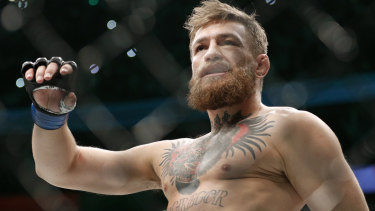 Conor McGregor has settled with a fan whose phone was smashed by the retired star.Credit:AP

The 30-year-old fighter was arrested in March. According to a lawsuit, Abdirzak and other fans were taking video of McGregor outside a hotel when the fighter allegedly punched the phone out of Abdirzak's hand, repeatedly stomped on it and walked off with it in his pocket.

McGregor was sentenced last year to community service and anger management counselling after he attached a rival's team bus in New York.

It emerged in March that he was under investigaiton in Ireland after a woman alleged he sexually assaulted her at the Beacon Hotel, an establishment attached to a business park on the edge of Dublin.

McGregor is a former two-division Ultimate Fighting Championship title holder who famously lost to boxing legend Floyd Mayweather in 2017. He has since retired.