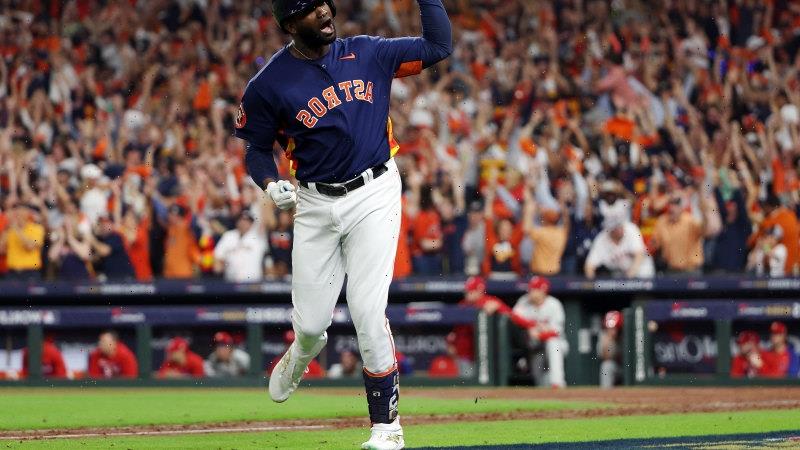 Yordan Alvarez hit a towering go-ahead homer and the Houston Astros clinched their second world series title in six seasons – getting 73-year-old Dusty Baker his first crown as a manager with a 4-1 win over Philadelphia in game six.

As Alvarez’s 450-foot blast in the sixth inning disappeared, Astros starting pitcher Framber Valdez jumped and wildly screamed in the dugout as fans in the crowd of 42,948 went into a frenzy. 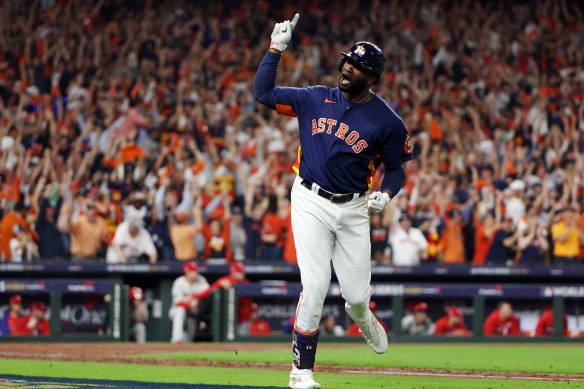 Yordan Alzarez celebrates his three-run homer to put the Astros ahead in game six of the world series.Credit:Getty Images

Baker finally got his first title in his 25th season as a manager, the past three since being hired by the Astros to help the team regain credibility after the sign-stealing scandal that cost manger A.J. Hinch and general manager Jeff Luhnow their jobs, and made Houston the most reviled team in baseball.

Baker, who had been to the World Series twice before as a skipper, is the oldest championship manager.

Houston’s coaching and training staffs circled around Baker after the final out, jumping up and down, and chanting “Dusty! Dusty! Dusty!” in the dugout before they joined the players on the field.

Astros rookie shortstop Jeremy Pena was the series MVP after getting another key hit, a single to set up Alvarez’s drive. 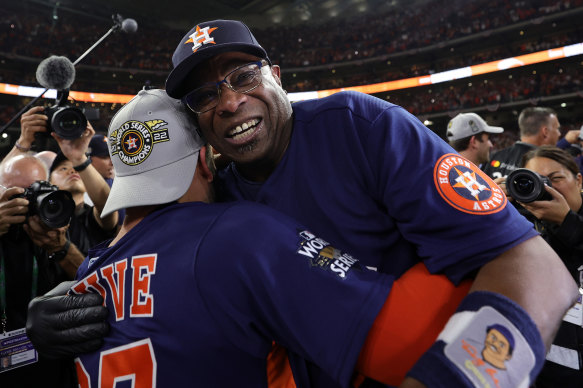 Alvarez’s homer cleared the batter’s eye in centre field, the backdrop that extends 40 feet above the field, and made it 3-1. It was the first time the Cuban slugger connected since the first two games this post-season.

Houston tacked on a run later in the same inning thanks to a single from Christian Vazquez.

Valdez earned his second win of this series, but the lefty had walked off the mound with the wildcard Phillies up 1-0 on Kyle Schwarber’s solo homer leading off the sixth.

It was Schwarber’s third home run in the past four games. But by the time he batted in the eighth, the national league’s home run leader was reduced to bunting, trying for a hit to stir a dormant Phillies offence. His bunt went foul with two strikes, resulting in a strikeout.

Houston won an American league-best 106 games (of a possible 162) and reached their fourth World Series during a span in which they made it to the American league championship series six seasons in a row.

This was their third championship series and second consecutive world series since former Astros pitcher Mike Fiers revealed after the 2019 season, when he had gone from Houston for two years since being part of their 2017 championship, that the team had used a camera in centre field to steal signs and signal hitters on which pitches to expect by banging on a garbage can.

Philadelphia were 22-29 (win-loss) when manager Joe Girardi was fired in early June and replaced by bench coach Rob Thomson, the 59-year-old baseball lifer getting his first chance a big league manager.

The Phillies finished the regular season 65-46 under Thomson, their 87 wins good for the sixth and final spot in the national league playoffs, on the way to their first world series since 2009.

News, results and expert analysis from the weekend of sport sent every Monday. Sign up for our Sport newsletter.