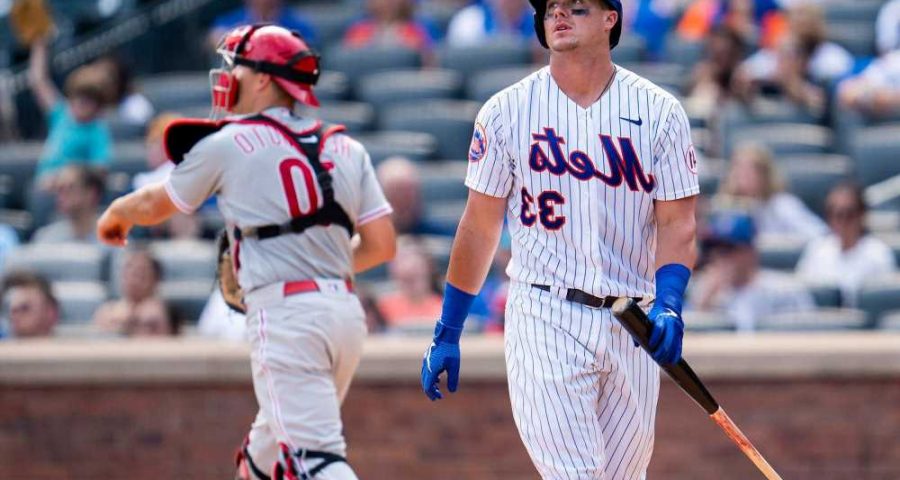 How I know Jacob deGrom belongs in the greatest-ever conversation: Sherman

Gerrit Cole can be agent of change in MLB's sticky situation: Sherman

Sunday was explainable. Sunday the Mets saw Zack Wheeler at the peak of his skills. What that meant was encountering a fastball powered precisely all around the zone in the upper 90s and what Luis Rojas termed “a Jacob deGrom” slider because it moved so late and fiercely.

So the Mets managed no runs against Wheeler in seven innings and could not do enough damage against the charitable Phillies bullpen and lost 4-2.

Thus, Sunday you understand. But this isn’t a Sunday, June 27, 2021 problem for these Mets. It was their problem in April and May and now June; when Chili Davis was the hitting coach and after his dismissal. They just are not producing enough offense.

If they were even middle of the pack, the Mets might be leading the NL East by eight games — perhaps double digits. But they are not middle of the pack. They dropped to averaging 3.59 runs per game for the season and that sank them below the Pirates for averaging the majors’ fewest runs.

The Mets — even with the Phillies, Braves and Nationals winning on Sunday — still lead the division by four games. They are still the only NL East team with a winning record. But the pivot to their season is about their bats. If they hit, they should win this division, probably comfortably considering they have the most overall talent. But we have seen how they wouldn’t win it too by the way they have left the door ajar, so far.

“We have a lot of guys who have hit well in the past and just haven’t done it this year,” Luis Rojas said. “We have a confidence level that it is going to click.”

The hope was that the return of Jeff McNeil and Michael Conforto would launch an offensive outbreak. It hasn’t. The Mets now expect to get Brandon Nimmo back Tuesday and J.D. Davis is set to go on a rehab assignment and not be far behind.

“We really haven’t had our full lineup, pretty much the entire year,” Pete Alonso said. “It is tough to get going when you don’t have your pieces in there every day.”

Except that is the sport more than ever. Every team is playing short of its ideal group persistently. And the moment one player returns, another goes down. Besides, the strength of this Mets team was supposed to be offensive depth. There have been a lot of pedigreed hitters in the lineup even with all of the injuries, and they just have not honored their track record.

One dumb columnist (OK, it was me) wrote in spring training that this Mets offense could be among the franchise’s best ever. After all, they were top four in the majors last year in average, on-base percentage and slugging percentage. That their run scoring did not equate to that output had to do with the kind of clutch hitting that tends to go up and down from year to year. Plus, the Mets were adding Francisco Lindor, James McCann and better bench alternatives.

So when the first 23 games produced a .240 average, a .688 OPS and just 3.3 runs per game, the Mets fired Davis. That was no panacea. In the next 49 games leading into Sunday, the Mets were .222, .669 and 3.8 runs per game. That includes the last three weeks when sticky substances have been policed more, spin rates are down and offense has generally been up league-wide. But the Mets have managed more than four runs just four times in their last 19 games and did not exceed it in this series. They scored nine runs in total and managed a split of four games because — like the whole season — their run prevention was superb and the Phillies’ bullpen and defense were atrocious.

On Sunday, the Mets offered a lineup in which only Alonso had a positive OPS-plus and his .252 average was the best in the order. He had three hits. But the rest of the Mets managed just four. A lot of that was Wheeler related. With deGrom now slated to start the Sunday before the first-half break, Wheeler is probably in conversation with San Francisco’s Kevin Gausman to be the NL starter for the All-Star Game. He pitched at Citi Field like he wanted the designation.

And the Mets hit like they have all year — which is to say not enough. It was a Wheeler problem Sunday. But this has been a full-season, up-and-down-the-order, many-culprits issue.

“I think this team is ready to put up a lot of runs consistently,” Alonso said.

More runs are the key to running away with the division — or not.