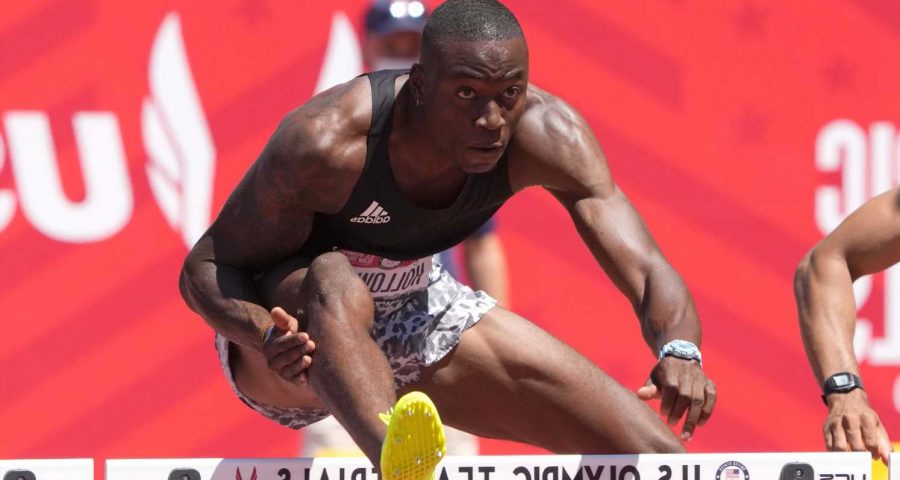 EUGENE, Ore. — The world record in the men's 110-meter hurdles has stood for nearly a decade. The mark in the 400 hurdles has been practically untouchable, going all the way back to 1992.

But on a balmy night at the U.S. Olympic track and field trials Saturday, both of those records nearly fell — and in the span of just 45 minutes.

In a dominant back-to-back display, 110-meter hurdler Grant Holloway and 400-meter hurdler Rai Benjamin each came a fraction of a second away from immortality at Hayward Field, cruising to victory in their respective finals — and showing why the United States likely will be favored to sweep the men's hurdles events at the Tokyo Olympics.

Holloway, the 23-year-old Florida product, was agonizingly close to breaking Aries Merritt's world record in his semifinal heat, finishing one-hundredth of a second behind the all-time mark with a time of 12.81 seconds. He went on to win the final with a time of 12.96.

Sha'Carri Richardson became in an instant star during her Olympic trials and she's one of many Black women set to lead team USA this summer in Tokyo.

Sixteen months after she dropped out of the Olympic marathon trials, Sisson pulled away from a crowded field and won the 10,000 meters by a full 13 seconds, in a new meet record of 31:03.82. She registered negative splits — increasingly fast times — in each of the final eight laps of the 25-lap race.

"I kept telling myself, 'If you’re feeling the heat, so is everyone else, too,' " said the 29-year-old Sisson, who led for roughly three-quarters of the race.

Karissa Schweizer and Alicia Monson finished second and third, respectively. Schweizer also qualified in the 5,000 meters and said she hopes to run both races in Tokyo.

For the second night in a row, 17-year-old Erriyon Knighton found himself competing head-to-head with reigning world champion Noah Lyles in the men's 200 meters. And for the second consecutive night, it was Knighton who came out on top.

A four-star football recruit before he turned pro earlier this year, Knighton edged Lyles to win his semifinal heat with a blazing time of 19.88 seconds, a new personal best. He noted in a post-race news conference that he also slowed up with 20 meters to go, indicating that he may run an even faster time in Sunday's final — which will also feature Kenny Bednarek, 100-meter Olympic qualifier Fred Kerley and Terrance Laird, who recently won a pair of national titles at LSU.

Meanwhile, in the women's pole vault, Katie Nageotte cleared the bar at 16 feet, 2¾ inches to set a new meet record and world lead. Morgann LeLeux and reigning Olympic silver medalist Sandi Morris placed second and third, respectively, to round out the team.