Former world champion Christian Sprenger says he is more concerned about fellow breaststroker Brenton Rickard having his reputation destroyed by a historic positive drugs test than he is of being stripped of an Olympic relay medal as a result of the bombshell.

Australian swimming is still digesting the stunning news that Rickard, 37, was found to have had the banned diuretic furosemide in a sample he gave eight years ago that has since been re-examined. 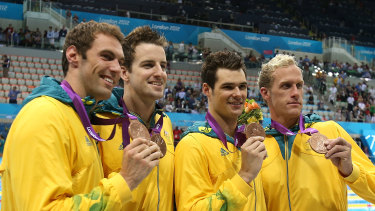 “There’s nothing we can do except hope that they see that this is clearly not intentional. The amount that was found – it just seems so clear cut. It’s clearly contamination,” Sprenger said on Sunday.

“I think there was an Australian in the 50km walk [awarded an Olympic gold medal retrospectively] a couple of years ago because they retested a drug test, so we’ve seen it work. But at the same time what they’ve found here is, in my opinion, not anywhere near substantial. If you look at his track record there has never been anything that would make you consider the idea of him taking drugs. It’s very strange that this amount could pop up on the radar.

“We’ve had a few swimmers obviously who have gone down this path and most of them have come out innocent which is great. But it’s just really disappointing because it just brands you in the worst way and it’s just so not him. He was instrumental in my career. There’s just no way this is up for debate, that there’s a chance that he did anything. I just don’t believe it at all.” 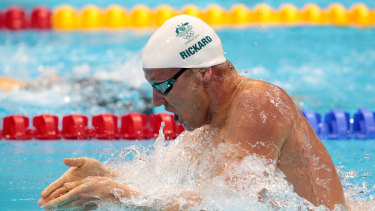 Brenton Rickard competes in one of the Olympic heats in London in 2012.Credit:Getty

Furosemide, which can be a masking agent for other banned drugs, is the same substance for which Beijing Olympic relay gold medallist Kylie Palmer tested positive at the 2013 world championships in Barcelona, where she finished sixth in the 200m freestyle.

Palmer also protested she had no idea how the low level of the prohibited diuretic came to be in her system – there was no trace of it in other tests conducted six days before and a day after the positive. After a protracted saga, she was not suspended. Instead she was given a reprimand and warning from world governing body FINA. Her placing in the 200m final at the world titles was removed from the record but she kept her silver medal from the 4x200m freestyle relay at the same meet.

“Ultimately if Brenton wins, everything is OK. But I hate seeing this happen to athletes that don’t deserve it,” said Sprenger, who won gold in the 100m breaststroke at those world championships in Barcelona seven years ago.

“This sport is built on clean athletes. It would be more disappointing watching him go down for this than probably losing that medal because he just doesn’t deserve it.”