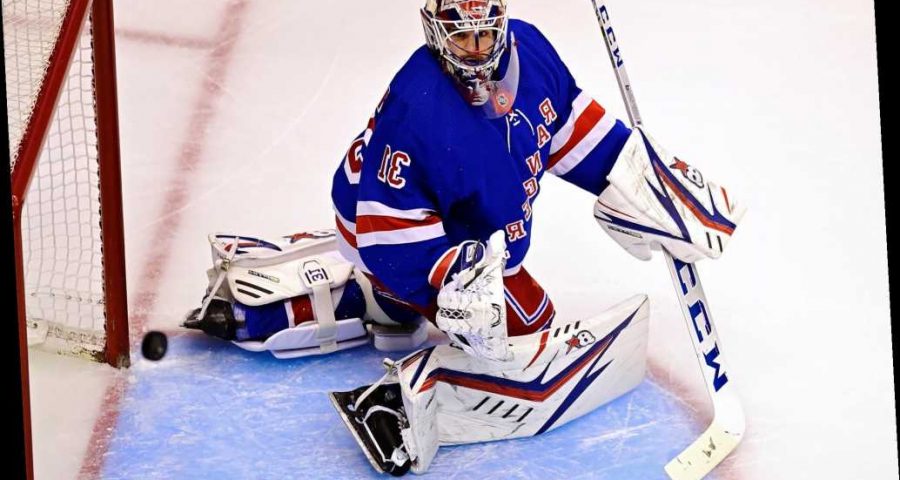 Rangers can use roster rules for big financial, developmental gain

Ryan Callahan retires: How he willed his way into Rangers force

Rangers must decide if captaincy would burden Mika Zibanejad

The Rangers goaltending lineage that runs from Davey Kerr to Chuck Rayner to Gump Worsley to Eddie Giacomin to Mike Richter to Henrik Lundqvist (with dollops of Marcel Paille, Cesare Maniago, Gilles Villemure, John Davidson, Hardy Astrom and Mike Dunham mixed in, let’s not forget) is a rich one, indeed.

And now to take his place among this lineage is Igor Shesterkin, who met all expectations and hype in his 12-game NHL cameo a year ago, and stands ready to inherit the mantle left behind by The King.

But keep in mind, because both Shesterkin and David Quinn certainly did, that Alex Georgiev is also here to serve.

“I don’t consider myself No. 1,” Shesterkin said Tuesday via translator Nick Bobrov. “I think we have two really good goalies who will do whatever it takes to help the team win.”

Shesterkin arrived in New York exactly a calendar year ago, Jan. 6, 2020, after spending the first half of his first pro season with the AHL Wolf Pack. When he started and won his first game the following night against Colorado at the Garden, that in effect marked the end of Lundqvist’s reign, though no one quite knew it at the time.

The remainder of the season, Georgiev started 13 games, Shesterkin 12 and Lundqvist, four. Over the final 19 matches, Georgiev received 10 starts, Shesterkin eight and Lundqvist, one. Shesterkin was sidelined twice by injuries, once through those sustained in an auto accident. He then missed the first two games of the qualifying round series against Carolina with a groin pull.

Still, Lundqvist was in the room. Still, he backed up Shesterkin in all but one of his starts and was there to lend advice, presence and support to both the goaltender and the team. Now, not, as the Swede prepares for open heart surgery.

“Obviously, sadly, Henrik is not here and we wish him all the best with his health, and speedy return to the ice to make the fans happy,” Shesterkin said. “As far as pressure is concerned, I don’t feel any pressure.”

Even though the Rangers have the fewest back-to-backs in the NHL, with only six, the 56-game season will lend itself to tandeming. That’s the plan, anyway.

“In this season, every team in the league is going to have to rely on their two goalies and we’re fortunate because we feel like we have two No. 1 goalies, and I’m not just saying that,” Quinn said. “Georgie has had a good career so far and he’s ready to take the next step, Shesty in a really small sample has proved he can be a really good goalie at this level.

“So, we feel we have great goaltending depth and both of these guys are going to be contributors and we’re certainly going to lean on both of them during the course of the season.”

And, of course, because the reach of the pandemic is unknown, the Rangers at some point might also have to rely on Keith Kinkaid, Tyler Wall and/or Adam Huska for a spell. There is simply no way to know.

We do know, however, that Shesterkin was lightning quick, unflappable, left few rebounds and moved the puck away from harm’s way and out of the zone with the elan of a veteran. The goaltender is, after all, 25 years old and was star in the KHL. Still, last year did represent a learning experience.

“I learned that if you catch the puck, you stay on the team,” said the jokester.

But also this, seriously, from Shesterkin in responding to questions about how he evaluates himself and the challenges the off-season presented.

“It was a very difficult pre-season due to no specific dates of commencement of [this] season, so some of it was very challenging, some good, some bad, but I’m happy we’re all here now working very hard to make the best season possible,” said Shesterkin, who spent the offseason in Russia. “As far as my comfort level coming back, obviously being sent down to the AHL doesn’t weigh on my psychology.

“I’m all in, my head is all in the hard work and doing everything I can do to be the best.”

Shesterkin was in New York for only two months before the season shut down. He only got those 12 games, plus Game 3 under the bubble against the ‘Canes. So his evolution as an NHL goaltender is difficult to assess.

“It is very difficult to judge oneself, so one has to ask the goaltending coach, or those who are observing my play,” said No. 31. “But I think I got quicker, I became better in choosing my position and reading the game. I think technically not much has changed, but I am definitely more aware and quicker.”

Quick as a blink, then, for the goaltender who, all protestations aside, is next in the Rangers royal line.