When Wests Tigers star Adam Doueihi was asked by reporters what he was doing with his free time as a result of the new self-isolation rules on Wednesday, he joked about his team "bonding" through video games.

"I'm not really into reading books," Doueihi said. "Everyone gets on at the same time … I reckon I'm the best. Josh Reynolds thinks he's alright, but he's no good."

It was a tongue in cheek response, but it points to a global opportunity that eSports Games Association Australia chief executive Mat Jessep believes the NRL is sleeping on during its time of crisis. 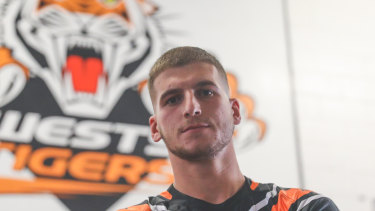 When Wests Tigers star Adam Doueihi was asked by reporters what he was doing with his free time as a result of the new self-isolation rules on Wednesday, he joked around about his team “bonding” through video games.

The esports market worldwide is on track to surpass $1.5 billion in revenue by 2023, and some sporting codes across the world are realising how esports can help in the age of coronavirus.

At a time when the NRL is threatened by "catastrophic" financial losses, Jessep believes a move online could be rugby league's saving grace, especially if the season is suspended.

Last week, when it was announced the NBA would be suspended, the Phoenix Suns decided they would continue the season – online. The concept provides both a platform for fans to engage with the club and a very real revenue stream.

"The Phoenix Suns will give fans a virtual fix as the first NBA team to continue the 2019-20 season," a Suns statement said. "While we await the return to the hardwood, hoops fans are encouraged to tune in to Suns games on Twitch."

Twitch is a video live-streaming service that allows gamers to stream their games for others to watch while they play.

English football club Leeds United took to popular video game FIFA to play a simulated version of their postponed match against Cardiff City. It has so far been watched by 200,000 fans on Facebook.

Similar to YouTube users, streamers earn money from donations, a cut from subscriptions people buy to use the service, as well as advertising, sponsorship and winning online tournaments.

"There are heaps of examples around the world where traditional sports can really work with and grow with professional, competitive video gaming, known as esports," Jessep said. 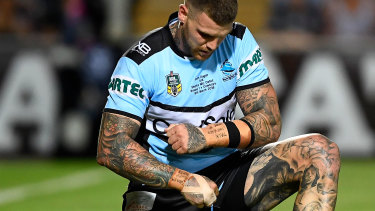 Josh Dugan using a Fortnite move after scoring a try in 2018. Credit:Getty Images

"That should be the NRL's first port of call. They should look at their playing group and say, OK, let's go on to some streaming on Twitch around whatever games you guys are playing at the moment, and let's involve the fans."

The NRL could have players take each other on in rugby league's game – Rugby League Live – as an alternative to the season, or opt for clubs to face off in popular global games like Fortnite or FIFA.

The concept could potentially provide a revenue stream outside the physical game, with the audience watching sponsored brands.

The correlation between gaming and NRL players went public when Josh Dugan celebrated a try with a Fortnite move in 2018. Last year, Dugan created his own Twitch account and regularly streams his PlayStation 4 sessions as a side hustle to his rugby league career.

"The average esports fan, outside of all the stereotypes of kids in mum's sewing room eating Doritos and chugging down Mountain Dew, the average esports fan is a 26-year-old male in an office job somewhere," Jessep said. "They've got a fairly large access to disposable income and they appreciate authentic partnerships that are presented to them via their interest in esports."

Esports was a revenue stream adopted by Australian codes long before the coronavirus crisis.

In 2017, the FFA announced the introduction of an E-League, an initiative designed to connect fans who play the FIFA game with the A-League.

In 2017, the Adelaide Crows AFL club made the unprecedented move to acquire a professional esports team.

At the time, Crows chief executive Andrew Fagan said involvement in the rapidly growing esports industry would broaden the scope of the club's fan engagement, brand and commercial platform.

“It is hugely popular with Millennials and there are enhanced opportunities for current and new corporate partners to engage with younger, digital and social-media savvy audiences,” Fagan said.

Last year, the NRL recognised the connection between esports and rugby league and partnered with an esports media company to host a Fortnite tournament for fans at the ANZ Stadium precinct on NRL grand final day.

Jessep said getting players involved should be something the NRL considers in case the competition comes to a standstill. It could also help during the self-isolation period.

It gives the fans something to cheer about. That's what eSports do – they appeal to a fan base.

"You could have competitions still across the country without exposing players to things like travel and exposure to potential harm," Jessep said. "If the NRL decides to run an online competition, at the end of the day, it gives the fans something to cheer about. That's what esports do – they appeal to a fan base.

"If the actual club gets shut down and they can't rely on things like poker machine revenue, then they have to think outside of the square … or things will look pretty grim."

Esports filling the void for broadcasters

In a time where the likes of ESPN, Fox Sports and Kayo are desperate for content, esports are filling the gap.

Already there has been a 20 per cent lift in the number of students playing in a university-specific league as classes move online in Australia. One of the biggest esports leagues globally, the ESL Pro League, has seen its viewership break last year's record by 24 per cent as a result of the coronavirus crisis.

7mate has begun to air esports in some non-peak time slots, but gaming providers are preparing for far more knocks on the door.

Alex Blaikie, from ESL Australia, said providers of esports were already in talks with major broadcasters.

"This is the perfect time for any of the traditional broadcasters – Seven, Nine – to get on board and fill in some programming slots where there might have been your traditional sports," Blaikie said. "We are having a few discussions, we've had people start to reach out to us who might not have previously in the past few years."

Darren Kwan, founding president of the Australian eSports Association, said there was "a lot more demand coming" simply because "everyone is bored now".

"The doors are open," Kwan said. "We're willing and have the industry to work with the rest of market.

"It a huge potential for our sport to be working with major broadcasters and the like because we are largely unaffected. This is a time to get noisy."